Oxygen Therapy To Survive And Thrive Day To Day? If You Need It, You Do It

The origin of most respiratory illness is still not precisely known, especially since the number and extent of atmospheric pollutants - including fracking chemicals - has risen dramatically in recent years.  But we do know an average of 7 million around the Earth now die from air pollution alone each year according to a recent WHO study.  One of the respiratory conditions probably underdiagnosed is bronchiectasis - which I have, e.g.

This was difficult to accept at first,  but after a  subsequent controlled sleep study:

And reaching oxygen thresholds peculiar to COPD  (87- 88%), it was recommended going on oxygen therapy.   This happened with some degree of resistance as I could not imagine myself -  a guy who used to jog 1.5 miles every other day - now having to use oxygen.  But when a pulse oximeter at a pulmonologist's showed O2 levels dipping into Covid territory (76-77%) it was no longer debatable.  Indeed, I'd already found myself barely able to walk to the nearby Safeway, having to stop multiple times on the way,  breathless.  Even my wife, on our walks Sunday, found she had to wait for me now to catch my breath.  It was ridiculous.

The pulmonologist herself didn't make sport, asserting I needed to go on oxygen therapy - preferably at night - to get the full benefit. She recited again the need for it in relation to how numerous organs - from lungs, to heart to brain  to kidneys - depend on it for adequate function.  So definitely not wishing to end up like a Covid patient on a ventilator I agreed and she ordered O2 support.  This arrived from a local company in the form of a machine called an oxygen concentrator, 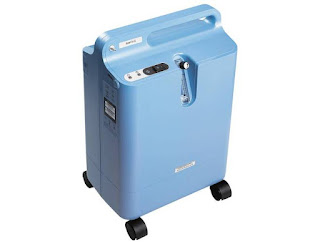 The machine basically extracts oxygen from the air in the room and it's then pumped through tubing into a cannula which is inserted in the nose.  It was exactly the same system used in the sleep study.

What I've found is that nightly use has made a world of difference to my quality of life.  Whereas before I was struggling to just get up an inclined stretch on our street, I am now able to speedwalk again as I did yesterday morning - and look forward to doing when Janice and I go for our walk this weekend.  Oxygen levels - while still not as great as hers (because I do have bronchiectasis) - are generally in the range of 91- 93%.

In fact, in our recent trip to Telluride at the end of September, I was not only able to handle its much higher altitude than Colorado Springs (of 8,700 ft. vs. 6, 400 ft.)  but even go to higher altitude via gondola to Mountain Village at  9,500' e.g. 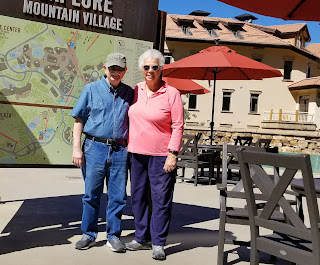 With Janice at Mountain Village, higher than Telluride

Telluride as seen from gondola going up to 10,500'

This was also possible because I had the use of an O2 concentrator sent in from the nearby town of Montrose, thanks to Medicare.  The use of the machine every night made it possible to not only survive at the much higher altitude for 10 days but to thrive.  The message for those with any kind of lung issue is simple: If you have need of oxygen therapy  - for whatever reason - you use it.

If conditions worsen, and they might with the lung condition I have, I may be able to get a portable oxygen tank to use when walking. I am not there yet, not by a long shot, but if and when the day comes I should be able to get one.  (Right now they are in short supply because of heavy demand from long term Covid patients).

Will I ever get back to jogging even a mile every other day? Not likely, but at least I am happy to be able to do much more aerobic exercise than I had earlier this year.

Needless to say I plan to get the Moderna booster as soon as possible. With an ongoing respiratory condition affecting the bronchial tubes I simply cannot afford to play the fool at my age - not with Covid infections still high in Colorado.  This is also another reason I resumed taking low dose aspirin every day .  This, after the urologist reported an office blood test showing a hematocrit value of 63%.  Something he'd "only seen before in stroke patients."  That hematrocrit value meant that 63 percent of the blood cells were red, far too many - so my blood was literally "clogged" up with them-  producing a high stroke risk.  (The pulmonologist conjectured the red cells - so many - were trying to compensate for the lack of O2 in the lungs, i.e. to get it to other organs.).

It just goes to show whatever the new guidance "recommendations" on anything they do not necessarily apply to everyone.  Check with your own health provider before adopting them.  And if tests  - like pulmonary function - or even a simple pulse oximeter,  show you need an oxygen assist, get it!

Posted by Copernicus at 7:13 AM