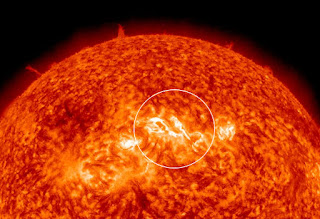 CME captured by the Solar Dynamics Observatory in  2013

CMEs or coronal mass ejections, are intensely energetic eruptions of magnetized plasma from the solar corona. They are not to be treated lightly,  given they are the primary driver of what we call space weather. Powerful CMEs  are of such magnitude that they merit the name "Carrington events" and originate at the solar central meridian (relative to Earth observers) are events we wish to avoid.

The "ultimate" CME then is that which smacks us broadside, knocking down power grids like tenpins, and can disrupt other critical services, (communications, GPS) dependent on spacecraft. Hence, it is of interest to attempt to forecast these plasma monsters.
Alas, currently we have only near real time forecasting, one of which has resulted in a CME alert for today and tomorrow. e.g.

The current CME arose from a spectacular X 10 solar flare in sunspot region 2887.  This has been described by the Space Weather site as the strongest flare yet in the current cycle.  It was triggered on Thursday, the 28th.  Given the plasma  is propagating at an estimated 973 km/s and the Sun is at a distance of 150 million km this gives an estimated arrival of approximately 2 days.  This means the major effects are expected today, and likely delayed effects into early Sunday.

I plan to be out observing the northern sky from just after  dusk today and from midnight to roughly 2 a.m.

Brane Space: Ensemble Modeling of Coronal Mass Ejections - A Superior Means Of Prediction? The Jury Is Still Out (brane-space.blogspot.com)

The Northern Lights didn’t make an appearance in Colorado Saturday night after all.

“The Northern Lights turned out to be a bust last night,” said Ron Hranac, past-president of the Denver Astronomical Society.

Cloudy skies blocked the view for most Coloradans, but even if it had been clear, the effects of the sun’s flare weren’t strong enough to make the Northern Lights visible in Colorado.

Posted by Copernicus at 1:57 PM