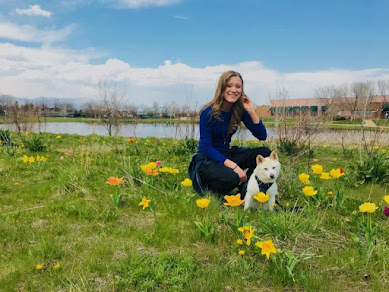 Sally Rose Strelecki with her dog, Niyah, near Centennial.

Minneapolis Mayor Melvin Carter echoed the sentiments of many when he said Sunday afternoon:

This was after a shooting early Sunday at a St. Paul MN bar left 14 wounded and 1 dead.  Witnesses reported the victims' wounds were "horrific" and most will require extended care. Taken in the carnage was Marquisha Wiley - a 27-year-old veterinary technician from St. Paul.

Barely a week earlier, in Colorado, another 27 year old woman was the victim of a bullet fired from the other side of her apartment wall. Now she lies in a medically induced coma fighting for her life.

Sally Rose  Strelecki, age 27  of Centennial,  was simply preparing food for her pet pooch Niyah last Saturday around 11:30 a.m. when a bullet ripped through the back of her head - fired from the other side of her apartment wall from a neighbor's unit. She  is currently in critical condition, on a ventilator and in an induced coma at Littleton Seventh Day Adventist Hospital. according to her mother, Amy Graham.

Sally had graduated from CU Boulder and was in the process of looking for a medical career when this horrific event occurred, triggered by a moron neighbor who fired his weapon at his girlfriend in a fit of rage. Mickel McLean, 26, has since been arrested as a suspect in the shooting, the sheriff’s office said in a news release. McLean was booked into the Arapahoe County jail for investigation of first-, second- and third-degree assault, illegal discharge of a firearm, felony menacing, and reckless endangerment.

McLean told investigators that he and his girlfriend were arguing over use of the bathroom when they struck each other several times. He then started packing his belongings. They continued arguing, and McLean grabbed a 9mm handgun. He struck his girlfriend in the left knee, and the gun went off, the affidavit said.

The girlfriend gave a different account of the incident: She said he pointed the gun at her from about 8 feet away and in a fit of anger to scare her he fired one shot in her direction.  Strelecki was standing at a kitchen counter, preparing to feed her dog, when she was struck  Her fiancé Nick - after hearing a loud bang - raced in from an adjacent room to find her lying down, head in a pool of blood.

"I just don’t understand how she can be in her kitchen making food for her pets and then all of a sudden get shot in the head. You are supposed to be safe at home. I don’t understand.  Apparently you aren't safe in your own home anymore."

Emma, you are correct, because the country has gone batshit nuts in regard to gun control - with insane pseudo 2nd amendment types not even allowing thorough background checks, national registration and licensing - like we do for automobiles.

The family is now faced with hundreds of thousand of dollars in medical bills which is a crime in itself.  And given she's already had two operations and is indefinitely in the ICU that doesn't even likely include later rehabilitation, psychological therapy if she survives.  It just isn't right.

But this is the aftermath of a near fatal shooting for too many  victims in this country. Major uncovered costs. Such costs include inpatient care, follow-up surgeries and other treatments, mental healthcare, rehabilitation and skilled-nursing care, durable medical equipment, personal care, and living costs while the patients are not able to work.

The needs have been exacerbated by the proliferation of health plans with high deductibles and coinsurance requirements, leaving patients exposed to many thousands of dollars in cost-sharing. Severely injured patients needing repeat surgeries may hit their out-of-pocket spending limits multiple years in a row, forcing them into bankruptcy. On top of that, even insured patients may face big balance bills if they are treated by out-of-network providers.  According to Dania Palanker, an insurance expert at Georgetown University's Health Policy Institute:

"There are enormous costs involved in living with a gun injury.  For many people those costs, such as personal care support, are not considered medical care by our insurance system."

Pardon me, but this is outrageous, and shows the barbarism of the health care system.  Which even now progressives are doing their best to expand but are being dismissed as "socialists" and "commies" for their efforts.  Which is disgusting.  What is to become of those like Sally Rose Strelecki - if she survives her traumatic head wound and needs years of rehabilitation?  A truly moral and decent society would find a way to pay for such extensive needs.  California and some other blue states protect consumers from such bills. (California victims can also get help with medical expenses and income loss from the California Victim Compensation Board.)

But most red states - Reepo states,   do not. For them each citizen is on his or her own, even if shot in the head (like Sally Rose) while in their kitchens preparing food for their pets.  It's insane.

Especially given the victims and their families aren't the only ones who will be affected financially by the mass shooting. Taxpayers, too, pick up much of the tab for the health care costs associated with gun violence because many patients are covered by Medicaid and Medicare, two government insurance programs.

A number of hospitals treating victims of mass shootings, such as Sunrise Hospital & Medical Center and Dignity Health's St. Rose Dominican in Las Vegas, have announced policies of reducing or waiving payments from these patients. But that only addresses part of the financial issue.  What about the lost pay from being unable to work?  If ever there was a justification for universal basic income (UBI) this is it.

Especially as patients with gunshot injuries may require extensive rehabilitation, physical therapy, speech therapy, high-end wheelchairs, home modifications and long-term mental healthcare. Even patients with insurance may have limited or no coverage for such services, Napier said. For shooting victims and their families who don't receive assistance like Orlando Health offered after the mass shooting there, it's a part-time job to manage the bills and arrange all the services, particularly if a person needs highly specialized care away from their hometown.

As for Sally Rose Strelecki, her family says their biggest concerns now are her medical bills and her rent.   Those who'd like to assist (I already have) can go to a  GoFundMe page started Friday by the fiancé’s family members.  Right now this is the best we all can do given there is little state collective support, or proper insurance coverage available.

Hey, Jeff Bezos! How about paying the medical bills of Sally Rose Strelecki and all the other gun victims shot this past year so far in the U.S. ?   Johns Hopkins University estimates an average of $2.8 billion is spent yearly for medical treatments of gun wounds in the U.S.  This is a drop in the bucket for Jeff.  But again even Bezos' deep pockets can't cover the costs of all the victims' medical bills over time resulting from the gun carnage.  This is why we now need a model patterned after California to cover those medical expenses, along with a change in insurance to cover victims extended needs.

In the meantime citizens need to keep pressing to get the nation's 15 m assault weapons under control, starting with voting out the NRA's puppets in all 50 states.