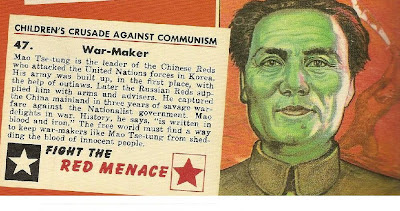 Brainwashing 'Know your Commies' trading card for kids, from 1952 .

"The  chaos at Del Rio is all according to communist party  plan.  The heat wave is icing on the communist cake.  Joe, Nancy, AOC  et al are patiently waiting for conditions to get so dangerous that the only solution will be to take them in.   Then they will have the migrants needed to build a commie state!"   - WSJ commenter, Sept. 20

That commie hysteria is again infecting the country has been evident to anyone reading the comments in assorted major news papers - whether the WSJ, Denver Post or  Miami Herald.  Most recently it has focused on the influx of Haitians to the Texas border at Del Rio.   Also, the size of the "build it back better"  Dem $3.5 trillion bill  referred to as "socialistic" or "Democrats moving toward communism".  There's no end to it amongst the Densans. It appears any divergence from massive military spending over domestic social spending is now "socialism" or "communism".

If anyone doubts the extent to which we're manipulated to be pawns for the military-industrial complex and corporate capitalists they need to read Douglas Rushkoff's "Life, Inc."   Rushkoff documents how Americans' minds have been manipulated to become puppets for the speculator and war state since the advent of Edward Bernays, and his work, 'Propaganda', describing how the non-elites can be manipulated by the right PR. Most of us have been dumb, compliant zombies ever since- starting with Woodrow Wilson's use of Bernays' works to get us involved in WWI.

Personally, I don't think they could tell us diddly. They need to have instead read Naomi Klein's book,  'The Shock Doctrine: The Rise of Disaster Capitalism' (2007).  As Klein describes, the shock doctrine's basis of "disaster capitalism" was to deliberately use assorted confected crises - whether military  or economic- to justify subverting the will of many other nations and their citizens to make the world "safe" for global capital. In one chapter where Klein coins the term "disaster capitalism" she analogizes it to the electric shocks delivered via certain tortures, say to a person's head & genitals. The shocked victims became so mentally incoherent, terrified -  that they were ready to accept just about anything demanded of them.

In the case of Russians,  following the fall of the Soviet Union (who comedian Bill Maher once described as abused children), Klein notes that after only a year of Neoliberal thuggery and "market therapy" millions of had lost their life savings when the ruble lost nearly all its value. Adding insult to injury, abrupt cuts in government subsidies meant that millions of workers had not been paid in months. Consumption? The average Russian consumed 40 percent less in 1992 than 1991 - and they weren't even consuming that much in '91!   Basically, to survive, the Russian middle class was forced to sell all or most of their belongings - setting up card tables on the streets to do so. As Klein describes this travesty:

"Desperate acts, that the Chicago School of Economics praised as 'entrepreneurial' and proof that a capitalist renaissance was indeed under way."

Wonder why the Russians of today are deeply skeptical and affronted by the Neoliberal rogues and puppets of the G20?  Look no further than recent Russian history and how the uber - capitalists twisted and perverted the country's whole economic foundation in order to force it into a globalized capital new world order.
4) Communism fosters uniformity.

This myth has its roots  in the fact that too many Americans are unable to distinguish equality from homogeneity. Perhaps this derives from the tendency of people in capitalist societies to view themselves primarily as consumers.    Is being a U.S. Consumer better than anything? George Carlin in one of his skits: "Yeah, you can get your pick of 110 boxes of cereal in a supermarket. But can you pick a President from more than two parties?"

In other words, we inhabit a world of false choice. We have all the choices we want in the material realm but not in the realm it counts, in economics or politics.

Meanwhile, to the American, the residing dystopic fantasy is a supermarket wherein one state-owned brand of food is available for all items, and it’s all in red packaging with yellow letters.  An exaggeration cleverly confected and spread by who else.....capitalists!  In fact, Americans are now paralyzed by over choice, and there are actually tomes out there on the "paradox of choice" and how too much paralyzes us. Personally, I'd rather go into a store - as in Barbados or Guyana- and see one brand and type of Catsup - as opposed to being confronted with 23!  That over-choice wastes time, just as the incessant emails all begging for one thing or other....a "nation of salesmen" - each with his own pitch!

But people do a lot more than consume. One thing we do a huge amount of is work in capitalist society, and as Rushkoff shows (pp. 50-51) the capitalist system is set up to keep workers on an never ending work-spend treadmill.  The very act of using credit sets one up for more debt and hence more work. The act of getting a car loan or home loan, puts one even further in the hole, requiring more intensive labor to keep each of those symbols of the American Dream. The greater the debt, the more work needed to support it. In this way the capitalist elites could keep people in line, and prevent them from getting too insightful about the system in which they were enmeshed - such that they might challenge it. They remained good little dutiful do-bes with time only to labor, and maybe catch some TV at night, in between zzzzzzzs.

And if capitalists would dangle their multiple baubles in front of these working masses, they might actually get them to spend more than they earn - and thereby commit even more intensively to drone-hood. If capitalists could also get the masses to become "share holders" in the stock and bond markets they controlled, so much the better. Then any major correction or crash could wipe out their paper wealth to the capitalists' benefit - while the poor schmuck who lost his market bet would have to work on indefinitely. Hmmmmm....cat food and kibbles while working til 90?

And so Friedrich Engels, the co-author of The Communist Manifesto was right when he wrote that this indebtedness, sought or unsought, is just the yoke the capitalists needed to keep labor in line. Add the over-reproduction of people, and you put them in an endless trap of labor surplus, with the employer able to call every shot to the point of being outright abusive. What's the drone to do? Quit? there are twenty people waiting to take his job, thanks to the labor surplus.

Think capitalism is the greatest thing ever and vastly superior to communism? Hold strain until its "lease" on this nation (and planet) has finally expired then render your verdict! Wait until all our water is befouled from fracking and whole communities are soiled from Keystone XL pipeline leaks, even as cancers soar from all the toxic chemicals in our foods and air.  And we won't even get into the nasty cancers awaiting in our corporate-supplied GMO foods! Wait until the climate change catastrophe hits the massive heat wave level, and there's no turning back from the runaway greenhouse - because oil, fossil fuels were excavated by greedy capital beyond the critical threshold the Earth can bear (2200 gT). Oh, and wait until we now have to go into Iran and yes, start another war ....for oil!
See Also:
Communism | Socialism
Inspection- Down the Politically Correct Anti-Socialism Memory Hole
by Ken Carman | October 7, 2021 - 6:27pm | permalink 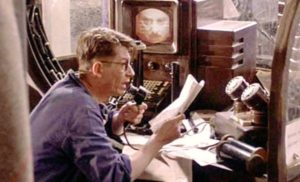