A former Dallas psychiatric nurse (Diane Holloway Cheney) who wrote several books (under the name Diane Holloway) has claimed to have done a "psychological study of Oswald throughout his life".  Also on that basis determined she was "sure he had to be"  JFK's killer.

This is a mind -blowing revelation, i.e. without even reckoning in the ballistics disclosed in the key films (e.g. Nix, Zapruder). Especially given that there is no clear, discernible motive on record for why Oswald would want to kill Kennedy.

Holloway Cheney's's claims appeared in a recent issue (Sept., p. 18) of the Intertel journal Integra in which she replied to a number of "disappointing offerings" (mostly mine) that had recently appeared in several preceding issues dating from last September.  The issues began with my criticism of Clay Shaw defender Patricia Lambert, e.g.

And subsequently developed into an exchange on whether the assassination was the result of a conspiracy or by a lone assassin - a position held by another member.

Make no mistake that Holloway's  claim of penetrating Oswald’s mind to expose him as the lone assassin, if true, would be earth -shaking in its import.  This is given there is no record of Oswald ever having made any incriminating statements, or issuing hateful words against  JFK.  Indeed, the opposite is true.  As recently as 1993 his widow - Marina Oswald Porter - was adamant (in a 3oth anniversary NBC interview with a truculent Tom Brokaw) that Lee had "always liked and admired" JFK.

This is why Holloway's claims are so startling, also given Oswald was killed before he could undergo any truly valid real time psychological or psychiatric analysis.  Even the Warren Commission - LBJ's whitewashing creation -  was "unable to reach any definite conclusions as to whether or not Oswald was sane under prevailing legal standards." (Warren Report, p. 375)

Hence, it is impossible to know Lee's mental state at the time of the assassination which is why serious researchers don't pursue it. It is more productive to look at visible (physical) objective effects, i.e. in the head shot and associated physics of the other reactions to the shots.

We also have no idea how much actual direct interaction she had with Lee when he was alive, i.e. on which to base her "lifetime study". For example, by comparison, author Truman Capote  (‘In Cold Blood’) spent over 1,000 hours interviewing Richard Hickock and Perry Smith – the Clutter family killers.  This elicits the question of how many hours Holloway (her author surname) spent interviewing Oswald. 50? 100? 1,000 ?   The answers here are decidedly relevant to how much ballast we ought to put in he claim of knowing the mind of Oswald, and that he was the lone assassin.

Let us note two things here: 1) Assembling 2nd hand information about a person and then putting it into a book is not a "psychological study".  And 2) Psychological studies by their nature are subjective and the general consensus now is that psychology is the least trustworthy science in terms of proving its claims or theories.  From 'Live Science':

"There was something wrong with psychology. A cascade of warning signs arrived all at once in 2011. Famous psychological experiments failed, over and over, when researchers re-did them in their own labs. Even worse, the standard methods researchers used in their labs turned out under close scrutiny to be wishy-washy enough to prove just about anything. Nonsense, ridiculous claims turned up in major journals. It was a moment of crisis....For scientists who had dedicated their lives to this science and these methods, it was as if the rug had suddenly been ripped out from under them.

This is why proclaiming one has psychological insight is not a slam dunk in trying to prove a man is an assassin by claiming to know his mind. Indeed, Holloway  in her response admitted she didn't really evaluate Oswald to any depth, but instead focused on Gen. Edwin Walker - the right wing schemer and segregationist removed from any official capacity by JFK.  But somehow she believed she knew Oswald's mind enough to write his "autobiography" "The Autobiography of Lee Harvey Oswald" . In fact, it was autobiographical fiction.

After all, everyone knows an autobiography can only be written by the person himself (or herself) and while alive.  This is why the prefix "auto"  (self) is used. You simply cannot take words - even taped at different times off a TV or in media - and insert them into the subject's mouth for different events and call it an "autobiography".  But this is why serious Kennedy assassination researchers are not distracted by psychological mumbo jumbo, looking instead at the physics of the reactions to the rifle shots, and the actual autopsy photos taken at Bethesda which I already showed, e.g. 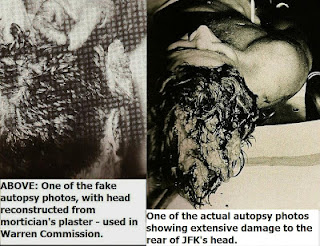 Holloway in her Integra reply says she "worked for the doctor that pronounced the president dead."  Then she must also have been aware of Dr. Charles Crenshaw who noted the gaping hole in the rear of Kennedy's head which could only have been made by a shot from the front - with bullet momentum blowing out the rear.  Hence she must have seen this 'giveaway' head wound showing Oswald could not have been the killer .  This is given he was allegedly firing from behind the Kennedy limo - from the Texas Book Depository.  As Dr. Crenshaw wrote in his book ('Conspiracy of Silence', p. 4):

"Through the years, there have been a thousand instances when I have wanted to shout to the world that the wounds to Kennedy's head and throat that I examined were caused by bullets that struck him from the front, not the back, as the public has been led to believe"

As Oliver Stone pointed out in his 50th anniversary interview on Democracy Now:

"I've had a fair of amount of combat experience.  When you look at the basics of the film, it's all there it doesn't need to be elaborated upon.  You see Kennedy get hit in the throat, then you see him get hit in the back then get hit from the front. When he gets the hit from the front he goes back and to the left. That's the basic evidence because he gets hit right here (pointing to right temple).  Many of the witnesses at Parkland and Bethesda saw a massive exit wound to the rear of his skull. Doctors at Parkland, including McLelland, saw the remains of his brain almost falling out the back of his skull.... When people are in combat they go with the bullet wounds and directions of firing inferred from them.  This is essential.  From this we know there had to be at least one shooter from the front."

Parkland surgeon Robert McClelland even confirmed this at the time, and repeated his head wound disclosure for the HSCA in 1978: 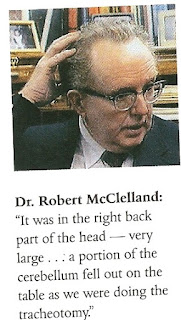 Along with half a dozen other Parkland attending physicians including Dr. Charles Crenshaw.

In her reply to the Integra editor Holloway also writes that she "had access to the papers collected by (Dallas) police from Lee and his Russian wife's apartments. I saw things that others never saw."

But can she believe what she saw? Former British Intelligence officer John Hughes-Wilson concurs with former Justice Dept. agent Walt Brown ('Treachery in Dallas', Chapter 'Blue Death) ',and author James Douglass ('JFK and the Unspeakable') that the Dallas cops were part of it.  As Walt Brown notes (op. cit., p. 163 ):

"Virtually every piece of evidence was questionable, tainted or destroyed for judicial purposes, at the time, by local authorities.  Willing to appear to look foolish while in reality harboring a fear that Oswald would go public in a genuine judicial proceeding."

Clearly the Dallas cops needed a backup plan - likely in concert with the Dallas mob - to stop Oswald so he wouldn't talk.   Jack Ruby then became the hit man to do the job, and no doubt the cops left lots of incriminating materials behind to fulfill the CIA's sheep dipping of Oswald.  I.e. painting him - using confected  evidence -  as the sole assassin.  All that Holloway's claim of "having access to things others never saw"  really means is she was privy to first hand sheep dipping materials to paint Oswald the way the conspiracy's architects (not the shooters- mechanics) wanted.

The Dallas cops' original orders (likely from Dallas Mob boss Joe Civello) were to kill Oswald at the Texas Theater so there'd be no chance of his ever getting his say at a public trial.   Douglass (p. 292) makes it known that the Dallas cops who entered the theater approached Oswald (in his seat) "almost as if they were provoking the suspected police killer to break away from his seat ..which would have given Tippet's enraged fellow officers an excuse to kill him".

But Oswald did no such thing. He knew their game and he wasn't stupid.  Nor did he attempt to fire any shots. Lee clearly and obviously knew by now he'd been set up as the patsy and the last thing he wanted to do was make these Dallas cops his judge, jury and executioners. No, he wanted to have his trial and his say, and let it be known how and why he'd been set up. So, rather than mindlessly react he expressly said: "I am not resisting arrest! Police brutality!

Hughes-Wilson cites his own source (p. 176, 'JFK - An American Coup  d 'Etat') who overheard two Dallas cops talking about how Oswald was to have been killed before he ever arrived at the station. One, in a snarling voice, said to the other (ibid.) "You were supposed to kill Lee....you stupid son of a bitch, then you go and kill a cop". Referring to the shooting of officer J.D. Tippet.

So there were snafus along the way. Even the best planned conspiracies can go awry, but in the JFK case  the architects ensured there was always a back up plan. In this case, to recruit former Chicago mobster Jack Rubinstein, aka Jack Ruby, to snuff Oswald if he survived the theater encounter with the cops.   Thus, all that her claim of inside "access" means is that she was privy to tainted, sheep dipping materials designed to paint Oswald the way the conspiracy's architects desired.

What comes through in all of this?  That Holloway needs to broaden her purview out of the narrow and subjective psychological domain - which - without the ancillary data points - tells us little about what really happened on 11/22/63.  A basic course in Newtonian physics would also work wonders to promote better genuine insight into the case. 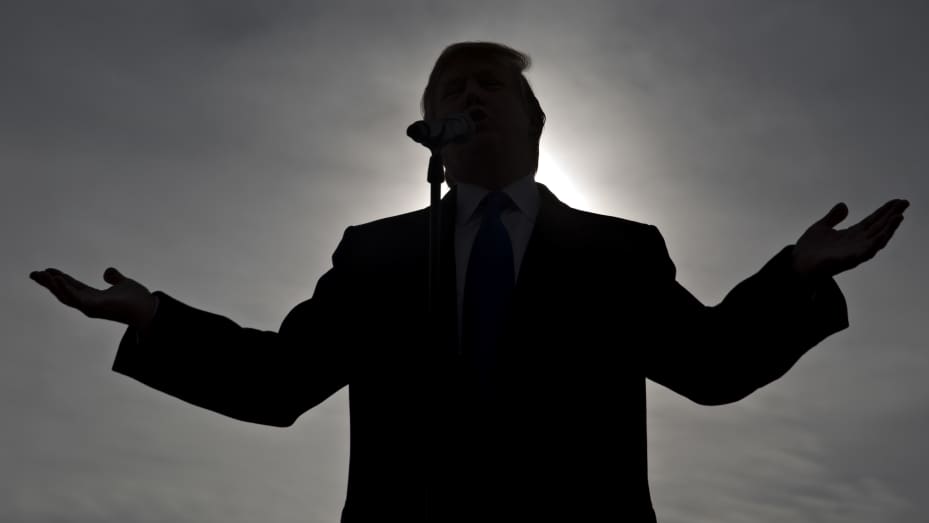