The basic principles of photoemission and the photo-electric effect were first examined in this post five years ago,

The basic idea is that radiation (e.g. UV light) falling on a metal plate or surface elicits ejection of electrons ("photoelectrons") from the surface and a photo current.   The maximum kinetic energy of these electrons can be found if the stopping potential  ( Vs )  is known.  This is the potential reached when most photoelectrons are stopped (so the photocurrent becomes zero).   Modern experiments to do with this effect go far beyond the basic concepts to investigate many other aspects of matter including electron band structure.  This is the range of energy levels electrons can have within a solid.

Flash forward to the present: Angle-resolved  photoemission spectroscopy (ARPES)  may not be a familiar technique (or talking point) for most physics aficionados, but new experiments using it have shed light on electron band structure.  According to a February report in Physics Today  (p. 21) Julien Madéo and Michael Man, both at Okinawa Institute of Science and Technology in Japan, and their coworkers,  turned to this method  for observing dark excitons.

In ARPES, incident photons kick electrons out of a target material and the electrons’ energies and momenta are measured.   E.g. 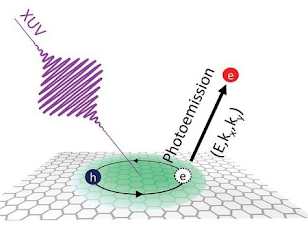 It’s a preferred technique for probing electronic structures. But experimental challenges have prevented its application to excitons: The experiment must have extreme-UV (XUV) photon energies to break apart the tightly bound electron–hole pairs in solids and eject photoelectrons. Needed here is sub-picosecond temporal resolution to follow the exciton population’s evolution, and micron-scale spatial resolution to probe tiny samples of high-quality exciton-hosting materials.

Focus once more on solids, and note the "band gap" refers to ranges of energy the electrons do not have.

When a valence electron jumps across a bandgap to the conduction band, it doesn’t always escape the hole it left behind. In some materials, Coulomb forces are strong enough to hold negatively charged electrons and positively charged holes together in neutral electron–hole pairs known as excitons.

Excitons come in two types, bright and dark. A bright exciton forms when a single photon is absorbed. In the case of dark excitons, the electron and hole are connected by an optically forbidden transition, meaning the electron didn’t reach the conduction band through photon absorption alone—it also needed phonon scattering. Because they may form or recombine through many possible pathways, dark excitons are difficult to study through the usual optical methods.  Hence, the choice of ARPES by the Okinawa team to do the research.

The novel application of the preceding technique enabled the Okinawa Institute team to detect both bright and dark excitons while also monitoring the populations over time. Creation of excitons using two different photonenergies produced the same surprise result: Dark excitons were twice as prevalent as the bright ones.  This finding showed the importance of dark exciton dynamics in understanding the opto-electronic properties of exciton rich materials.

The Madéo - Man team focused attention on one particular material: tungsten diselenide.  This bulk material has only an indirect bandgap - with the peak in the valence band and the lowest point of its conductive band having very different momenta.  The graphic below illustrates the differences - taking Energy v. wavevector (K): 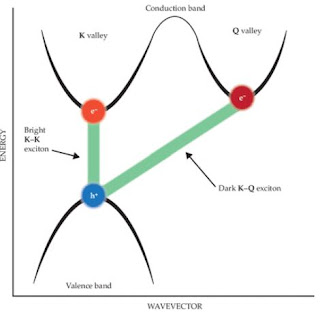 The point is that the band gap can't be traversed using photon absorption alone.  But as can be seen from the graphic, monolayer tungsten has both a direct and indirect band gap - so can host both dark and bright excitons.   The latter - created via direct transmission make the material photo-luminescent.

As the attentive reader can see from the diagram, the conduction band has minima at two wavevectors,  K   and  Q  in the standard nomenclature - which are denoted as K and Q "valleys".    The valence electrons can be excited into one or other of these valleys - which have nearly the same energies but different momenta.   As can also be seen (lower left) the valence band peaks at the K wavevector.  Thus only a few eVs photon will be able to push an electron across the band gap into a K valley, i.e. to form a K-K exciton.

However, the incoming photon has too little energy to impart enough momentum to push the electron into the Q valley.  This is why K-Q excitons are called "dark".  What is needed to provide the extra kick to make the transition happen? Usually a phonon. These are basically particles of heat, best visualized in crystals - for example - as trains of atoms that behave like springs. 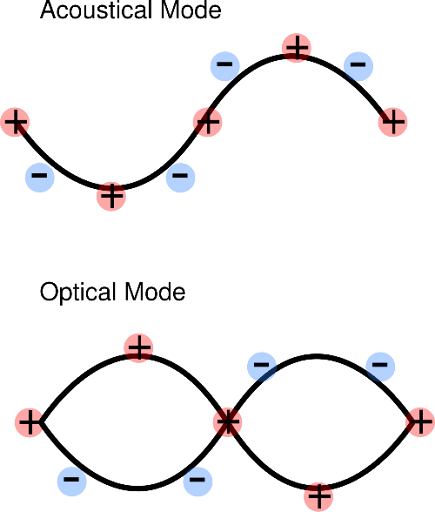 When one atom in the train gets pushed or pulled it sets off a wave (phonon) that travels through the crystal. In reality,  most materials have a mix of phonons with different frequencies, all superposed on each other - and traveling in different directions.

It will be interesting to see what applied research comes out of this electron band research. One possibility?  Molecular probes to investigate the molecular dynamics of assorted materials and how that can be used to examine the effects of mechanical stress by converting it into some kind of optical signal. Some progress, indeed, has already been made according to the PT  report.

Posted by Copernicus at 6:51 AM