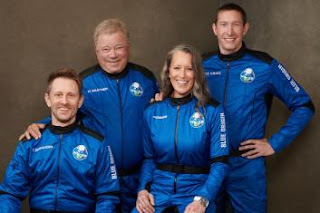 The Blue Origin crew before liftoff 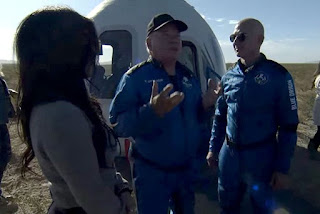 Jeff Bezos’ and his Blue Origin group pulled a PR coup when it flew the actor William Shatner (with 3 others)  to the edge of space Wednesday morning.  Make no mistake that Star Trek's "Captain Kirk" was the highlight of the launch with an estimated 1 million Trekkers worldwide watching on assorted streaming media.  After all, following 55 years since Trek began its fans wanted to see the show's  "captain" get his first real space venture.  But alas, it was barely to the edge of space, 66 miles up.

Blue Origin conducted the flight  on its "New Shepherd" vehicle at roughly 10:50 a.m. ET, and brought them back around 10 minutes later in a passenger capsule that deployed parachutes for the landing. The company had targeted a 10 a.m. ET launch, but held it during final preflight checks, according to a live stream.

Shatner strapped in alongside Audrey Powers, a Blue Origin vice president and former space station flight controller for NASA, and two paying customers: Chris Boshuizen, a former NASA engineer who co-founded a satellite company, and Glen de Vries of a 3D software company. Blue Origin would not divulge the cost of their tickets. (But educated guesses put it at $100 m apiece.)

Shatner, 90 years old, was emotional and effusive in his space observations and what it all meant to him afterward.  He is now the oldest person to reach space. After he exited the capsule Wednesday morning, he said he was struck by the contrast of the blue atmosphere with the black expanse of space.  But let's be clear his exploit would have been a lot more impressive if it had been launched on one of Elon Musk's Space X rockets, see e.g.

That's because it would really have traversed near space to an altitude of 360 odd miles - as opposed to 66 miles. Would "Captain Kirk" also have been a lot more impressed with what he saw and experienced? You bet.  How could he not be in a mission lasting at least two days?  But say one thing say the next, we don't know if Elon Musk is a Trek fan, but we know Bezos is. Turns out the Amazon founder had a cameo as an alien in one of the later “Star Trek” movies — so little wonder Shatner rode free as his invited guest.

Still, die hard Trekkers would have loved to see Shatner  a.k.a. "Kirk" venture much deeper into space.  Such an exploit would at least have matched the (fictional) docking altitude of the show's  Starship Enterprise. Of course, all this would have presupposed a Musk invitation but that didn't happen, Bezos beat him to it.  Then too, for a 90 year old guy the much shorter (10 minute) venture was probably much more physically tolerable.

When he alighted from the capsule after Bezos opened the door, Shatner was effusive, saying:

"Everybody in the world needs to do this,”

Well, uh yeah, Bill, if we can each get hold of a couple hundred million bucks!  But as I said in my July posts-  after the Branson and Bezos launches  -  this is why "space tourism" can never be the commercial enterprise the media has hyped it to be.  There simply aren't that many billionaires to be able to afford regular launches.  So right now you either have to win a lotto, get a massive inheritance from super wealthy parents....or be specially selected by Bezos, Branson or Musk.