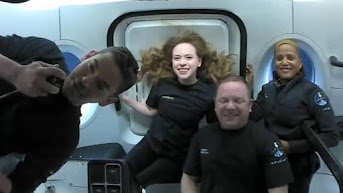 Inspiration 4 crew taking in the view

Give Kudos to Elon Musk and St. Jude Research Hospital.  Four amateur astronauts lifted off from the Kennedy Space Center on a Space X rocket Wednesday evening and made space history, with Musk basically putting the other two (space jockey) billionaires (Jeff Bezos and Richard Branson) in total shade.  The reason?  Musk actually penetrated near Earth space and went far beyond with this exploit featuring 4 civilians.

The recycled Falcon rocket roared skyward from the same Kennedy Space Center pad used by the company’s three previous astronaut flights for NASA. But this time, the Dragon capsule aimed for an altitude of 357 miles (575 kilometers),  and actually achieved 363 miles just beyond the Hubble Space Telescope. Oh, and 100 miles higher than the space station.

The launch, dubbed Inspiration4, was the first step in what is planned to be an audacious three-day journey in orbit around Earth by a group of people who just months ago didn’t know each other and didn’t expect to fly to space.

SpaceX confirmed late Wednesday that the spacecraft had hit an altitude of about 363 miles, exceeding the intended orbit. The flight marks another leap forward by Elon Musk’s SpaceX, which has vowed to open the cosmos to ordinary people, not just professionals trained by the government, in a quest ultimately to land humans on Mars.  Indeed, Musk fully intends to land a trio of space farers on Mars by 2050 and is evidently looking for volunteers.

To be sure, civilians have  joined professional astronauts on trips to the International Space Station in the past.  Also, school teacher Christa McCauliffe was the first ever civilian to fly into space - aboard the Space Shuttle Challenger - but which blew up only minutes after launch.  In many ways that terrible event awakened people to the fact that space is risky and not like just flying on a jet plane.

Earlier - in July - civilians also accompanied Richard Branson’s Virgin Galactic and Jeff Bezos’ Blue Origin in an effort to show the feasibility of  paying customers on suborbital flights.  But those two missions barely  touched the edge of space before falling back to Earth.   Nothing like what Musk pulled off with his Dragon 9 rocket ship two days ago.  In fact, never before has a crew made up entirely of civilians reached orbit — two of whom won their seats through a competition and sweepstakes.

Those two can thank Jared Isaacman - an accomplished pilot who flies fighter jets in aerobatic competitions. He paid an undisclosed sum for the mission, though he told Axios it was less than $200 million, and turned it into a fundraiser for St. Jude Children’s Research Hospital.

His first pick to accompany him on the flight was Hayley Arceneaux, a 29-year-old from Memphis who works as a physician assistant at St. Jude's. As a child, she was treated for bone cancer there and made it her goal to work there and help others. As a result of her cancer, she had a rod placed in her leg, making her also  the first person with a prosthetic to go to space.

The other crew members, Sian Proctor and Chris Sembroski, won their seats. Proctor, 51, a licensed pilot who is also an artist, poet and college professor from Phoenix, won a competition by using Shift4′s software to build an online store and create a video outlining her space dreams. In it Proctor, who was a finalist for the NASA astronaut program in 2009, read a poem calling for what she called a J.E.D.I. future, which she described as Justice, Equity, Diversity and Inclusion.

In a briefing for reporters before the launch, she said she was honored to be the fourth African-American woman to go to space and the first to serve as the pilot of a mission.

Sembroski, a 42-year-old father of two from Everett, Wash., won by donating to the St. Jude fundraiser. A friend of his was initially selected for the seat but backed out and offered it to Sembroski, who works at Lockheed Martin and served in the Air Force.

The Falcon 9 lifted off at 8:02 p.m. from iconic pad 39 A, which SpaceX leases from NASA .   But the space agency has over the years invested heavily in the system, awarding SpaceX billions of dollars of contracts over the years so that the company could fly cargo and its astronauts to the station.

Watching the lift off on MSNBC's  All In, Janice and I agreed this event was much more awe inspiring than the Branson and Bezos flights.  This was a true space mission not merely to the bare edge of space but going higher than any other craft except for the Apollo lunar missions. Their view of the Earth was magnificent with the entire orb captured through the view windows - not merely portions. Moreover, the crew of the Inspiration4 mission stood in stark contrast to the Bezos and Branson crews and  more like a slice of America.  People from different walks of life, of different ages and with different life experiences (including cancer), whose voyage to space was as much happenstance as design.

In a  Netflix series documenting the mission, Isaacman and his team ask SpaceX about the feasibility of flying above the space station. An unnamed SpaceX employee responds by saying, “intuitively going slightly above would not present a problem.” But he added that it “will start to stretch our margins. And there may be other problems that I’m not aware of in other subsystems.”  Another employee warned, “Yeah, it’s not one particular thing, it’s just opening Pandora’s box.”

Notably, the crew were warned in advance that if anything went amiss there would not be a way for them to just escape- say by transiting to the space station  - 100 miles below. Their only recourse would be to truncate the mission and come directly back to Earth.  As for "Pandora's box", all of us who watch these latter -day space exploits need to be reminded that space travel is risky.  The complex, chemically -powered machines  that lift humans into space are still basically "controlled  bombs" for which anything can go wrong.  We are lax in thought and naive if we believe otherwise..  Space rockets then are not vehicles for joy rides or to be taken as larks. People who sign up - or who win lotteries for space trips - still need to be reminded they do so at their own risk, and no space mission can ever be 100 percent safe.