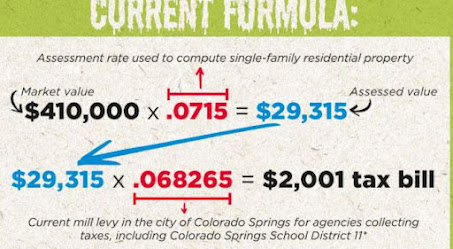 Colorado Springs latest property tax assessment formulas are now available and the denizens are not thrilled. The sad fact? Unless one is a senior and eligible for the Homestead exemption on property tax totals,  many will be priced out of their homes in the coming years.

The problem in this state is that the property assessment formula hinges on a small percentage of homes which is then applied to all homes for sale. Thus, if the average price for  a 2%  subset of 3 bedroom, 2 bath ranch homes on the market in the state spikes by 14% then that increase in value is applied to all such homes.

This method contrasts, for example, with California where property taxes (thanks to Proposition 13 passed in 1978) are automatically limited to 2 percent increase per year - with the state taxing properties based on the last sale amount.

Our own ranch -style home was purchased in 2001 for $148,500.  But on recent re-appraisal the new value has gone up to $365, 200, or more than double. Based on the current formula (see graphic)  that means our property taxes would go up to $1,782.   Fortunately, the homestead exemption applies so the taxes are reduced, i.e.

Which is still much higher than our original tax bill  of $675/ yr.  But without the homestead exemption we'd have to do some serious budgeting, especially as our dental expenses thus far this year have come to almost $4,000.  (Another reason we'd like to see Medicare expand to cover dental.)

Other seniors, of course, are in much more parlous circumstances, and may have to consider moving if there is no relief.   Speaking of which, the 2022 bill is actually lower than it otherwise would be thanks to Senate Bill SB21-293 which lowers the rate of assessment a smidgeon - about $54 a year for us.  This bill was adopted in an effort to (somewhat) moderate the impact of repealing the  Gallagher Amendment of 1982,

That amendment had kept property taxes in check for nearly 40 years.   Many people have described the repeal of Gallagher as "a circuit breaker removed", which may not be an exaggeration   Fortunately, another bill is in the pipeline after SB21-293 expires. That bill would enable any property tax bill with increase over 4% to be deferred.  According to Dem sponsor Chris Hansen:

"If citizens property taxes were to go up more than 4 percent they can defer everything over 4 percent."

Note the key word is 'deferred' not 'removed'.   Thus the deferred portion serves as a lien on the house and won't come due until the house is sold- or so we are promised.  According to Hansen:

"You can think of it as protection for people on fixed incomes."

Well, we would certainly hope so.