Looking Again At The Heisenberg Microscope - In Particle & Wave Approaches

The Heisenberg microscope is a theoretical device used to teach basic quantum mechanics. We visit that again, in order to become more clear on what exactly is meant by the "particle" and "wave" observational limits.  Below I show the basic layout of this hypothetical device: 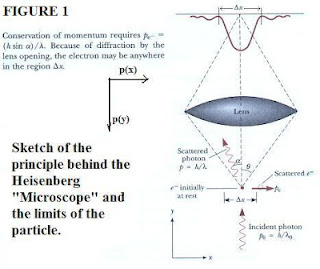 Particle approach:Consider a measurement made to determine the instantaneous position of an electron by means of such a microscope. In such a measurement the electron must be illuminated, because it is actually the light quanta (photon) scattered by the electron that the observer sees. The resolving power of the microscope determines the ultimate accuracy with which the electron can be located.

The resolving power is computed to be approximately: 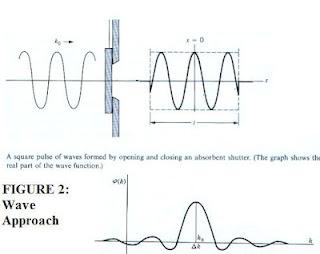 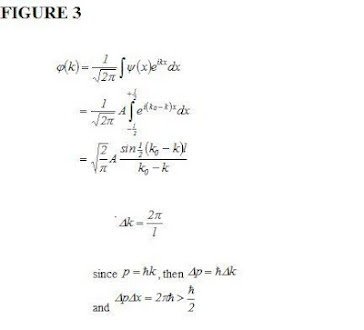 Thus, the same device can be used to obtain uncertainty principles for particles and waves, in slightly differing limits.

Whether a particle or wave will be visible depends on the scale of  Δ(k) in relation to Δx . The wavelength in general will be such that  l    »  1/k. I.e. as k retreats in size,  l  becomes larger.Technically, the wave-particle duality is actually a reflection of the Principle of Complementarity in Quantum physics. usually expressed via the Poisson brackets (with non-commuting variables x, p):[x, p] = -i h = -i h/ 2pwhere h is the Planck constant of action. If two variables a, b commute, then one has:[a, b] = (a*b - b*a) = 0if not, then: [a,b] = (a*b - b*a) = -1and we say a and b are 'non-commuting'. (You may observe one aspect at any one time, but not the other).In term's of Bohr's Complementarity Principle, the variables x (position) and p(momentum) are regarded as "mutually interfering observables". This is why only one can be obtained to precision, while you lose the other.In another sense, one can think of approaching a particle in such way (or with such apparatus as the Heisenberg microscope) that it suddenly gets 'wavy' (on account of the scale of k in relation to dx). At that stage, as Bohm notes, the particle aspect vanishes and you have a wave.