Yes, That 'Painted Lady' In Austria Was Real - And Human 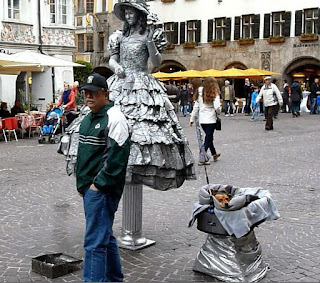 At start - no money yet 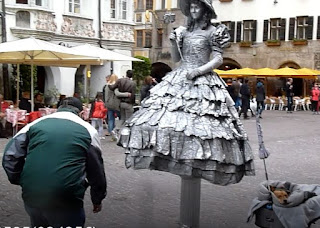 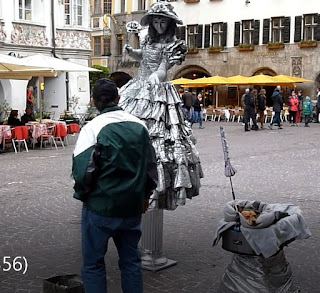 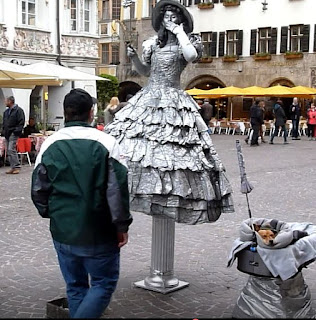 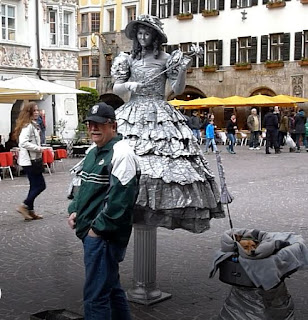 The "Painted Lady" of Innsbruck, Austria. She looks exactly like a statue - totally immobile - until you put money in her small basket, whereupon she comes to life, bows, and then curtsies.

Now a bit of lighter fare and diversion.  On sending a pic of the 'painted lady' of Innsbruck back to my (late) brother Jerry in June, 2013, he refused to believe she was real.  "That's just a statue they set up next to the live dog to make you think she's real."  He argued,  "Then they get suckers to put money into the basket, but nothing happens!"

I eventually got Jerry to believe the silver- painted lady was no statue  by isolating frames from a video Janice had taken, after I tossed a euro into the lady's basket.  You can see her change of posture in the sequence of images shown above.  However, Jerry still wasn't convinced it was a human woman, responding:  "Aw, that just proves it was an audio-animated robot like those ones they have at Disney World, in the Hall of Presidents! She probably makes the same motions each time, just like a robot!"

I tried to convince him that her movements were not robotic, but he wasn't buying.  "Did she speak to you?  Say, 'thanks' or anything? Then how do you know?"

Well, you can't win them all!

But real and human she was, one of a subset of "street characters" we had found in both Innsbruck and Salzburg.  Their shtick was to do moderate "performances" - like the lady gesturing, blowing a kiss- after receiving money.   However, we learned they disdained the term "beggars" and opted for "mendicants"  instead.  For example, the 'Charlie Chaplin' mendicant in Innsbruck: 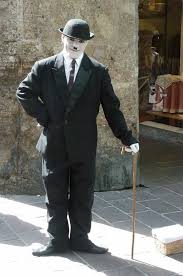 Was almost as popular as the painted lady, and faithfully performed - delivering a bow, and a brief jig - after receiving a euro in his gold- tinted container.  It is difficult to know - based on little knowledge - how much these mendicants earned from their labors but we were informed by other tourists they were at it from  dawn to dusk.  So these were likely their only gigs.

Clearly, the classier term "mendicant" suited them better than "beggar" because - in truth  -they were not begging.  They basically just displayed themselves in their particular areas and awaited interest (and euros) from any passersby.  They didn't approach people - like in the U.S. - and ask for money.

"Beggars"  more fitted  those who were otherwise unemployed and earned money via a street existence- depending on the charity of others to earn their daily bread.  Doing this by approaching strangers and outright asking for money.  In Innsbruck (and Salzburg) by contrast the mendicants adopted a chosen costume and performed after receiving an unsolicited amount of money from a tourist.  They never directly approached or harangued people for money.  Merely hoping to entice donations by appeal to elaborate costumes and performances.

These creative mendicants  were allowed to ply their trades in assorted locations in Austria because the respective  authorities felt they contributed something to the culture, the atmosphere.  Each street character, whether the "Headless Puppet", Painted Lady and "Charlie Chaplin" in Innsbruck, or "Mozart", and assorted RC "Cardinals" in Salzburg, knew their stuff and how to appeal for sustenance with aplomb - while refraining from aggressive begging.  This I believe is also what encouraged so many to drop euros into their baskets.

This is an art form, make no mistake. Having seen how panhandlers operate in cities from Miami to New Orleans to San Francisco to Baltimore, they could take a lesson or two from the magnificent mendicants of Austria.  These interesting street characters understand how gauche and unseemly it would be to simply beg, so they turn their need for money into practical street theatrics. Given this, they invest in costumes or uniforms as well as cultivating distinct identities - with appropriate,  correlated artistic performances-  as opposed to bare bones beggaring.One primary attribute stood out above all others: There were NO aggressive moves toward any passersby.  Every single mendicant respected space,  including encroaching into other mendicants' staked out realms.

I've always noticed in the U.S. cities mentioned,  apart from having no shtick or costume, most panhandlers  approach rapidly and aggressively  toward their targets and either scare them off, or turn them off. Thereby they forfeit a possible buck, and are rebuffed in their pleas instead. They fail to grasp that if one goes into begging, at any level, some type of social interface is needed to ease the transaction.A costume and a shtick (some performing act - singing, dancing etc.) can also help by deflecting the inevitable attention away from the implicit begging itself.  In this way, the European mendicants appear to have achieved something their U.S. counterparts can only dream of, i.e. encouraging passersby who willingly put out cold hard cash for what they believe - and actually are - receiving! So it's not a one-way take.
For both Charlie Chaplin" and the Painted Lady (and her dog) in Innsbruck, I believe I delivered at least 4 euros in total to them, probably two to each. Then, over in Salzburg, I estimate I gave at least one euro to a mendicant Catholic "Cardinal"  who was about to drag a "heretic" (dummy) before his Inquisition, and another 2 eu. to a "Mozart" giving an excellent rendition of the Violin Sonata in B-flat. Oh, I also gave one euro to the Headless Puppet in Salzburg.

The magnificent mendicants of Austria are an excellent example of how people can work in cooperation to earn a living by performing - despite the fact that for one reason or other the society itself won't grant them a paying gig. So, they create their own gigs!What will their futures be? Will they be able to go on like this indefinitely?  Maybe til they're 60 or 70? We don't know, but are confident they will continue without any problems as long as they live, remain healthy, and the Austrian government allows them the freedom to do what they do without interference or imposing too many regulations.

Posted by Copernicus at 4:45 AM