"Perhaps the most grating fact is that not one person in the party, not even the loudest mouthed jackasses or most shamelessly fascistic Republicans, will just come right out and say it: They don't like the January 6 commission because they disagree with the committee's basic premise that fascist insurrections are bad. Instead, Americans are being treated to a whirlwind of deflection, gaslighting, victim-blaming, and even victim-mockery"  Amanda Marcotte, smirkingchimp,com

"Some far-right pundits who are critical of House Speaker Nancy Pelosi's select committee on the January 6 insurrection have argued that Democrats simply need "get over it" and move on rather than continue to dwell on what happened seven months ago. But one of the problems with that argument is that insurrectionists themselves haven't gotten over the 2020 presidential election, buying into the Big Lie and the debunked conspiracy theory that the election was stolen from former President Donald Trump. And a troubling University of Chicago study finds that almost one in ten Americans favor violence in order to put Trump back in the White House."-  Alex Henderson, 'The Adamant Insurrectionists', smirkingchimp.com

"Make no mistake about it. Without racism running deep in their DNA, Trump's supporters would not have listened to a raving maniac president encouraging violence in order to remain in power." -  C.J. Polychronion, smirkingchimp.com

Wifey and I sat spellbound yesterday morning as four D.C. police officers who defended the Capitol on Jan. 6 delivered stinging testimony of how they were viciously attacked by terrorist traitors. Each officer described a harrowing confrontation with the traitors, at the first  House select committee’s public hearing.

The hearing represented the beginning of the committee’s efforts to investigate the events on Jan. 6, when Traitor  Donald Trump’s supporters stormed the U.S. Capitol, temporarily interrupting the certification of Joe Biden’s victory in the November election over Trump.

Naturally , tensions on Capitol Hill have only worsened since the insurrection, since the Repuke liars and traitors would prefer to send the day's events into a permanent memory hole. The last thing the scum want is public airing of their treachery. Thus, the vile spectacle of so many Republican rats playing down or outright denying, the violence that occurred and denouncing the Democratic-led investigation as politically motivated. But the actual testimony of the four officers showed it is Repuke attacks and revisionist efforts that are politically motivated.

Capitol Police officer Aquilino Gonell related how he and fellow officers were beaten repeatedly and that he thought he would die. “We fought hand to hand, inch by inch,” he testified.  Gonell said that he was troubled by any effort to play down the severity of the attack.  He said:

“There is a continuous and shocking attempt to ignore or try to destroy the truth of what truly happened that day, and to whitewash the facts,”

But why be surprised because this is what fascist traitors caught red -handed in multiple videos do. They try to abrogate reality and events by ceaseless minimizing, whitewashing, deflecting.  Which is exactly why this select committee is so critical. As journalist Adam Serwer pointed out on ALL In last night, "Even if this committee uncovers nothing new, if it can actually set down an official, historical record of what  occurred and why it occurred-  it will have been worth it."

Mr. Gonell's testimony was followed by that from Michael Fanone.  His anger was palpable as he said:

"I feel like I went to hell and back to protect them and the people in this room.”

Then pounding his fist on the table in front of him, he screamed:

"Too many are now telling me that hell doesn’t exist or that hell actually wasn’t that bad. The indifference shown to my colleagues is disgraceful.”

Daniel Hodges from Washington, D.C.’s Metropolitan Police Department, testified next.  He was the officer seen in a video being crushed in a door frame as he tried to prevent the renegades from breaking into the chamber.  Notably, in his account he referred to "the terrorists" no less than 15 times.  When asked why he used that term by Rep. Jamie Raskin, Hodges pulled out a book with the criminal codes for domestic terror and terrorist, to show the definition was fulfilled by the Trump mob.  Including the terrorist Ashli Babbit that the Right's traitor scum now want to try to remake into a martyr and patriot.

Officer Hodges was followed by Harry Dunn of the Capitol Police. Dunn's testimony was memorable in relating how he had been called "nigger" to his face by the Trump traitor slime,  for the first time in his life and while in uniform. In his words,  after he heard the mob shout: "Joe Biden is not the president, nobody voted for Joe Biden" and he replied "I voted for Biden. Does my vote not count? Am I nobody?"

He then related how that "prompted a torrent of racial epithets"  and a woman in a pink MAGA shirt yelled (from his actual testimony - not my words, his): "Hey guys, this nigger voted for Joe Biden.  Then the crowd, perhaps of about twenty people, joined in, screaming 'Boo! Fucking nigger!'  No one had ever called me a nigger while wearing the uniform of a Capitol police officer."

Confirming once and for all the degenerate nature of the mob in their full white nationalist, racist dimensions.  This mob of dirtbags who sought to block the peaceful transfer of power.  Fellow citizens?  Hell no.  To me they will always be animated human sewage, like Trump their master.  That goes for the commenters whose crap I saw on the Denver Post's account of the proceedings. Including from one ape named 'Redir':

Not everyone blindly accepts the results of a rigged election. Obviously the left is not interested in facts, otherwise they would not stonewall the audits at every turn, and the media declaring the end results of investigations even before they begin. How "scientific" and Constitutional

Clearly a Trump troll whose IQ is in the low 50s given he's swallowed the swill of the big lie, and believes the "audits" carried out by the Cyber Ninja kooks are real and legit.  Which I already pointed out should have been shut down by the DOJ by now, e.g.

Then there was this twaddle posted by 'Skullbones', or was it Numbskull bones?

It has one goal and one goal only - score cheap political points.

1/6 riot/trespass was serious and the perps are being punished by courts. But Democrats/Media had politicized/weaponized it beyond all recognition by 1/7. At that point, the ONLY reason Democrats/Media cared about 1/6 was that they calculated that it could be used to elect Democrats. No fair minded person should care one bit about their bloviation and grandstanding about “saving the republic” blah blah blah,

At least this degenerate  got called out for his nutso bilge by other posters, and that included at least 22 'thumbs downs'.  This low grade imbecile can't even comprehend that the testimony of the officers was not "grandstanding" but the brutally honest disclosure of the crap they had to contend with from the Trump terror apes.   This asshole wouldn't even be so pompous with his piffle if the facts of 1/6 weren't so brutal and showed exactly what the red cap MAGA traitors did. As for being "used to elect Democrats", yes it should.  Because it shows the other party isn't even legitimate any more but a personality cult full of seditionists, traitors and fascist goons. Oh and liar revisionists.

It seems like another world now, but shortly after the insurrection, almost every Republican denounced the violent mob — and some criticized Trump himself. Given the traitor had told his supporters to “fight like hell” to overturn his defeat. But too many have softened their tone in recent months as the revisionist meme of "patriots" protesting has taken hold.  Some 'pukes have gone further, with Georgia Rep. Andrew Clyde saying a video of the rioters "looked like a normal tourist visit” and Arizona Rep. Paul Gosar repeatedly saying that a woman (Ashli Babbit) who was shot and killed by a Capitol officer-  doing his job as she was trying to break into the House chamber-  was “executed.” Others have falsely claimed that Democrats or liberal groups were responsible for the attack.   This is the level of desperation to dodge responsibility one beholds when cowards and liars cannot own up to the insurrectionist crimes of their tribe.  Hence, also explains the yen to whitewash events or misrepresent them.

Even as the testimony was going on, an assorted  gaggle of Repuke revisionists assembled for a "news conference" in front of the Justice Dept.  They included such illustrious imps as Paul Gosar, Marjorie Taylor Greene and Matt Gaetz.  Before they could blab three minutes of lies, i.e. the insurrectionists were "political prisoners", protesters appeared with large signs i.e. "Traitors and Rapists"  and the rats tucked their tails between their legs and scattered, even as reporters shouted out to Gaetz: "Are you a pedophile?"

As Gaetz, maggot that he is, rushed off to a waiting vehicle, it was worth every second to savor his abject cowardice.

One of the best short summations of the hearing was from S.E. Cupp writing for the NY Daily News, noting:

The first Jan. 6 Commission hearing exposes the ignominy of what the  GOP has  whitewashed. Heroes  choking back tears, shared graphic and emotional details: Screaming for help, preparing to die. Republicans chose to lie and defend this."

Republicans chose this because of their all-consuming consciousness of guilt, knowing they abetted and participated in one of the darkest days in American history in over 200 years.  We can never, ever let them forget it!

Democracy is under attack. Washington journalists must stop covering it like politics as usual.

The select committee is already exceeding all expectations

The use of clear language — Rep. Jamie B. Raskin (D-Md.) spoke of “fascist traitors” while D.C. Police officer Daniel Hodges referred to “terrorists” — was a refreshing departure from mealy-mouth descriptions that obscure the violence and the ideology of the insurrectionists. It was critical to hear the granular description of that day, especially as it helps to expose the galling dishonesty and appalling bad faith of Republicans.

Jan. 6 police officers give a master class on the dangers of right-wing extremism

Conservatives and the Right
The Right-Wing, Including Trump, Is Making and Marketing Ashli Babbitt Into a January 6 Martyr 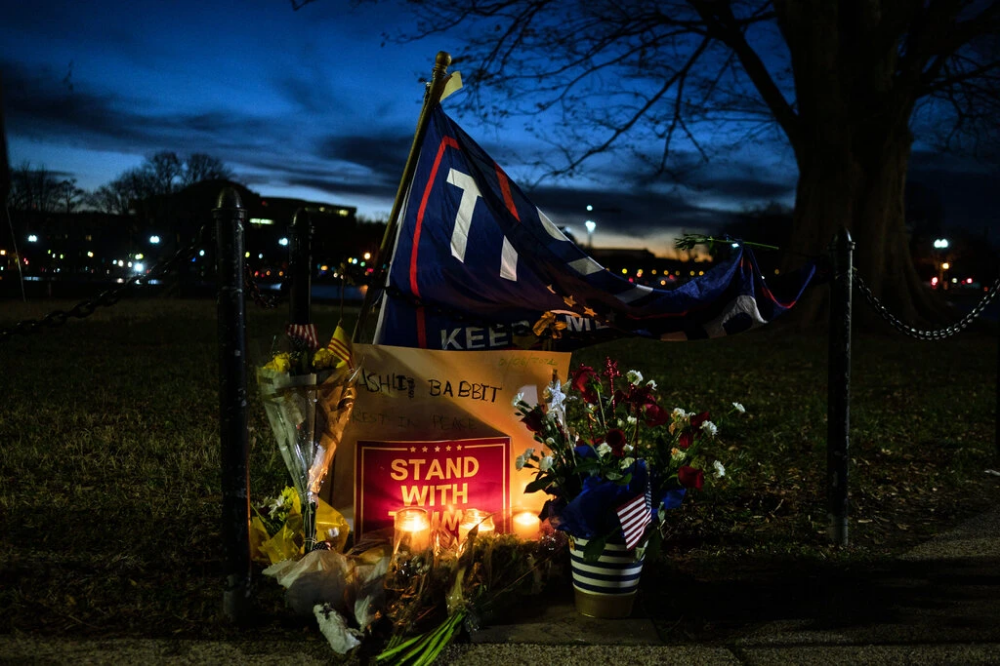 Posted by Copernicus at 5:21 AM