Another Terminal Disease (Pulmonary Fibrosis) Or Just A Big Scare? I Will Soon Find Out 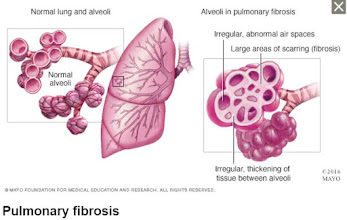 Pulmonary fibrosis   (according to Wikipedia) is a condition in which the lungs become scarred over time. Symptoms include shortness of breath, a dry cough, feeling tired, weight loss, and nail clubbing. Complications may include pulmonary hypertension, respiratory failure, pneumothorax, and lung cancer.

There is no cure and there are limited treatment options available. Treatment is directed towards efforts to improve symptoms and may include oxygen therapy and pulmonary rehabilitation. Certain medications may be used to try to slow the worsening of scarring. Lung transplantation may occasionally be an option.

It was the last sentence that struck me, and made me realize I might have another terminal disease on top of advanced prostate cancer.   For me the lung issues had been building over the past two months:  more and more difficulty breathing, problems catching my breath and even doing short walks at a snail's pace approached 5K level.  This,  when I use to speed walk a  mile every other day.  It was downright disheartening and this - combined with very low oxygen readings (e.g. 77-  83% on Janice's pulse oximeter), convinced me to make an appointment to see a pulmonologist.  That was last week.

The initial diagnosis after in -office tests and examination of the lung x-ray - showing scarring on each lung  - was pulmonary fibrosis. But given there might still be some uncertainty, a series of lung CAT scans were also ordered and I had those done yesterday.   Now. it's a matter of waiting to learn whether it is indeed  "PF"  and whether oxygen tanks will be part of my daily life for the foreseeable future.

According to the Mayo Clinic website it is the scarring which gives the disease away - and that's already shown up on the lung x-rays .    I.e.:

Pulmonary fibrosis is a lung disease that occurs when lung tissue becomes damaged and scarred. This thickened, stiff tissue makes it more difficult for your lungs to work properly. As pulmonary fibrosis worsens, you become progressively more short of breath.

The scarring associated with pulmonary fibrosis can be caused by a multitude of factors. But in most cases, doctors can't pinpoint what's causing the problem. When a cause can't be found, the condition is termed idiopathic pulmonary fibrosis

That "idiopathic"  form is more or less what I am expecting.  But we will see.  As for symptoms, Mayo lists:

All of which I have except for the last.  Basically, I am now accepting the worst diagnosis and will just deal with it if confirmed.  In the meantime there are Barbara Ehrenreich's words from a NATION piece she wrote in October, 2018  ('The Great Equalizer'):

"No matter how much effort we expend, not everything is potentially within our control, not even our own bodies and minds."

As I recall some recent black humor rendered after the pulmonary specialist visit:

"It will be interesting to see what takes me out first, the prostate cancer or the Pulmonary fibrosis."

Janice was not amused.  She is instead looking for support groups - and ordering oxygen tanks.

Posted by Copernicus at 6:39 AM