After Portland and Lytton Are Humans Even Ready For The Cusp Of The 'Runaway Greenhouse'? 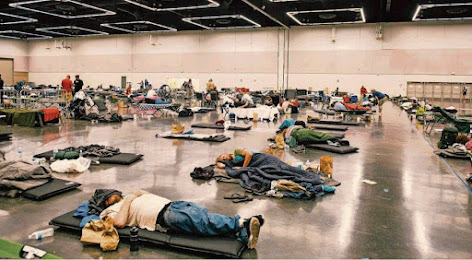 The unprecedented heatwave in the typically mild region of the northwest that has claimed hundreds of lives (in British Columbia), and dozens in Oregon and neighboring Washington state, is the latest in a series of extreme weather events that have struck globally.

Recently, Australia, California and Siberia have all experienced deadly wildfires caused by extreme heat. In Death Valley, California, it reached a fear-inducing 53.2C (127.7 F) a record high for June.

The increased frequency of such weather events raises serious questions over whether humanity is prepared for the consequences of global warming, and whether society can feasibly recalibrate for a warmer planet. In particular would humans be able to even survive the cusp of the runaway greenhouse effect, likely to begin in 50-75 years?  At this rate, very doubtful.  Just look at Portland and Lytton, B..C.

Lytton, B.C.  reached a high of 49.6C (121.3F) on Tuesday, the day before its residents evacuated as raging wildfires devastated the town.  In Portland according to one official:

“People were literally crawling to the Sunrise Center because it was so hot. They were vomiting, burnt and dehydrated,  Hundreds of people came through because we had water stations, misters and a shower truck as the temperature reached 116.6F. “Had Sunrise not been there . . .”    ”

Had it not been there indeed.  And what of the power grid that supports it? We're informed now that the residents of Seattle and Portland are trying to get a/c for their homes - and orders are backed up.  But as one official pointed  out, 'Our grid is not designed for such intensive use of air conditioning.  The grid will be overloaded.."    According to Dr Jennifer Vines, lead health officer for Oregon’s tri-county region-   on surveying the apocalyptic scenes-   and quoted in The Financial Times.

"There is an emerging consensus that this is some kind of new normal,”

Leading to the question, how will communities adapt to constant power grid breakdowns arising from electricity overuse - say during 3 or 4 week long heat waves-   at the cusp of the runaway greenhouse? The answer isn't clear apart from utility companies rationing the 'juice'. This may mean doing without electricity for extended periods each day, perhaps up to 12 hours or more. Can Americans adapt to such rationing? I am not sure.

Adapting to the soon to be spreading virulent diseases is another matter. How will we tolerate or adapt to much more  tropical diseases such as dengue fever, malaria, and even cholera? The assumption currently is there are no problems, but clearly those who believe that haven't read Laurie Garrett's book,  The Coming Plague, especially the Chapter Nature and Homo Sapiens'.

How will a basically "captive" (i.e. no emigrating) population adapt to accelerated anti-biotic resistance and the spread of newer, more virulent bacterial infections as the heat ramps up?

On entering the cusp of the runaway greenhouse effect nearly half the U.S. population will already be dealing with one antibiotic resistant disease (MRSA, c. diff.) or other, as well as multiple worm infestations of various organs- including the brain. Most power grids will no longer work 24/7 but have to be shut down because of the lack of capacity as millions try to stay cool -  overtaxing the system. Heat waves, rather than lasting a week or so, will now last several weeks, and reach similar temperatures to Death Valley. Water resources will be at risk, and many communities will be without water, also because of power grid collapse. If you can't get electrical power you can't pump water to homes.

Prof. Gunter Weller (formerly of the Univ. of Alaska-Fairbanks Geophysical Institute)  has estimated the runaway greenhouse effect would kick in when the CO2 concentration level of 600 ppm is surpassed-  which seems reasonable. If it is just over 415 ppm now - by many conservative measures. Doing the math (adding 2.5 ppm and 2.5 W/ m2 per year)  puts us in jeopardy even before 2100.

To be sure, the blistering temperatures in the US and Canada this week were caused by an atmospheric high-pressure zone known as a “heat dome”. These conditions arise when the jet stream, a band of fast-moving air high in the atmosphere, develops a large wave pattern, which keeps the dome locked in place.

Scientists are studying whether climate change is contributing to the jet stream’s unusual behavior. Global warming has pushed up the planet’s average temperature, which is about 1.2C warmer now than in 1850

Gunther Weller's predictions (from the mid -1980s) - based on his ice core analyses- are that future warming would be greatest in the Arctic.  This is  a phenomenon known as "Arctic amplification".  In papers and seminars delivered at the GI over 1985-1990 he pointed out that a much warmer Arctic also means a much more unstable polar region with more frequent intrusions ("waves")  of the polar vortex,  leading to frigid temperatures in parts of the U.S. such as we've seen the past few years.  In one seminar he described it "almost like moving the Arctic to the continental U.S."

Unpacking it further: there is generally an immense cold mass of air that sits over the Arctic.  Because  of global warming, climate change the Arctic has experienced diminished sea ice.  As the sea ice mass melts there is less reflection of radiation into space and hence more rapid warming of the darker surface.  This diminishes the sea ice then results in more heat dispatched into the atmosphere. This in turn destabilizes the polar vortex, a low pressure area normally residing over the north pole. This instability then allows polar air to plunge southward into the continental U.S. But it can also warp the jet stream to keep high pressure heat domes locked in place.

Simon Kuper's  Financial Times heads up (June 5, p. C3)   ought to make even the most jaded skeptic take notice:

"A draft of the IPCC’s next report, just leaked to Agence France-Presse, is the panel’s scariest document yet, with increased predictions of droughts, floods and heatwaves by 2050. It also warns about the “tipping points” that could accelerate this future, such as the drying out of the Amazon rainforest or the collapse of ice sheets in Greenland and the Antarctic.

Greenland’s sheet is melting seven times faster than in the 1990s. Today’s climate disasters — such as the record-breaking heatwave in the western US — are portents of worse."

The 'tipping points' to which he refers are actually 'cusps' in catastrophe theory associated with new global minima of the climate system.  As the shape of the system potential V(x,c) changes the original global minimum becomes metastable or even disappears. The potential includes one or more control parameters, c (i.e. change in CO2 concentration)which changes can lead to  a new global minimum or tipping point.  That means transition to a system with different conditions described by the point x Î  R n    that minimizes the potential.  The trouble is the 'new system' is likely to  be one closer to the runaway Greenhouse effect, with much higher 'normal' temperatures such as we beheld in Portland and Lytton, B.C.  The advice of Mr. Kuper at the end of his essay is perhaps most relevant here:

"The younger you are, the more urgent the question. On the most basic level, if you’re buying a house, you’re typically making a 50-year bet: the period of the average mortgage, plus the mortgage of the person who will buy it from you. I wouldn’t buy in Miami today. The rule of thumb is that the safest regions in the future will be the ones that currently have relatively mild or cold climates."

At least 118 people died in the record heat wave that engulfed the Pacific Northwest in late June, when Portland and Seattle hit record highs of 116 degrees and 108, respectively. Lytton, a village in British Columbia, reached 121 degrees. A wildfire destroyed most of its homes, and at least two people died.

Local governments opened cooling centers and asked apartment managers to check on residents who might be at risk. Still, the heat strained the healthcare system in a part of the country unaccustomed to extreme temperatures.

So far, 15 heat-related deaths have been reported in King County, home to Seattle, in addition to 103 across Oregon. Officials in British Columbia believe hundreds of deaths there might be related to the heat but haven’t released an official tally.

Environmental Policy
'Drought' Doesn't Cover It Anymore for the West. This Is Aridification and It's Not Going Away.