In my August 31, 2016 post, I  briefly described the ability to make entanglement measurements at the macro scale.  E.g.

This had to do with measuring connections between pairs of photons within a macroscopic beam of light, and said to qualify as a case of macroscopic entanglement.   Recall here that Albert Einstein was suspicious of any forms of "nonlocality" which he called "spooky action at a distance" - but also known now as entanglement.  Whatever the term it  describes a phenomenon in which measuring the state of one particle instantaneously generates effects on another particle. The entangled particles’ measurable properties then are so strongly correlated that the relationship can’t, statistically, have happened by chance or be explained by classical physics.

While  quantum effects are most easily observed at the micro (atomic) scale, quantum mechanics is not limited to the that scale. In principle, objects of all sizes should behave according to quantum mechanics.   That also implies that macroscopic phenomena and their entanglement can conceivably be measured.   As another  example, holding pairs of ions in traps and exciting them to a state from which they emit oppositely polarized photons causes the ions to end up in two different states. If the two photons are detected simultaneously, measuring the emitted light reveals one ion’s resulting energy state, which must be opposite to that of the other ion. (See Physics Today, November 2007, page 16

Entanglement has also been demonstrated in systems with mechanical degrees of freedom. In 2009 NIST researchers in Boulder, CO demonstrated entanglement in a pair of atomic-scale mechanical oscillators. Pairs of vibrating ions, kicked into motion by a laser beam, behaved like two balls connected by a spring. The pairs vibrated in perfect unison, even when separated in space. That entangled behavior resulted from utilizing the ions’ internal spin states.

Now, in the recent issue of Physics Today  (July, p. 16) yet another form of such entanglement has reportedly been successfully measured.  Two research groups reported direct verification of macroscopic quantum effects that cannot be described by classical physics. In one experiment, Shlomi Kotler, now at the Hebrew University of Jerusalem, and his colleagues at NIST in Boulder, Colorado, deterministically generated and directly measured the correlations needed to verify entanglement between separate macroscale mechanical objects.1 In the other, Laure Mercier de Lépinay and her colleagues at Aalto University in Finland developed a similar system in which they could make quantum measurements that appeared to be at odds with fundamental limits associated with the Heisenberg uncertainty principle.

Both sets of experiments involved pairs of micrometer-scale drumhead membranes that oscillate together in near-perfect synchronization. That scale is large compared with the atomic-scale systems in which quantum effects are usually observed, hence the measurements are deemed macroscopic.

In this notable experimental effort, Kotler, working with John Teufel and other colleagues at NIST, fabricated two oblong 10-µm-long aluminum drumhead membranes that were connected via a resonant cavity, as shown in the figure below: 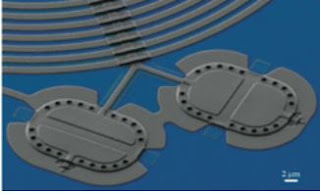 Each membrane is effectively a plate in a vibrating capacitor, coupled to a microwave-frequency AC circuit.  Each membrane basically forms the top plate of a capacitor while the bottom plate is fixed to a sapphire substrate. A spiral inductor links the capacitors to form a microwave cavity. Radiation pressure from microwave pulses that impinge on the cavity then drives the two membrane oscillations to an entangled state.(Once the incident microwave pulses cooled the devices they could be steered into synchronized oscillations.)

The pulses were generated at two different frequencies that inextricably linked the membranes. Had the membranes responded independently to the pulses, one would have heated up and the other would have Doppler -cooled. Instead, one membrane’s interaction with photons generated by the other’s oscillation created entangled motion.
The motion mimicked that of two pendulums swinging with equal amplitude and opposite velocity, E.g. 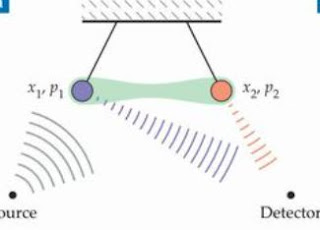 Fig. 2. Mechanical oscillators such as in Fig. 1 mimic the motions of two pendulums
When another microwave pulse is incident on the oscillating membranes, the reflected light is Doppler -shifted and carries information about each membrane oscillator’s position (x1, x2)  and momentum (p1, p2) thereby verifying the entangled state. By amplifying the readout signal immediately on its exit from the device, Kotler and his colleagues ensured that the measured signal could be clearly distinguished from noise.  They had basically shown the feasibility of measuring an entangled macroscopic system using two mechanical oscillators.

Posted by Copernicus at 7:41 AM