"Representative Jim Jordan of Ohio set their (GOP)  tone and pace, apparently betting that a sustained note of incredulity and a motor-mouth delivery could distract listeners from the fragility of his arguments".   NY Times , Nov. 14, 2019,   'Republicans Best Defense Is A Bad Offense'.
"Republican Rep. Jim Jordan is a god-awful human being. His positioning on the House Intelligence Committee during the impeachment hearings is a mystery in as much as he’s dumb and has nothing but enormous skeletons in his own closet. There are the numerous lawsuits and allegations that while an assistant wrestling coach at Ohio State University, Jordan knew about multiple young men being sexually assaulted and molested by Dr. Richard Strauss."  Daily Kos, 'Twitter Has A Field Day With Jim Jordan's Craven Behavior At Impeachment Hearing'. 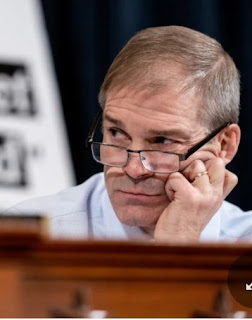 Is it at all conceivable that early reports are true that Reepo Asswit bomb thrower Rep. Jim  Jordan will be on the House Select Committee for the Jan. 6th Insurrection?  If so there is no better way to turn the proceedings into a shit show.  We have already seen from his past performances that Jordan's main talent is disruption and chaos - like his master Dotard.  This as opposed to sober behavior and respect for hearings.

Recall in Trump's first impeachment Republicans kept using their time to return to the specific examples of (invented) corruption involving 2016 and the Bidens, i.e. that Trump has been obsessing over for many, many months.  At the center of this farce was Jim Jordan, as he was also at the center of the hearings  that preceded the impeachment.  One commonality is that at each one of his interrogations grandstanding dominated, along with irrelevance of the questions and a pugnacious style.

Some recent reporting indicates House Minority leader Kevin McCarthy- who was busy yesterday groveling  on bended knee for Dotard- still hasn't made up his mind who  he will seat on the select committee- if anyone.  When asked by one CNN reporter if he decided when he will offer up his appointments he responded, 'No'.   When then asked if he planned to cooperate at all in providing appointments, he replied: "It seems pretty political to me."   Translation:  'The Dems have us over a barrel in terms of which party will have the most guilt heaped on it  for January 6th.'

But in the same CNN report it was noted that Jim Jordan offered himself as willing to be the point guy for the Reeps.  Why volunteer? Because Jordan knows - as does McCarthy- he's the best pick to disrupt committee proceedings and keep it off track.

And when one  thinks about it, well, it makes perfect sense.  Why appoint a serious person to help hang your side when you can appoint a known clown and disruptor - who will keep committee attention diverted with multiple clown acts?  Besides,  Liz Cheney has already agreed to be the serious GOP rep and we know she blasted Jordan on Jan. 6th according to a report from The Hill.

According to that account, Cheney told Jordan that he was responsible for the Capitol riot.  And in a phone call with Gen. Mark Milley, Ms. Cheney really unloaded, saying:   “That f------ guy Jim Jordan. That son of a bitch. ... While these maniacs are going through the place, I’m standing in the aisle and he said, ‘We need to get the ladies away from the aisle. Let me help you.’ I smacked his hand away and told him, ‘Get away from me. You f------ did this!"

This is totally believable given what we already know of Jordan, especially his coziness with another sewer rat, Trump.   As The Hill notes, the origin of the exchange appeared in the new book I Alone Can Fix It,   by WaPo reporters Carol Leonnig and Philip Rucker.   Given how Jordan has already pissed off Cheney putting him on the Select committee would be kind of a 1-2 gut punch to both her and Nancy Pelosi.  But there is just as much chance that McCarthy will punk out and pick no one.

We will see!  The only move worse than putting Jim Jordan on the Select  Committee would be putting Lauren Boebert or Marjorie Taylor Greene on it   But at this stage I wouldn't put anything past Trump supplicant Kevin McCarthy.    One last point:  If McCarthy does appoint Jordan - and any other pro-insurrectionists - Nancy Pelosi has final say over allowing them.  That is the great aspect of having veto power for  a select committee. Let us just hope Ms. Pelosi is prepared to use it.

Posted by Copernicus at 7:42 AM