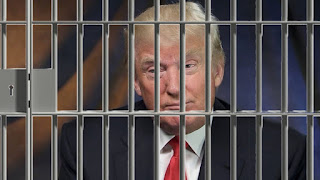 "Ya finally got me!  But  maybe Putin can get me out!"

The news yesterday that the Justice Department notified the Treasury Department to turn over Traitor Trump’s tax returns to the House panel ,  is a welcome sign to end the Dotard stonewalling. According to a memo released on Friday, the House panel that has sought them since 2019 had invoked sufficient reasons for the request.

With the memo by the Justice Department’s Office of Legal Counsel, the end is now in sight to perhaps get Trump behind bars once and for all. We will see.

As we know, Trump broke with four decades of tradition from previous presidents and major-party presidential candidates by not voluntarily releasing any tax returns.  Instead he has speciously argued that Democrats seeking them were engaged in a "political fishing expedition" to make him look bad.   Of course this is rabid nonsense, on a par with his calling Robert Mueller's investigation of his Russian conspiracy ties a "witch hunt" and "hoax".

According to  the Justice Department’s Office of Legal Counsel  39-page memo made public Friday:

“Although it is possible that some members of Congress might hope that former President Trump’s tax returns are published solely in order to embarrass him or to ‘expose for the sake of exposure,’ such individuals’ motives would not serve to invalidate the Committee’s request,”

Friday’s opinion says the earlier legal memo didn’t give enough deference to the House committee, and that the tax panel in particular has special access to tax information given its role in overseeing the national tax system.

The judge overseeing the House panel’s efforts to obtain the documents from the Treasury Department had previously ordered the government to provide Trump’s lawyers 72 hours’ notice before releasing any returns. Dotard’s lawyers had requested that delay to give them the possibility of challenging the government’s position.  But really, what can a grifter tax cheat criminal possibly challenge?  It's laughable.

What is spot on accurate is what House Speaker Nancy Pelosi said regarding  the Justice Department’s notice which “delivered a victory for the rule of law.”  Adding:

"The American people deserve to know the facts of [Mr. Trump’s] troubling conflicts of interest and undermining of our security and democracy as president"

"One of the pretty foundational understandings is that your tax returns are going to be private and not going to be, you know, shared widely.  So I hate for them to now be turned over to Congress and invariably will leak to the public."

Sorry, pallie, but a presidential candidate (and president)  who is also a criminal and traitor has no such privacy protections. For all we know he manipulated his taxes to gain assistance from the Russkies (paying them off)  in 2016 to seize control of the nation, setting it on an autocratic, Putin-like course.

"A review of the public record reveals a clear and disturbing pattern: Trump owes much of his business success, and by extension his presidency, to a flow of highly suspicious money from Russia. Over the past three decades, at least 13 people with known or alleged links to Russian mobsters or oligarchs have owned, lived in, or even run criminal activities out of Trump Tower and other Trump properties. Many used his apartments and casinos to launder untold millions in dirty money .....Taken together, the flow of money from Russia provided Trump with a crucial infusion of financing that helped rescue his empire from ruin, burnish his image, and launch his career in television and politics....It's entirely possible that Trump was never more than a convenient patsy for Russian oligarchs and mobsters."
This tax record info should now also be grist for the mill of the House Select Committee to see what conniving Republican traitors Trump may also have paid off to help him in the insurrection and sedition.  The over long reign of this sore loser, insurrectionist traitor and his grip on half the nation may finally be nearing its end.
Posted by Copernicus at 6:21 AM