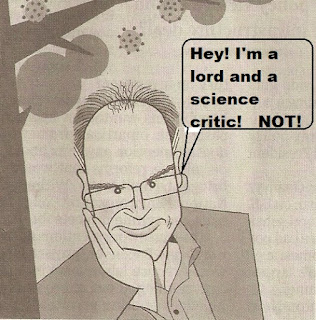 It seems every manjack wants to be a "science critic" these days.  You have bozos like the WSJ's Holman Jenkins Jr. weighing in on everything from Covid to climate change,  getting nearly everything wrong while making wild generalizations about science.  Then who could forget comic Jon Stewart's recent televised rant, e.g.

Where he confirmed the need to keep a day job as comic, rather than venture into science critiques. At one point host Stephen Colbert was so taken aback by the outburst he had to ask his friend:

“And how long have you worked for Sen. Ron Johnson?”

Referring to one of the top Repuke nitwits spreading  Covid vaccine  conspiracy garbage. But these incidents and examples overlook hundreds more where every Tom, Dick and Liz seeks to expound on some facet of science.  So when I spotted the generalizing WSJ header  ('How Science Lost The Public's Trust', p.A11, July 24-25) I immediately wondered about the identity of the latest smug turkey.  It turned out to be Brit science writer Matt Ridley who also happens to write every now and then for the WSJ.  In a page -long interview with the WSJ's Tunku Varadarajan he tried to show how science had "lost its way" with the public on everything from Covid to climate change.   After reading his answers it struck me he'd be better off sticking to his "day job"  as a member of Britain's House of Lords. (As  the "Fifth Viscount Ridley")

Given there's way too much codswallop to critique individually I will just focus here on the biggest howlers, as when Ridley asks:

"If you think biological complexity can come about through unplanned emergence and not need an intelligent designer, then why would you think human society needs an intelligent government?"

Proving that even an intelligent science writer can propose stupid false analogies, that mix 'chalk' and 'cheese'.  As Janice remarked when I showed her the sentence: 'He's an idiot!  What does one thing have to do with the other?  He's mixing a powerful scientific hypothesis with a political - governmental truism."

Janice is referring in the first instance to abiogenesis, i.e.

At its heart is the suspect dogma of "irreducible complexity" which is really more a cop out argument, or non-argument, i.e. from ignorance.   So because a structure, e.g. ear, appears vastly too complex from the inferior vantage point of the untutored human percipient it must be "designed".  By invoking this it's automatically assumed no scientific appeal can be made. But by invoking intelligent design its proponents are hoist on their own dubious petards.  Because then they are forced to account for all the designer 'screw ups' which are easily accounted for by evolution. These include the rupture-prone vermiform appendix, and the 'tail bone' or coccyx (a residual from our ape ancestors),  as well as certain vision impediments.  The evolutionary process of 'trial and error' can account for all of these, so no 'designer' or design is needed and in fact such inclusion creates more questions than answers.

Not content to stop with this insane nonsense, "Lord" Ridley next takes epidemiologists to task,  i.e.

"The pandemic has, for the first time, seriously politicized epidemiology. ...It's the fault of epidemiologists themselves deliberately publishing things that fit in with their political prejudices or ignoring things that don't."

Which is total, irredeemable balderdash.  In fact, if indeed epidemiologists were guilty of what Ridley claims there isn't a snowball's chance in hell they'd be published in a reputable journal.  The reason is that, like solar physics and plasma physics,  these journal contributors must go through the most rigorous peer review.  A paper will simply not see the light of day if it merely echoes or informs a preconceived political position. As for lockdowns, which Ridley believes were based on "alarmist modeling" - that simply proves him to place his faith in quacks like so many others who've complained they were too extreme. Failing to note that without rigorous, widespread testing and/or vaccinations- they are the only thing that works.

This is the other ding on Ridley:  He yaps throughout the interview of the "politicization" of science, but fails to pin the tail on the culprits: the reactionary media Right.  As Dr.Ashish Jha  - Dean of Medicine at Brown University - observed this a.m. it has largely been the politicization that has dunned vaccinations, including the accompanying misinformation.

Ridley's dumbest remark is reserved for adult vaccine hesitancy.    Here he claims that  "It is the lesser of two risks for adults to spurn vaccines."  Ignoring the current numbers and data, i.e. amongst unvaccinated adults the infection rate has now surged by 314%   and deaths by 46%.   If one ignores  such data I argue he's more science quack than critic.

This risible quackiness carries over to climate science, where Ridley seems to believe "forecasts of a scary future are more likely to get you attention".   In other words, climate scientists like Gunter Weller, simply put out the results of their papers to gain attention and scare people.  Maybe Ridley has been spending too much time ignoring today's climate events - from the rampaging fires in the West and Siberia, to the mega droughts and heat waves, not to mention once in a thousand year flooding in Germany and China.  "Scary?"  If you're not scared, as Maureen Dowd wrote in her recent column, then you're comatose.

As John Holdren, a professor of environmental policy at Harvard’s Kennedy School of Government, contended in a recent essay:

“Everything we worried about is happening, and it’s all happening at the high end of projections, even faster than the previous most pessimistic estimates,”

Ridley then shows how behind the research times he is when he babbles:  "Twenty or thirty years ago you could study how the ice ages happened  and discuss competing theories without getting all political about it."

Those days are gone because the current CO2 concentration is averaging around 415 ppm and has hit 417 ppm.  We also know ('Greenhouse  - The 200 Year Old Story Of Global Warming' by Prof. Gale Christianson)  that there have never been ice ages when the CO2 concentration exceeds 200 ppm.  Give that it is now more than double and still increasing, it makes sense Ridley "hears no more about ice ages".  As for "competing theories" - apart from the ice ages arising from the Milankovitch effect - which has already been discredited, e.g.

There aren't any.  Certainly no solar "cooling" theories are viable any longer, or attributing global warming to the Sun.  The evidence simply isn't there.  See e.g.

Brane Space: What's Up with the Sun? (brane-space.blogspot.com)

As for Ridley's "nuanced" views on climate change,  these can best be compared to those of the climate obscurantist Roger Pielke Jr.  e.g.

In that like Pielke Jr. Ridley doesn't believe there is any need "for radical changes in human behavior and consumption".   That's fine, of course but it just means he's yet another climate quack.   We already have more than enough of these misfits and given how the pace of warming is ramping up, their inputs are not what is needed right now.

By far Ridley's most egregious take was in mangling a quote from physicist Richard Feynman, particularly in not providing a proper context.  Thus we read (ibid.):  "Conformity is the enemy of scientific progress, which depends on disagreement and challenge.  Science is the belief in the ignorance of experts as Richard Feyman put it."

Hold on there, pard!  Feynman did not put it in that way and context is key here.  Feynman's full quote - no truncation - is as follows:

"Science alone of all the subjects contains within itself the lesson of the danger of belief in the infallibility of the greatest teachers in the preceding generation (…) When someone says, “Science teaches such and such,” he is using the word incorrectly. Science doesn’t teach anything; experience teaches it.

If they say to you, “Science has shown such and such,” you might ask, “How does science show it? How did the scientists find out? How? What? Where?” It should not be “science has shown” but “this experiment, this effect, has shown.” And you have as much right as anyone else, upon hearing about the experiments–but be patient and listen to all the evidence–to judge whether a sensible conclusion has been arrived at. (…)

The experts who are leading you may be wrong. (…) I think we live in an unscientific age in which almost all the buffeting of communications and television-words, books, and so on-are unscientific. As a result, there is a considerable amount of intellectual tyranny in the name of science. (…) Science alone of all the subjects contains within itself the lesson of the danger of belief in the infallibility of the greatest teachers of the preceding generation."

What Feynman is getting at, and Ridley glosses over, is that  the mere recitation of pre-existing knowledge - i.e. via lecture notes-  is often called “science”.   But it is nothing of the sort because the experience and testing isn't there.  If I teach a physics class about radioactivity but don't let them actually experiment- say measuring the half life of a material, then it is a vacuous exercise.

In such a context, anything can be a "science": political science, social science, religious science, and so forth. But whether the knowledge is true or false,  may have little to do with genuine science.  It is simply the transmission of prior knowledge from "on high" or some other professor or authority as it were.

If someone tells you that there are 24 pairs of ape chromosomes, you have a duty to ask “How do they know?”, “How would I find out?” Same if they tell you there is an aurora 'belt' over the Earth's polar region. Science begins when you ask yourself how we can verify what is in the text book, or what an authority or expert says.

How should you teach science?   How would I teach physics, really teach it? If I tell my students that the electron in a hydrogen atom makes certain transitions which causes formation of spectral lines, I am obligated to show them, to demonstrate it in the lab. My students are obligated to treat everything skeptically and ask why this or that instrument (e.g. spectroscope), was used and how it works.

Oftentimes people are given advice and told that "it comes from the science”, as if it settles anything. That is often no different that being told that the knowledge comes from “the high priest himself”. It is certainly a power play, but it is not science. When someone tells you that science is saying XYZ, you should always ask “How do people know that XYZ is true?” As an answer, you cannot just be repeating their arguments: you must think for yourself.

The point which Ridley misses is that there is a difference between listening to the experts (something Feynman advocated) and deferring to the experts.   To take Ridley's WSJ quote seriously we should not even listen to epidemiologists or climate scientists - especially if they hypothesize theories we may not like - say the natural origin of Covid theory over the lab leak hypothesis.

Which could only be the case if science as philosophy is really a non-rigorous, 'anything goes' system wherein any deviant theory or even falsehood can find acceptance.  And Ridley's version of Feynman's original quote is taken to supersede the whole quote in context.  So that any goofball or nobody can challenge - without evidence of his or her own - anything an expert has published or says in public referencing that material.

Which, based on the reading of  this WSJ interview, is something Lord Ridley would love.

Posted by Copernicus at 5:09 AM