Holman Jenkins Jr. from his previous WSJ op-ed efforts (on Trump, the Jan. 6th Committee, Covid, Climate etc.) is known to be an unapologetic disinformationist who traffics in blarney and baloney - hoping his gullible readers will keep biting. His latest effort (p. A15, Putin and the UFO Puzzle) is no different - only this time veering into the area of UFOs, UAP.  To be fair, he does get one thing correct when he writes:

Citing the clumsy and error-saturated invasion of Ukraine which I also referenced in an earlier (May) post i.e. skewering Marco Rubio's Russian origin of UAP myth.  Given it fails to factor in:  "a country that lacks even the basic military know -how to protect its advancing supply convoys in an opening attack on Kyiv."

But in the next line he boffs it with this codswallop:

"The most credible alleged sightings have been by U.S. military pilots in training missions in airspace reserved for U.S. military training operations. If the objects are real and the product of any government, they’re likely ours.

But such technology would be destabilizingly risky and likely would not be revealed by any power that had it. If the mysterious sightings are what they seem—impossibly speedy, impossibly maneuverable small flying objects—they would immediately upset the nuclear balance. The presumably unmanned systems could be used to destroy nuclear forces quickly and thoroughly on the ground, without resorting to nuclear weapons."

Let's get one thing clear here:  The U.S is not advanced to the point of having such craft either, not in 100,000 or in 1 million years - assuming the country were to survive so long. So little Holman Jr is dreaming up twaddle like he often does.  Except for the fact such craft with ancillary weapons might also be used to destroy nuclear forces.  But the U.S. having such?  Not on your life.  Look, the U.S. military can't even produce a B-2 Stealth bomber that doesn't lose evasion capability in the rain for god's sake.  Rain - according to one report - distorts the 'skin' of thermoplastics and composites- causing the plane to lose much of its ability to evade enemy radar.

Beyond that, we haven't even reached the stage of developing sustainable fusion energy and you're going to try and tell me we have the technological wherewithal to devise and construct aerial craft that can change direction at hypersonic velocities? Please. Makes me wonder if Holman has found a new MJ candy to go with his shrooms.

"In a previous column, I suggested why, for space-time reasons, they are unlikely to be alien spacecraft. An alternate view can be found in a new book by ex-banker Mark Gober, who rests his case mainly on the credibility of numerous credentialed people who believe or suspect they’ve seen evidence of alien encounters."

Again, his thinking is too pedestrian and points to a failure of imagination as well as abstract reasoning using more advanced physics. I suspect, as I've written earlier, that no amount of "more rigorous analysis" will reveal the UAP nature or underlying breakthrough technologies because it takes a more advanced technology to adequately analyze a given breakthrough  technology - as demonstrated by the UAP.

Think of a Neanderthal trying to make sense of an F -117 Nighthawk aircraft.

And you get the idea.   From the Neandertal's rock- club- knife level of technology the Nighthawk screeching overhead would likely give him a heart seizure.   There is simply no way his crude 'technology' would allow him to comprehend - even in the most rudimentary way- the technology behind the Nighthawk.  The same analogy applies to us "modern humans" trying to make sense of the craft embodying UAP technology.   Or in the words of another official behind the original report:  "Some of those could require scientific advances on our part to allow us to better understand what it is that we’re observing,”

Still, one can form some hypotheses of what would be needed and especially to knock down Jenkins Jr's (and other skeptics) "space-time reasons" for why the UAP cannot be of alien origin.   Quantum physicist David Bohm has already - from a quantum perspective (Wholeness and the Implicate Order, pp. 233- 242) written about the energy called 'zero point' , i.e.

If one considers the electromagnetic field in empty space, for example, one finds from the quantum theory that each such ‘wave-particle’ mode of excitation of the field has what is called a ‘zero-point’ energy, below which it cannot go, even when its energy falls to the minimum that is possible. If one were to add up the energies of all the ‘wave-particle’ modes of excitation in any region of space, the result would be infinite, because an infinite number of wavelengths is present....

If one computes the amount of energy that would be in one cubic centimetre of space, with this shortest possible wavelength, it turns out to be very far beyond the total energy of all the matter in the known universe.

According to the quantum theory, a crystal at absolute zero allows electrons to pass through it without scattering. They go through as if the space were empty. If the temperature is raised, inhomogeneities appear, and these scatter electrons. If one were to use such electrons to observe the crystal (i.e. by focusing them with an electron lens to make an image) what would be visible would be just the inhomogeneities. It would then appear that the inhomogeneities exist independently and that the main body of the crystal was sheer nothingness

The key here is that transitions in the order of the space and its dimensions (implicate-> explicate-> implicate etc.) enable a kind of alteration of physical forms that isn't easily grasped by reductionist systems of physical reality.  This was more fully explicated ten pages earlier in reference to his model for electron behavior in the plenum, i.e.

What is essential to this new model is that the electron is instead to be understood through a total set of enfolded ensembles, which are generally not localized in space. At any given moment one of these may be unfolded and therefore localized, but in the next moment, this one enfolds to be replaced by the one that follows. The notion of continuity of existence is approximated by that of very rapid recurrence of similar forms, changing in a simple and regular way (rather as a rapidly spinning bicycle wheel gives the impression of a solid disc, rather than of a sequence of rotating spokes).

This also needs more explication in terms of the zero point energy and physicist Jack Sarfatti delivered the goods in a 2001 paper on the 'World Crystal' to do with 'Star gate' type of transitions using zero point energy.  In terms of Sarfatti's explanation from his paper ('The World Crystal Lattice Quantum Vacuum):

The geodesic world line is the straightest path possible in a spacetime that may be warped with real curvature and torsion in an imperfect world crystal lattice. The local inertial frame (LIF) metric is that of equation (1) : 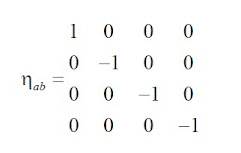 This is the passive view. There is also an active view in which local gravity forces are caused by the local acceleration of the Local Non-Inertial Frame (LNIF)  with curvilinear coordinates:  x m

The general curvilinear transformation from LIF to LNIF:

However, we need to formulate this in a coordinate independent way. Use the null energy condition (NEC). For any null 4-vector k m i.e.

Is the condition for the exotic quantum vacuum needed to manufacture Star Gate Time Machines connecting the parallel universes of the Super Cosmos.

(1.22)
From (1.22) we see we can do this in principle because L p is a common factor in every term of (1.27) and (ΛΨΨ controls its sign. This is the exotic region of anti-gravity. It also seems to fit the data on the acceleration of the expansion of the universe. )

Again, we are not delving into the detailed 'mechanics' here, i.e. of how UAP might do their things, only examining the potential energy stores and related conjectures that would enable them,  say - to suddenly appear in a different place - as if they hadn't moved through the intervening space. (As reported by military pilots).  The mind -blowing explanation is every bit as gob smacking to most present day humans - even physicists - as an aeronautical engineer's of the F-117  would be to the Neandertal, assuming minimal language barriers.

That is, these alien (UAP) craft employ a technology (for lack of a better language term)  enabling them to transition between two parallel universes via a higher dimensionality. (Bohm posits 5 dimensions, for his implicate order).   Distinct parallel universes, recall, may also feature different physical constants from ours (e.g. G, c, h,  a etc.) which may expedite UAP point- to- point transitions.

One possible “vehicle”  might be a D-brane craft which would generate non-local effects to enable it to instantly connect to a distant region of space. Branes are surface representations of strings, and include p-, and D0, D1, .. D5-branes. The latter comprise a five dimensional hyper-surface which propagates at the scale of Planck length  L p   thereby sweeping out a six dimensional space-time.

How to apply to a UAP-UFO device? I suggest here that a curved surface, e.g. of  networked D2- branes,  is manipulated so that its physical parameters comport to those of a distant region of space.  One such example composed of D2 branes is shown below, 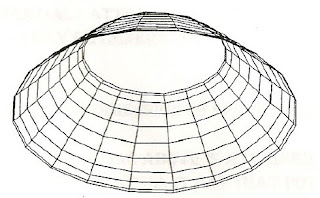 Each D2-brane panel has the capability of extracting zero point energy via  instantonic D(–1)-branes to access a higher dimensional D5 brane.  This latter would comport with David Bohm’s hypothesis that the implicate order (which can enfold parallel universes including our own) can be accessed to enable transition to another coordinate in 4D space time.

The principle at work is so profoundly radical that it requires further explication. We are not talking so much of a “propulsion” system as a resonance mechanism capable of instantaneously connecting distant regions. Thus, the ‘craft’ depicted uses no “fuel” as such but rather a collection of  malleable branes that alter their local (electrical, magnetic, gravimetric etc.) properties to adjust existing brane space X(B) to some distant brane-space, X(B').  E.g.

When a suitable adjustment is made between two branes (i.e. one for UAP, the other for a distant target) an instantaneous linkage is forged as a brane-hole expands and detaches in the distant space – emerging as the UAP.  E.g. 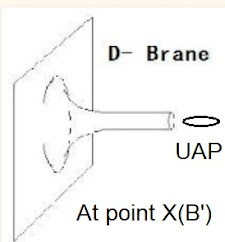 
The UAP, in effect,  have somehow been able to master the use of quantal scale vacuum or zero point energy to achieve these transitions, likely via brane manipulation. The exact detailed 'how' may take us another 100,000 years to figure out.   Let's learn to 'crawl' before we try to run with the aliens. Let's get workable fusion reactors first, or even B-2 Stealth bombers that don't lose radar cloaking ability in the rain.

And:
Physics Today Book Reviewer Kate Dorsch Is As Clueless About UFOs As Neil DeGrasse Tyson
And:
https://youtu.be/Ce6ZevfbIK0
Posted by Copernicus at 6:36 AM