Newsflash: There Are No "Pregnant People" Only "Pregnant Women" - Time To Cease Dumbo Language Use 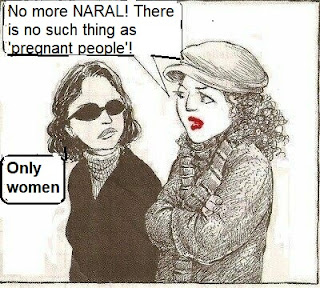 "The noble intent behind omitting the word “women” is to make room for the relatively tiny number of transgender men and people identifying as nonbinary who retain aspects of female biological function and can conceive, give birth or breastfeed. But despite a spirit of inclusion, the result has been to shove women to the side."- Pamela Paul,  NY Times piece ('The Far Right and Far Left Agree on One Thing: Women Don’t Count')

When I first heard Bill Maher refer to the cockeyed term "pregnant people" in dissing the Left, I couldn't believe it.  See e.g. 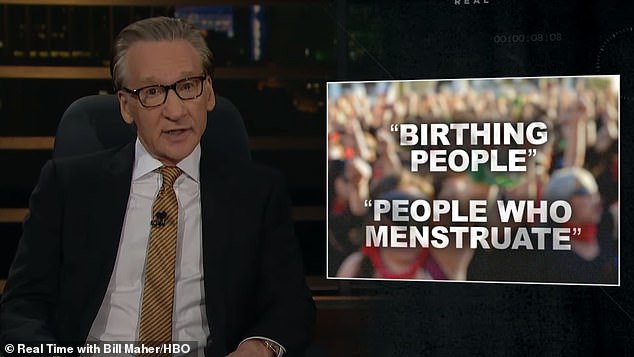 He was arguing (again) how the Left and Dems blow themselves up by absurd use of language driven by the yen of uber political correctness.  Thereby rendering its own positions - say defending abortion rights - such that they alienate women voters who should be allies.  In his words:

'For decades, liberals have said, 'If only men could get pregnant, this wouldn't even be an issue,' and 'abortion rights are Women's rights. Well, that's wrong now.

"When the wokey end of the progressive spectrum talks about abortion now, they shy away from the word 'women' and prefer terms like 'birthing people' or 'people who menstruate' because somewhere there's a trans man who's pregnant and I say good for him - and I'll be looking for his story somewhere in a future issue of Ripley's Believe it or Not."

Maher's error was in casting too wide a net ("the Left") when in fact it is only a minority, hyper-PC conscious enclave of groups and pols.  But why shy away from the word 'women' when women  - real ones - are those most affected by having reproductive rights taken away, being made to endure forced pregnancy etc. and especially undergoing the horrors of incest, rape? (See first link at bottom)  Thus, any "woke" left enclave attempting to diminish these liabilities, e.g., for one biologically bona fide pregnant gender - by elevating a rarefied odd segment to equal importance - is engaged in nothing short of self-defeating lunacy.

Especially in the approaching mid -terms when  all our rights will be on the ballot and we need actual women to know we're standing with them and need their votes.  The latter only realized if we cease to conflate the actual gender affected with a quasi group remade using artificial hormonal, surgical interventions.

Yet as Pamela Paul wrote in her Sunday NY Times piece ('The Far Right and Far Left Agree on One Thing: Women Don’t Count') today,

'A number of academics, uber-progressives, transgender activists, civil liberties organizations and medical organizations are working toward an opposite end: to deny women their humanity, reducing them to a mix of body parts and gender stereotypes."

"As reported by my colleague Michael Powell, even the word “women” has become verboten. Previously a commonly understood term for half the world’s population, the word had a specific meaning tied to genetics, biology, history, politics and culture. No longer. In its place are unwieldy terms like “pregnant people,” “menstruators” and “bodies with vaginas.”

This, of course, is batshit nuts.  Why the hell would any group - especially on the Left-   confuse the issue by trashing the language and obfuscating matters with such bare bollocks.  I am not sure I'd go as far as Ms. Paul in claiming such over-extended use "denies women their humanity"  but the conflation of a minuscule, odd set of trans men to become quasi 'women' by virtue of hormonal tricks,  does undermine genuine female identity.  We elevate an absurdly tiny minority with gender dysphoria - who resort to draconian means to achieve an external pseudo biological change-   to the same level as a biological female.

This is foolish as well as unwarranted, especially at this critical time when the bodily autonomy of real women is under siege.  And all our rights will be up for grabs by the relentless Right in the fall, who seek to ban abortion nationally for all real women.

Yet we are now to understand from Pamela Paul that 'Planned Parenthood, once a stalwart defender of women’s rights, omits the word “women” from its home page. NARAL Pro-Choice America has used “birthing people” in lieu of “women.”  Well, if that's the case, I've made my last donations to either group.

They have gone off the rails, lost their reason for the sake of a passing political correctness and are now liabilities to real women's rights.  That means the original gender at birth, of a female, not a male who later transitioned using hormones, surgery or both.  And no, there is no way in hell such a transitioned male can have an abortion in any strict sense of the term.  Thus, the incorporation of the term by these activist groups amounts to a major unforced error as we head toward the midterms.  Because it will lower critical turnout to stop the Reeps from taking power and passing a national abortion ban affecting all real women of child bearing age.  And contrary to one negative NY Times commenter, accepting a tiny fringe minority of MEN does impact adversely actual women who stand to lose the most by virtue of their sheer numbers.

"Can you blame the sisterhood for feeling a little nervous? For wincing at the presumption of acquiescence? For worrying about the broader implications? For wondering what kind of message we are sending to young girls about feeling good in their bodies, pride in their sex and the prospects of womanhood? For essentially ceding to another backlash?"

Are ones with which both Janice and I agree.  The cost of slapdash semantic sophistry is simply not needed or wanted at this time.  12 million real  suburban women showing up to vote Dem in the fall could turn the tide of the autocrat Reepos and their plans to torch our democracy.  Fewer than 100 "trans men" who managed to somehow get to call themselves "pregnant" using hormones and implantations, cannot. The numbers clearly side with the actual female gender.

It is time Left activist groups and especially pro -choice groups begin to recognize that and cease contaminating the language with PC reconstructions on steroids. Those do not redound to our benefit.  There is genuine "inclusive" language and then there is surrendering to irrational bunkum and uber political correctness.  The yen to equate "pregnant trans men" to biologically- born women is exactly that and we do a disservice if we fail to call it out. The technological ability to pseudo-convert a person to a "pregnant human"  does not make that conversion an abiding reality, or the pregnancy risk (via rape, incest) as real as that for an actual female.

Let's also be clear here that no one wants to deny trans folks their rights, i.e. to transition and even trans males to get to the outlier "pregnancy" realm. If this is what "floats" their boat, fine, go for it.  But don't destroy language and logic to try to give a "right" to a minuscule minority that isn't truly biologically based.  Let's not confuse a PC-driven sense of "inclusion"  with the threats real gendered females face today from an extremist court in trying to render them second class citizens or worse. In that regard, the NY Times commenter (2nd quote at top) is correct in asserting: "it should be agreed that when discussing reproductive rights we need to use the term pregnant women not pregnant people,-

The other issue with Paul's piece is there is a degree of false equivalence in comparing the Right's seeking to strip away women's rights over decades with a tiny minority on the Left using over- generalized, conflating language. Let's not lose sight of the Right's agenda, but at the same time let's not provide them with more fuel to inflate it via sloppy semantics.  'Nuff said! 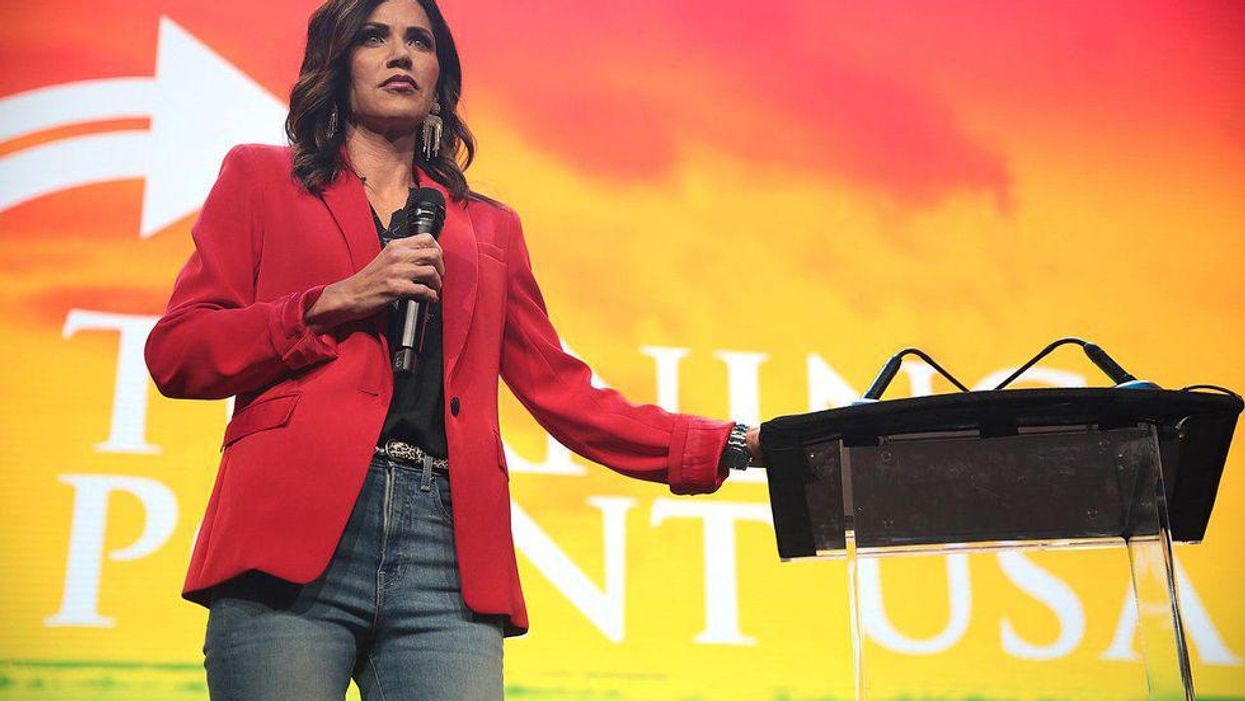 South Dakota Republican Governor Kristi Noem hinted to CNN's Dana Bash on Saturday that her state would force pre-teen rape victims to carry the resulting pregnancies to term. Noem's remarks come days after a 10-year-old Ohio girl was denied an abortion because she was three days past the six-week restriction and had to travel to Indiana to access the procedure.

It’s the cruelty that will undo the forced birth crusade

In Louisiana, a dark turn in the post-Roe wars signals danger ahead

Barely moments after the Supreme Court struck down Roe v. Wade, jubilant activists excitedly turned to the next step: criminalizing abortion to the maximal extent possible. This includes blocking women from seeking abortions across state lines, and even empowering citizens to punish people who help those women by hitting them with vigilante lawsuits.

Women, always there for America, are taking a knee this July Fourth

Posted by Copernicus at 9:11 AM