Is There A 'Quantum Measurement Problem'? No - Provided One Adopts A Statistical Perspective

Misconceptions  concerning the “quantum measurement problem,”  have been around for decades, as when one read, e.g. in Richard Schlegel's monograph Superposition and Interaction:Coherence in Physics (1980, University of Chicago Press, p. 178,) about  the opinion expressed once by Prof. Eugene Wigner (at a QM conference).

"the consciousness of a dog would effect the projection of a quantum system into a single state whereas that of an amoeba would not."

So based on Prof. Wigner's take,  if a dog (like a French Poodle, say)  could "effect the projection into a single state" why not a human who observes Stephen Curry closely enough in an NBA game to make his jump shot bounce off the hoop at the last moment?  Game to Celtics! Again, the reason is that basketballs are macro- sized objects, as opposed to electrons, protons, etc.  But leave aside macro-size objects, can a quantum physicist observing an atomic scale system actually cause an electron to change its state and jump to another orbital?  Therein lies the crux of what we refer to as the quantum measurement problem: the quantum system observer bringing about the 'collapse' of a superposition of distinct quantum states into a new, single state.

“An irremovable problem element enters into quantum theory with the observation of the system given the prediction that it will be in some state  y can only be made with the probability measure  [an ] 2  where:  an =    (yo,  y )

and the defined superposition of states is given by

“something happens which is not within the purview of the exact equation for the wave function which can do no more than give a probability estimate for the likelihood of finding the system in a particular state. “

“If we wish to observe the position and momentum of the electron at a quantum level of accuracy we must regard the electron – plus the light quanta used in making the observation – as part of an indivisible, combined system.”

In this case the thought experiment making use of a "Heisenberg microscope" is useful to fix ideas. 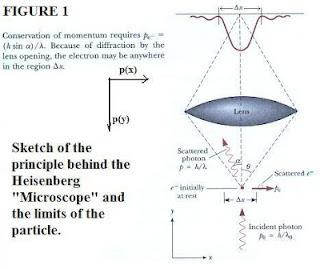 Where  l is the wavelength of the scattered light and q is the half-angle subtended by the objective lens of the microscope.  Then the uncertainty in electron position is:

In order to be collected by the lens, the photon must be scattered through any range of angles from - q to q. In effect, the electron’s momentum values range from:

Then the uncertainty in the momentum p x  is given by:

The Heisenberg Uncertainty Principle product is:

In terms of how far the interaction between observer and the system observed can be pushed he writes (ibid.):

“The question is completely irrelevant as far as the theory of measurements is concerned  since it is only necessary to carry the analysis to some classically describable stage of the apparatus.”   In other words there is no 'quantum measurement problem' in terms of an observer causing sudden “collapses” of the observed electron – say – which renders its properties inaccessible."

Can both these interpretations be correct? Yes, it turns out, once one argues within the same set of facts and observations based on the statistics.  As N. David Mermin explains (Physics Today, June, p. 62, 'There Is No Quantum Measurement Problem'):
"Quantum mechanics describes a physical system entirely in terms of states.  A state is a compendium of probabilities of all possible answers to all possible questions one can ask of the system.  Thus quantum mechanics is inherently statistical.  There is no deeper underlying theory that gives a fuller description.
The state assigned to a system can change in two ways: 1) If no question is asked of the system then its state evolves in time deterministically, continuously and according to fixe rules.  Or (2): If a question is asked of the system - called 'making a measurement' - then when the question is answered the state changes discontinuously into a state that depends both on the state just before the question was asked and on the particular answer the system givces to the question. The second process is called collapse of the state.  Such collapse is generally abrupt, discontinuous and stochastic."

Paul Dirac, in his book Quantum Mechanics, basically agreed with this in terms of defining the “principle of superposition”:

Mermin goes on to elaborate further in his essay,

Well, the answer as he notes depends on the physicists making said measurements.   In Mermin's words:  "What one chooses to regard as the physical system and what state one chooses to assign to it depend on the judgment of the particular physicist who questions the system and who uses quantum mechanics to calculate the probabilities of the answers."

One thing we can say then is that a dog - French poodle or other- will never be a quantum physicist so that we need not worry it will effect the projection of a wave function (superposition of states) into a single state.  Nor will I - merely on observation of a Brewer hitter (e.g. Christian Yelich) during  a live ball game -   ensure he clobbers a homer at every at bat.  There will only be genuine "measurement problems" when we interject metaphysics.

And:
Heisenberg Uncertainty Principle Demonstrated At Macroscopic Scales
Posted by Copernicus at 6:24 AM