Is There A Climate Emergency? All The Indicators Point To A Serious Crisis Nearing Emergency 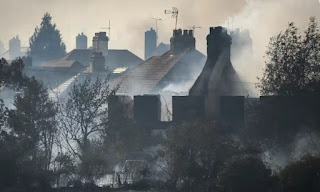 A sobering fact (1):  The amount of planet warming carbon dioxide (CO2)  in the atmosphere is now greater than at any time in the past 4 million years. Fact (2): The United States is the world’s second-biggest annual emitter of greenhouse gases, after China,  and is responsible for a greater portion of historical emissions than any other nation.

Less well known, but predicted (in 1987)  by then Geophysical Institute Prof. Gunther Weller,

is that rapid Arctic melting and increased warming could precipitate a climate emergency in the 21st century.  By late 1986  Prof. Gunther Weller had shown the abnormal heating of the Arctic - some 5 - 7F greater than the continental U.S. The ice cores available at Dr. Weller's  Atmospheric Physics lab were extracted from Arctic ice at depths corresponding with geological time frames dating back over 80,000 years. His results showed that the greatest ambient temperatures corresponded to the highest CO2 concentrations recorded in the ice cores. Also the largest increases in ambient temperatures have occurred over the past 50-60 years, during which the CO2 increases have been largest (now approaching 400 ppm). Since then this relationship has only been further corroborated

Prof. Weller's forecast of "climate emergency" then hinged mainly on massive damaging effects of a rapidly warming world on infrastructure- such as melting tarmac at airports, rail way degradation from temperatures 40 C or more, collapse of power grids, and impacts on human health where "thousands can die at a time in heat waves."  He may even then have had an inkling of the 15,000 that would perish in a French heat wave in 2003.  Along with his ice core data, Prof. Weller likely saw two other factors that contributed to such forecasts:

Whether President Biden can issue a climate emergency order is another matter.  As noted in the main editorial in today's WSJ  ( The Beast Mode Presidency, p. A12 )

Congress passed the National Emergencies Act of 1976 to limit abuses of executive power. The law requires the President to activate his powers under one of 130 or so statutes that authorize emergency actions.

While this is so, there may be extenuating circumstances to do an end run around it, namely that climate scientists can show that the climate situation in 1976 was not the critical one we're at today.  I.e. with approach to a global tipping point leading into a runaway greenhouse nightmare world.  The WSJ editora are also disingenuous when they babble (ibid.):

Climate change is neither sudden nor unexpected. The world has warmed by 1.1 degree Celsius since the late 19th century, and the pace of future warming is uncertain and depends on multiple variables.

Given while climate change is not unexpected, the degree of change -  UK meteorologists had predicted a day like yesterday  (40.2 C) in London for 2050, July 19-  has absolutely not been anticipated.   Also the trope that the world "has warmed by 1.1. C since the 19th century) is now old, lame news.  The actual degree of warming is more like 3 C (or 5.4F).  This comports with the 2021 IPCC report's  SSP5 -8.5 scenario from which will see an increase of 5.7 C  by 2100.  This is also  the level expected by the Bulletin of the Atomic Scientists - which noted two years ago that IPCC climate report understated the threat then.

In other words we would see the advent of an entirely new potential V(x,c) -  with c > 600 ppm, and a catastrophic global equilibrium. Climate blogger John Atcheson cited a prime reasons why this is highly probable last September:

Most of the climate-related estimates you hear in the news and from the IPCC have built in assumptions that we humans will take necessary actions to mitigate the worst of the climate crisis. There’s no evidence that making such assumptions is a prudent thing to do. We’ve known about this unfolding tragedy for three decades now, yet we’ve been steadily increasing the amount of greenhouse gasses we release.

In other words human behavior is not going to change in the short term, any more than it has in the longer term.  So one's best bet is to project the most dire SSP5-8.5 scenario on the temperature change- which means 5.7 to 7.0 C or effectively runaway greenhouse level.  Again, conforming to the projected increase in CO2 concentration by 2100.  Alas this means one sentence in the WSJ editorial is the only one that bears attention:

"In any case, nothing progressives want Mr. Biden to do will affect the climate or even reduce global CO2 emissions."

See Also:
EXTREME HEAT
)Brutal heat dome moves east, with Central Europe set to swelter
The death toll from record-breaking temperatures in Europe is rising, with Portugal recording some 1,000 fatalities.
And
The planet is baking. But what’s reality to this Supreme Court?
And:
Bjorn Lomberg - Climate Change Clown Has No Clue Concerning Adaptation To A Rapidly Warming World
Posted by Copernicus at 8:06 AM