THE KEYSTONE PIPELINE- The True Facts About Keystone XL's Shutdown 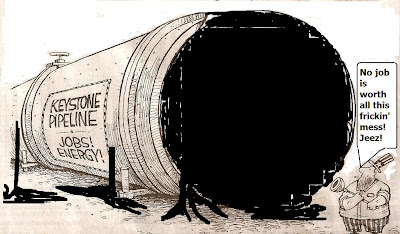 Amidst the epidemic of ‘blame  Biden’ memes on the Right is the one that closing down the Keystone pipeline is mainly why gas prices have spiked. This is baloney.  Malarkey. Twaddle.

Ever since the Biden administration cut off  Russian petroleum products and assets, social media  (especially on the Right) has been rife with memes that blame rising gasoline prices on “the cancellation of the Keystone Pipeline.”   And in the next breath, blame Biden for being responsible. Example from Telegram:

“Sooo, if shutting down Russia’s pipeline(s) will hurt their economy, wouldn’t shutting down ours hurt our economy? Asking for a buddy.”

Uh, no, Bozo.  No surprise here that nearly all of the criticism emanates from clueless or ignorant nitwits who recycle truthiness almost like they breathe. Even former Trump VP Mike Pence was not immune to such babble, i.e.:

“Gas prices have risen across the country because of this administration’s war on energy — shutting down the Keystone Pipeline.”

Meanwhile top GOP Assclown Jim Jordan, who can hardly wait to preside over a bogus investigation of the J6 Committee - say if the Reeps take back the House because of too many stupid voters - barked:

As in the case of general inflation and earlier COVID - i.e.  vaccines, lockdowns, masking etc.-   the Reeptards can't help trying to make political capital out of lies.  That's because they know there are tens of millions of lazy, gullible or stupid people who will gobble them up.  But hold strain, because here’s what really happened: No one "shut down", "canceled", or cut off the Keystone Pipeline. It is fully operational, daily delivering 590,000 barrels of tar-sands oil in Canada to U.S. refineries.

"What, are you kiddin' me? Biden shut it down because AOC and the green commies made him!"

Nope. Thou shalt not be a dope.  The real answer is much more pedestrian.  What most of the Biden critics think is the “Keystone Pipeline” is actually a 1,700-mile “shortcut” called Keystone XL, or KXL  What has happened is a conflation of the KXL with the Keystone pipeline proper.  The former would have sliced through Montana, South Dakota, Nebraska, Kansas and Oklahoma to the Texas Gulf Coast, delivering 830,000 barrels of tar sands oil per day. Many residents of those states fought fiercely against the pipeline cutting through their land.

Never mind. Because of the above conflation the cry:  “Build the Keystone Pipeline!” has become a social media mantra of the Right's trolls.  As if the United States could so decree. In many respects this is similar to the nincompoops who yelp that Biden "should have stopped the Russian invasion of Ukraine by now".   All those little kids being clobbered by artillery, missiles, after all.  But what would they want him to do? Send in a CIA hit team to take out Putin?  Start a nuclear war by hurling cruise missiles into Moscow?  And what would that mean for the other NATO member states?

Fact Two: It is the Canadian firm, TC Energy, formerly TransCanada, that officially terminated the KXL project once President Biden withdrew its permits.  Even if construction on the pipeline began tomorrow, KXL could not be up and running in less than five years. The KXL pipeline was a project developed by a foreign company that would have delivered foreign oil products to mostly foreign markets.

Why would the right's ever 'righteous' sunshine patriots be okay with such a loss of national autonomy?  Inquiring minds want to know. Especially when they're constantly screeching about migrants taking over the border states.

Fact Three:  When Trump re-permitted KXL in 2017, his own State Department reported that it would not lower gasoline prices. As I've written in previous posts, the price of oil is set by the global market and certainly not by U.S. presidents. Again, ignorant or stupid people - mainly on the Right (for some odd reason) - declare presidents having unlimited powers. (Despite the fact Trump exercised his to the limit even getting his toadies to ignore House subpoenas during his raucous reign.).

Further, let's please note the KXL project - irrespective of the howling trolls - was just about dead for a number of other reasons, including litigation from aggrieved property owners whose land TC Energy seized by eminent domain. (How about that for violation of sovereignty?)

Reepos also need to be reminded that rendering gasoline from tar sands oil - the planet’s dirtiest petroleum- is far more polluting and energy-intensive than conventional refining.  From all points of view, the Right's anti-Biden trolls need to stop whining about Biden blocking the "Keystone pipeline" and ingest a bit of reality - especially before trying to take his poll numbers down even further.

Posted by Copernicus at 8:46 AM