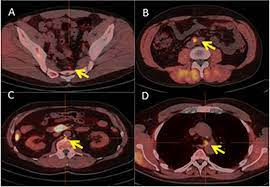 One patient's results following an axumin PET scan
Following a visit to the urologist's last week, a number of in- office tests were made, including an ultra sound to detect bladder retention of urine.  (It's well known that voiding issues are a recognized sign of prostate cancer).  None of the tests, however, delivered an unambiguous reason for why my last PSA (in May) had shot up to 8.7.

Stumped,  the urologist suspected prostate cancer  "mets" (metastases) might be involved. Thus he ordered what's called an axumin positron emission tomography scan to be done - scheduled for this afternoon.  These fun facts were found at one (Boston U.) website.

Axumin is indicated for Positron Emission Tomography—Computed Tomography (PET/CT) imaging in men with suspected prostate cancer recurrence based on elevated blood prostate specific antigen (PSA) levels following prior treatment. The higher the PSA, the more sensitive the test (>2 is best). Axumin PET CT is a new and valuable tool in managing the treatment of prostate cancer.

Patients with suspected prostate cancer recurrence make the best  candidates.. The patient has been diagnosed and treated but now has a rise in PSA. Axumin is most sensitive in patients with a PSA of 2.0 or higher but still valuable below 2.0. Axumin is also effective in cases with a high doubling rate.

Axumin PET CT can detect tumor recurrence in the treated prostate bed as well as local and distant lymph node and bone involvement. This helps the clinician determine the proper treatment.

Axumin PET CT is less sensitive for recurrent tumor detection in patients with a PSA level below 2ng/ml. If the PSA is above 2ng/ml, the detection rate of tumor recurrence is 91.7%. If the PSA is less than 1, the detection rate is 37.5%. Axumin may not accumulate in densely sclerotic bone metastases, so careful review of the CT images is necessary. In addition, a supplemental radionuclide bone scan may be necessary. Axumin uptake can be detected in benign prostatic hypertrophy nodules in residual prostate tissue.

Patients need to fast for four (4) hours. Scans begin 3 to 5 minutes post injection. Scans last 20 to 30 minutes. Patients lie on their back with arms above the head. It is critical that patients are on time for their appointment as Axumin (like FDG) has a short expiration.

The main component in the scan is the use of a radioactive tracer, 18- F -Fluciclovine, details for which can be found on this radiographic site:

Basically, the patient gets the injection and the scanning commences in 5-7 mins.  The whole scanning procedure lasts from 40-45 minutes.  The tech who called to remind me of the appointment just a half hour ago said that after the intravenous injection drip was in place she'd begin taking images shortly thereafter.

Given the powerful resolution of this tool in detecting mets, there is little doubt it's going to be ever more widely prescribed by oncologists, urologists.  Since significantly more men are seeing their PSAs rise after treatment (biochemical recurrence) as well as failure of  followup (salvage )therapy - I'd expect thousands more to have this scan done in the next few years.

What happens if a bone met is found?  Well, the urologist indicated 1-5 would need treatment.  He said he will advise use of targeted stereotactic body radiation therapy (SBRT) along with 6 months of Lupron.  (The Lupron addend went out by yesterday p.m. when he phoned to report the in-office blood test showed a whopping low testosterone level of 105 - when 294 is the baseline.  Since it's already low it doesn't make sense to involve Lupron to make it lower.)

Still, he is setting up another appointment with an oncologist to also discuss that as well as another issue, why the hematocrit part of the blood panel is so high - at 63. This could be part of why I've been suffering with low oxygen the past four months (readings of typically 77- 86% on the pulse oximeter) or very near Covid territory.  Thus, the red blood cells are trying to "make up" for what the lungs can't do.  (Though I am now somewhat better after using an oxygen concentrator  machine every night.)

As I noted in a previous post these oxygen issues are likely due to the lung condition known as bronchiectasis. This was detected in an earlier CT scan. See e.g.

Posted by Copernicus at 6:54 AM