Examining The Nature Of Sunspot Cycles (2)

The origin of sunspot cycles is attributed to a dynamo model proposed by Babcock and Leighton, whereby solar flux tubes are subjected to twist (with the magnetic pressure increasing internally)  leading them to attain a high torsional component which causes them to "twist" up and also move from more northerly to more southerly solar latitudes where most active regions (ARs) form.

Suspots exhibit a definite periodicity but in addition do not occur randomly on the solar surface but are instead concentrated in two distinct latitude bands best seen in what is called a “butterfly diagram”, e.g.

Here we can see that the sunspots are confined mainly between heliographic latitude 30 N and 30 s, in a wide interval of time from before 1880. Note each “wing” edge to the left shows the beginnings of each cycle – where sunspots first appear. Following the “wing edge” downwards one sees that spots migrate toward the solar equator where they disappear until the next minimum.

This form of equatorial migration or motion in a given cycle is known as Sporer’s Law. This suggests an underlying flow or wavelike propagation that may be tied to shear variability near the solar tachocline, e.g. 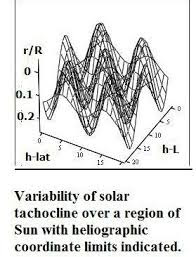 Representation of shear variability near the solar tachocline.

In the diagram, the axis defined h-lat denotes the heliographic latitude and h-L the heliographic longitude, while the vertical axis denotes the fraction of solar radius defined from “0” or the tachocline.  The peaks and troughs can then be interpreted as mammoth “shear waves” which will affect the meriodonal flow and could possibly have been responsible for the long delay of sunspot emergence in solar cycle 24.

For their part, the torsional oscillations tend to occur about 1000 kilometers below the Sun's surface (photosphere) but we have few instruments that can actually probe that deeply.  Clearly there is a case to be made for solar "sounding" which might help to discriminate between the classical (e.g. Babcock-Leighton) dynamo theory and new ones involving "shallow" dynamos.

In classical dynamo theory we are looking at the process by which the solar magnetic field is generated through a combination of rotation and convection. We refer to the two parts of the dynamo process the a-effect and w- effect.  In the latter, the shear flows (such as visible in the tachocline diagram) are able to stretch the photospheric magnetic field lines in the direction of the shear while in the former, helical flows are able to lift and twist field lines into orthogonal planes.

These two complementary aspects and effects (defined as a and w)  are illustrated below : 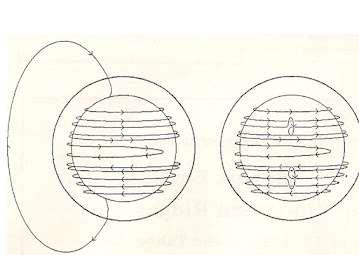 Note the expansion and direction of the reference field line for the w- effect,  and conversely the compressed nature and field line directions for the a-  effect.  Given below are the four primary equations pertaining to magnetic induction :

The basic equation for solar dynamo theory is given by (1) which is constructed from Maxwell’s equations and the solar form of Ohm’s law. See e.g.

Using cylindrical coordinates (r,  q,   f) the equation (1) can then be written in terms of the azimuthal component of the magnetic induction and the poloidal component , or B p = (Br ,  B j)  =   Ñ X A, where A is the vector potential.  This yields the  pair of coupled equations(3, 4). Where U is the mean fluid velocity consisting of a meriodonal flow, U p  and a differential rotation, Uj. If one neglects the former, then equation (4) shows that the poloidal field is produced by the a - effect.

Conversely, equation (3) shows the toroidal field is produced by both the a - effect and the w- effect where the   B p field is stretched by differential rotation. It is important to note that the relative strength of the terms determines the properties of the particular dynamo.

Given all the variations on the basic dynamo effect, including the a2 - w dynamo, it is perhaps not surprising that novel or emergent phenomena can manifest. For example,  ephemeral photospheric regions (EPRs) might be the first phenomena to be accounted for in advance of actual sunspots  and tied to certain dynamo actions. They are often portrayed as "inverse ion hurricanes". As the name implies, EPRs are not very stable or long lasting, usually appearing as small pores, then vanishing in 1-2 days.

A fully consistent shallow dynamo theory needs to present sufficient observational and numerical analyses to back up the supposition that a super-adiabatic temperature gradient is largest near the surface and a large sunspot can be supported by the associated latent energy through the reaction:

Sunspots are formed when strong magnetic fields rise up from the convection zone, a region beneath the photosphere that transfers energy from the interior of the Sun to its surface. At the surface, the magnetic fields concentrate into bundles of flux elements or tubes, which prevent the hot rising plasma from reaching the surface. This energy deficit causes the magnetic bundles to cool down to temperatures about 1,000 degrees lower than their surroundings. They therefore appear darker against the hotter, brighter background.

The problem now is to explain this descriptive model basis by using the dynamo theory previously described.   Following on from the Solar Physics Division meeting I attended in 2008, it has been clear that many questions remain to be answered. For example, particularly baffling have been the early preponderance of spotless days observed with cycle 24.  (Its spotless day numbers trumped by only two others: for the Dalton Minimum, and the Little Ice Age)

This, along with similar aberrations in cycle 23 pose special problems for classical solar dynamo theory.  It could very well be, as Prof. Thomas Woods suggested at that conference, we may need more updated models of the solar tachocline to account for the visible disparities.

In his own paper: Solar Irradiance: Recent Results and Future Research Plans’   Woods noted disparate periods where solar irradiance measurements varied widely but shouldn't have.  These included: the Sporer Minimum (1400s),   the Maunder Minimum (1600s),  and the Dalton Minimum (1800s).  Clearly much more theoretical - and practical work  - needs to be done before we can be satisfied regarding the origin of sunspot cycles.

Posted by Copernicus at 7:22 AM