More Balderdash On The JFK Assassination - And The Portrayal Of Jack Ruby As Some Righteous "Avenger". 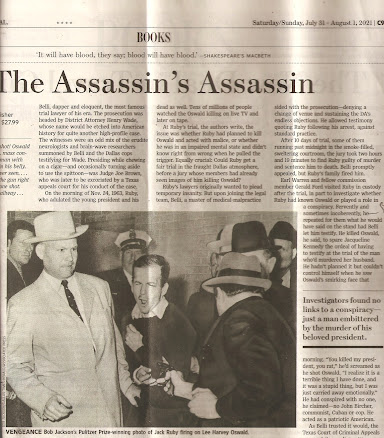 While, for the most part, major media tend to temper their takes on the JFK hit, this has not been the case with the Wall Street Journal.  The cumulative codswallop written by assorted WSJ contributors over the past 35 odd years is enough to fill a small library.   And codswallop is the name for the current entry ('The Assassin's Assassin'),  a book review of   'Kennedy's Avenger'   by Dan Abrams  and  David Fisher.
Reviewer Edward Kosner   starts off repeating one of the most enduring howlers, i.e. "The Warren Commission concluded that Oswald acted alone and ever since no one has produced any real evidence to refute that."
In fact, there is tons of such evidence if one only has the will to look as opposed to just buying into the Warren  Commission Fables.   Perhaps the most 'in your face' evidence (which the Warren Commission never published) are the actual autopsy photos - one of which is compared below to the manipulated image used by the WC: 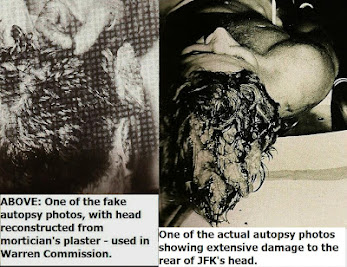 On the left is the altered autopsy photo – to conform with the specious Warren Commission claim that the kill shot was from behind-  where Oswald was alleged to be in the TSBD. To the right is the actual massive, rear head wound Parkland surgeon Charles Crenshaw beheld in Parkland's Trauma Room One but also visible in the Bethesda autopsy.  This wound could only have been made by a shot from the front. Where Oswald was not.  As Crenshaw wrote ('JFK: Conspiracy of Silence', p. 10):

“I was amazed. They were pictures of President Kennedy’s autopsy taken at the Bethesda Naval Hospital, Bethesda, Maryland.  But the photos showed a back of President Kennedy’s head that was different from the wound I witnessed They indicated a contrasting scenario, one that would support the theory of a lone gunman firing from the sixth floor of the Texas Book Depository .”

In other words, the WC deliberately "cooked the books" to push the fake lone gunman story of Oswald being the lone assassin. This fact along with the record of (4) shot acoustic impulses, with two of the impulses only 1.8 seconds apart confirms at least two shooters. (Given Oswald's Mannlicher Carcano rifle had a bolt action recycling time of 2.33 seconds).   Then there is the issue of the rifle itself, which even a crack team of Warren-appointed rifle experts was unable to use to duplicate the feat, e.g.
This is why Former Justice Dept. Special Agent Walt Brown offers perhaps most trenchant observation on Oswald’s alleged rifle (Brown, ‘Treachery In Dallas’. p. 26):

"The Mannlicher-Carcano rifle was an anachronism even by the time its weary Italian users were surrendering them en masse in the 1940s. The gun had begun its production run in 1891 and can be seen today for what it was: a product of mass warfare concepts of its  time, in which huge armies charged each other, volleys were fired, and the bullets hit someone or something."

All of this in concert, and especially given the acoustic record and actual autopsy photos, may be why the HSCA concluded:

"The Committee believes, on the basis of the evidence available to it, that president John F. Kennedy was probably assassinated as a result of a conspiracy. The committee is unable to identify the other gunman or the extent of the conspiracy.

Supreme Court Justice Oliver Wendell Holmes once simply defined conspiracy as "a partnership in criminal purposes."(1) That definition is adequate. Nevertheless, it may be helpful to set out a more precise definition. If two or more individuals agreed to take action to kill President Kennedy, and at least one of them took action in furtherance of the plan, and it resulted in President Kennedy's death. The President would have been assassinated as a result of a conspiracy.”

Reviewer Kosner  then recites the central claim of Abrams and Fisher  that Jack Ruby (aka Rubenstein) shot Oswald merely to spare Jackie Kennedy hours of horrific exposure in a trial.   But long time researcher James Di Eugenio splatters this B.S. into so much recycled dog drool.  Eg. (Reclaiming Parkland,p.198):
"Why did Ruby do it? Ruby's initial rationale, to spare Jackie Kennedy from testifying at Oswald's trial, was so strained as to be humorous.  Yet (Vince) Bugliosi repeated it (in 'Reclaiming History') without comment.   This is a story that Ruby's trial lawyer- Melvin Belli - said he was sure was false.
This is why, of course, Belli wouldn't let the dodgy schmuck testify.  Yet we are expected to believe the authors that Ruby finally  came clean to Earl Warren and Gerald Ford when they visited him after the trial.  In Kosner's parlance:
"Fervently - and sometimes incoherently- Ruby repeated for them what he would have said on the stand had Belli let him testify. He killed Oswald, he said, to spare Jacqueline Kennedy the ordeal of having to testify at the trial of the man who murdered her husband.  He hadn't planned it but couldn't control himself when he saw Oswald smirking."
A nice patter, except it's all B.S.  Ruby was there because he had a contract to fulfill and that meant ensuring Oswald didn't live to talk.  The document trail unearthed by Mark North ('Act of Treason') is revelatory here. North's FOIA -released files showed Ruby had an outstanding  debt to Uncle Sam - owing more than $40,000 in back excise taxes to the federal government, plus $20,000 in other back taxes.

North unearthed many of Ruby’s Mob connections in his book, including his reported “gangster connections in Dallas”, especially to Joseph Civello, the Dallas Mafia boss[1]    The same files disclose that Ruby, on October 26, 1963, “placed a 12 minute person to person call to Irwin S. Weiner at Weiner’s Chicago home”.

It is further noted that Weiner was a “prominent Mafia associate” and “instrumental in coordinating the flow of cash between the Teamsters and casinos”.[2]

A phone call (also documented)  then would have assured Ruby his tax problems would “disappear” if he performed one more job: offing Oswald. Given the mob link to ZR/Rifle, such a scenario would be totally logical. Few people today, unless they've  mined the document trail, are remotely aware of the extent to which the CIA and Mob worked hand in glove, especially on the ZR/Rifle Castro assassination operation.
We also know mobster Johnny Roselli was offed before he could provide any testimony to the House Select Committee on Assassinations (HSCA) about Ruby's true role. Thus it was that prospective  HSCA witness Roselli met his cruel end, as described below by Gaeton Fonzi in 'The Last Investigation', p. 375:
"In July, 1976, Roselli had disappeared and in August, the month before the Committee (HSCA) was established, Roselli surfaced in the shallows off the Intracoastal Waterway in North Miami. He had been smothered to death and shot, then cut open from chest to navel. His legs had been hacked off and stuffed with his torso into a 55-gallon steel drum which was wrapped with heavy chain and moored to a weight in the water. The mooring broke when the gases from Roselli's decomposing body forced the drum to float to the surface."
The killers wanted to make damned sure there were no flapping gums to contradict the fairy tale about Ruby the "noble JFK avenger". They wanted to ensure Roselli never talked about Ruby's role - or his connections - to do with  eliminating Oswald.  History shows the killers succeeded beyond their wildest expectations. This is given so many in the wake of Roselli's murder have been snookered into buying the hog swill that Ruby was basically a decent guy shielding Jackie.
Alas, both Abrams and Fisher can now be counted among the snookered, as well as reviewer Kosner.