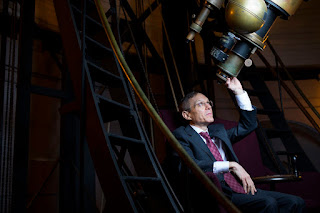 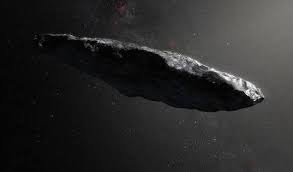 Oumuamua - first thought to be an alien artifact by Loeb

Many cosmic enthusiasts may recall the name of Harvard astronomer Avi Loeb from the brouhaha that erupted in 2019 following his observations of a mysterious solar system interloper dubbed Oumuamua.  In a New Yorker interview, Loeb cogently argued that the observed behavior of the object meant:

"It can’t be, as is commonly imagined, a clump of rock shaped like a long potato, but rather an object that’s very long and no more than 1 millimeter thick, perhaps like a kilometer-long obloid pancake — or a ship sail — so light and thin that sunlight is pushing it out of our solar system."

This followed the controversial publication of his co-authored paper appearing in   Astrophysical Journal Letters  in November.

The blowback from peers was indeed as fierce as one might expect as if he'd co-authored a paper on UFOs as opposed to a trans-stellar object or artifact  powered by solar radiant energy. For example,  Paul M. Stutter, an astrophysicist at Ohio State University,  shortly after the paper was published,  tweeted

'Oumuamua is not an alien spaceship, and the authors of the paper insult honest scientific inquiry to even suggest it,"
Now, following new research by Steven Desch and Alan P. Jackson, it may all have been a literal "tempest in a teacup".   Their new analysis e.g.
[2103.08812] 1I/'Oumuamua as an N2 ice fragment of an exo-pluto surface. II. Generation of N2 ice fragments and the origin of 'Oumuamua (arxiv.org)
Suggests the mysterious cosmic interloper is made primarily from nitrogen ice and was ejected from the surface of a Pluto -like body orbiting a star in another solar system. In that respect it bears resemblance to Avi Loeb's hypothesis -  but not that it is actually an artifact.
The astronomers' new analysis takes into account Oumuamua's size, its shininess  and the conditions it would have been exposed to in interstellar space -  as well as the component of its acceleration not arising from gravity. By use of these criteria the researchers narrowed the list of potential materials, finding the substance that best fits all the attributes is nitrogen (N2) ice.
The authors further note that N2 ice is not an exotic material in our own solar system.  For example, both Pluto and Triton are swathed in N2 ice. In effect: "Oumuamua could have originated from a Pluto-like exoplanet  that ejected ice fragments from its surface."
Their further calculations disclose Oumuamua may have been launched into space about a half billion years ago from a solar system potentially located in the Perseus arm of the Milky Way galaxy.  Such ejection from the exoplanet could have resulted from orbital instabilities similar to those evident in the early epoch of our own solar system's history.
See Also:
ASU scientists determine origin of strange interstellar object | ASU News
Posted by Copernicus at 5:42 AM