Examining The Nature Of Sunspot Cycles (1)

Astronomers know that the Sun exhibits an 11-year average sunspot cycle. This means that every eleven years - on average, sunspot numbers reach a peak, or what is called the "solar maximum".   Superimposed on this is a 22-year cycle, for reversal of magnetic polarities to occur in the "leading" spot. To fix ideas, consider the top part of 9-1 above to be a photograph of a pair of sunspots. Then S2 would be the "leader" spot and S1 the "follower", assuming that their orientation is in the direction of the Sun's rotation (east to west).

The 22-year cycle means that 22 years must elapse before leader spots again have negative polarities at sunspot maximum. In the intervening, or 11-year maximum, the leaders will all have positive polarity.  Of course, the frequency of sunspots in different and succeeding cycles is subject to change. To understand the limits of such variations it is useful to examine and closely compare  series of three sequenced (i.e. consecutive)  monthly sunspot numbers  over the past 250-odd years,  based on the 11-year periodicity.  In the diagram below the spot numbers over time from 1750, occurring as cycles are shown: 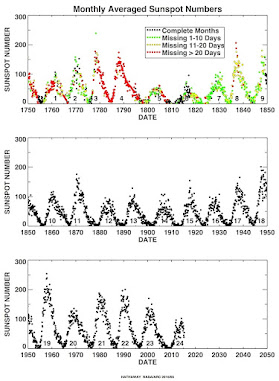 A sketch of the “monthly smoothed sunspot counts” extending from 1749 through 2014 is shown below for comparison: 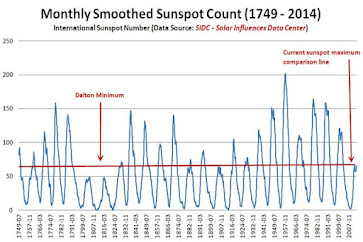 What is of greatest interest currently for solar physics (especially after solar cycle 24) is the reason for the variations – including very low sunspot counts – within these 11- year periodic intervals. Many solar physicists now believe this has something directly to do with the dynamo based on the Babcock-Leighton model. This is why new diagnostic tools have been put to use, including analysis of solar oscillations.

Where g is the number of sunspot groups, f is the number of individual spots and K is a correction factor, i.e. applied to the observations from each observatory. ‘K’ factors in variances arising from telescope aperture, atmospheric conditions and so on.  ‘R’ gives extra weight to isolated spots mainly because they are rare.  In any case, it is important to understand that R typically underestimates the number of sunspots because it is not determined with the most powerful high resolution instruments. (Such as Sacramento Peak Observatory Photos).

A more serious problem is that ‘R’ is a less significant indicator of activity than the sunspot area A.  Thus, as I determined in a 1984 paper,  the major (geo-effective) flare frequency F was related to the sunspot area A (in millionths of the solar hemisphere), according to: 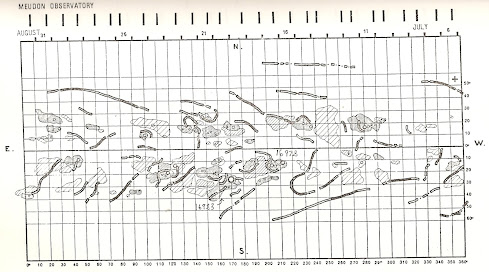 Graphical representation of one Carrington rotation from Solar cycle 20

For example, if 254 total spot classes were enumerated for Carrington Rotation 1695 and 37 were designated complex then the complexity ratio is: