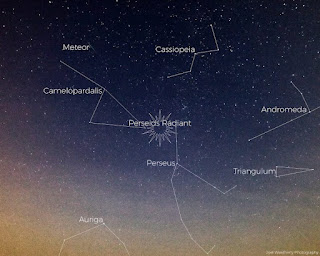 Location of Perseid radiant as observed from Edmonton, Alberta.

The Perseid meteor shower always provided some of the best celestial fireworks when we lived in Barbados. Generally, we'd get  a group together from the Astronomical Society, then find a beach guaranteed to have dark skies,  and watch from lawn chairs - generally from midnight right to 5 a.m.  We were never disappointed.

Today-   actually starting this evening-    the peak of the annual Perseid meteor shower will occur  through the pre-dawn hours of Thursday. Fortunately also, most of the night the Moon will not be visible, which means the sky will be as dark as it gets. In Barbados we called it a "meteor Moon."

To fix ideas, the Perseids occur annually when the Earth passes through a trail of debris left by the comet known as Swift-Tuttle.   The air show began on July 14 and concludes Aug. 24. When the peak occurs from this evening (extending through the 13th) patient observers could see 50 to 100 meteors per hour. They will be burning up in the Earth’s atmosphere — or skimming it — at speeds equivalent to traveling the 66 miles from Denver to Colorado Springs in less than 2 seconds.

The general consensus is that other meteor showers are stronger, more brilliant,  but in the Northern Hemisphere they occur in colder months when sky gazers may not be willing to bundle up, hunker down and watch the nighttime show for literal hours. (The Perseids always occur in August.)

According to a NASA educational website, the Perseids tend to be very fast and bright with long “wakes” of light and color. They are also known for producing fireballs, which often are meteors that explode in the atmosphere rather than simply burning up.

In Barbados' observational history one of the most powerful fireballs ever startled thousands of Bajans as it blew up over Mount Tenantry in 1990.  That single sensational event made instant meteor watchers out of thousands, and for years to come.

John Keller, director of the Fiske Planetarium at the University of Colorado in Boulder, explained in a recent Denver Post piece that the definition of “fireball” is an ambiguous term.  Generally, it's reserved for meteors that appear to brighten dramatically and then disappear really quickly right at the end of entry.  According to Keller:

“The latter type of fireball is a case in which a larger object was being heated by friction with the atmosphere and then exploded into lots of smaller pieces of rock which vaporize even more quickly, because the surface-to-volume ratio significantly increases after one object becomes several thousands to millions of smaller objects.”

As for the comet that left all this debris behind, Swift-Tuttle is currently more than 3.7 billion miles from Earth on an orbit around the Sun that takes 133 years. Its most recent close approach occurred in 1992. Swift-Tuttle is approximately 16 miles across, and several websites say it could end life on Earth if it struck the planet (Fortunately, we won’t have to worry about that until the year 4479).

Here are some pointers for viewing the Perseids between sunset Wednesday and sunrise on Thursday:

1- Be sure to find a really dark area devoid of street light glare, or other light pollution.

2-  Be prepared to keep watch for at least two hours to get the most out of the experience.  Given the meteors come in bursts, and average 50- 100 per hour, it makes sense that the longer you observe the greater the probability of reward.

3-  Pay attention to the time and altitude of the meteor radiant, or where the Perseids appear to emanate from

According to the American Meteor Society (AMS), the Perseids meteors will appear low in the northern sky in the evening. In the words of one spokesperson:

“This is the worst time to try and view the shower for sheer numbers, as most of the activity will occur beyond your line of sight, being blocked by the horizon.  But the few that do come your way this time of night are special. The reason is that they just skim the upper regions of the atmosphere and will last much longer than Perseids seen during the morning hours. Since they last longer, they also will travel a much longer distance across the sky. … Occasionally one will pass overhead and will be unforgettable as you watch it shoot across the sky for several seconds.”

Around midnight, according to the AMS,, the meteors will only last for a few tenths of a second.  But despite being shorter in duration, their frequency should increase as the night progresses. The best time to watch may be just before dawn when the area of the sky where the meteors occur is highest in the sky, usually around 4 a.m.

Weather permitting, Janice and I plan to be out early in the a.m. with our binoculars.  If we see anything amazing or awesome I will be sure to write about it on Brane Space.