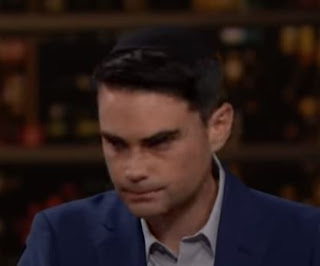 First, some full disclosure: Before Friday night I'd never heard of conservative commentator Ben Shapiro.    Nor had I heard of his 'head fake' book ('The Authoritarian Moment') which - when you google it- you learn is based on a fake premise.  Picking at a fanciful "liberal" authoritarianism  when the actual version is all on the Right with the Trumpers and their Hitler wannabe.

Anyway, this feral looking, fast-talking closet Nazi (similar to another Nazi wannabe, Stephen Miller), was left frustrated during his appearance on Real Time with Bill Maher.   This was after counterterrorism expert Malcolm Nance educated him on authoritarianism.   The real version, not the phantom "left"  form Shapiro manufactured for his forthcoming book, to provide cover for the traitor Trumpists and autocrats everywhere.

Since it was evident Shapiro stands with this lot, and yet wears a Jewish kippah, it is clear he is akin to a Sonderkommando.  This is the set of Jews who helped herd Jewish victims into the gas chambers at Auschwitz, then hauled the bodies away to the ovens afterwards.

In the same manner Shapiro,  via his providing cover for the Trump authoritarians,  is mental- herding millions of mindless sheep into the modern  autocrat version of "mind camps".   The fact this imp is so popular and making so much money off these would be mental slaves shows it is a valid conclusion.  Even Maher, not always as quick on the draw as he fancies, fessed up he thought Shapiro's book was about Trump authoritarians, not the left soft, critical version.  Here, alas, Maher lapsed into false equivalence with his nonsense "I certainly have made that case myself and woke Twittter has power!" Uh no, Bill,  you haven't made any "case" given Twitter is not the same as the destruction and terror of heavy- handed Trump Nazis!

To his credit, Maher did concede the Twitter -Left power was soft  and he did point out the book's imbalanced presentation to Shapiro, i.e.:

"I'm just finding it perverse you find that less alarming than the old School style of authoritarianism Trump and his ilk are fulfilling."

"He's only not president because it didn't work,  not that he didn't try to pull it off."

Though it could have worked had the newly appointed (by Trump)  DOJ traitor Jeffrey Clark succeeded in purging Jeffrey Rosen.  Thereby taking over his AG position and declaring the electoral votes of 6 states fraudulent and declaring new (Trump) electors had to be appointed.

This is why Shapiro's reply to Maher,  that for all the huff and puff about Trump's efforts the "institutions did not stand with him"  - was egregious. That's because it's small consolation after the recent revelations showing how close Clark and Trump came to succeeding in subverting the election.

At this point I'd also have queried how Shapiro - as a Jew-  lives with himself while mindful (?)  of the Trump minions screaming "Jews will not replace us!"  at Charlottesville four years ago.  How, indeed, could this Jew be a member of a party whose white nationalist members declare his kind null and void? Once more a latter day Sonderkommando comes to mind.  The Sonderkommando mentality indeed came through when Shapiro insisted the Left's power is "institutional"  when Maher repeatedly corrected him that, no, it's soft power.  Akin to negative gossip in a village.   Not like actively seeking to overthrow a government.

Here is where Malcolm Nance entered and literally took the beanied brat down at the knees, observing:  "Well, it's nice title for his book and some might assume he's talking about real authoritarianism and would then be trapped into giving him $28.99."   Adding:

"But let’s talk about bare facts. You’re talking about a guy, Donald Trump, who literally tried to suborn – or has probably suborned perjury – in order to overthrow a duly elected government, and managed to mobilize 40,000 people to lay siege to the Capitol, and over 1,000 or more entered the building, destroyed parts of the building, fought physically [with] law enforcement there, in order to stop American democracy. "

Adding further:  "You can't say some guys are writing on Twitter that Sean is doing this or that. Twitter will not kill you unless it provokes an action on the street "

At this point Shapiro tried to confuse the issue by objecting to Nance's numbers, and accusing him of "conflating them".  No he did not.  Estimates by Capitol police put the total number of the Trump mob at 30,000-40,000.  It put the number that actually broke into the Capitol building at 500-1000.  So Nance was at least in the ballpark, and he did take care to distinguish the total mob number from the renegades that actually broke into the Capitol.

When Nance then recalled going to Auschwitz for a conference on authoritarianism, Shapiro chirped up: "Are you really going to lecture me about Auschwitz?"    But clearly the deranged little rodent needed it given how he'd so easily joined and enabled a Right authoritarian fascist movement -  analogous to Hitler's National Socialists (employing  a deliberately deceptive name) that despised Jews like him.  Yet he was totally blind to it.

Even spewing lies i.e. that "Obama held hands with Fidel Castro's brother at a baseball game".  This was after Maher brought up Tucker Carlson in Budapest schmoozing with Hungary's  strong man Viktor Orban and:

"if a Democrat ever kissed up to a dictator like that..."

In fact, because Obama has that intangible called class, he briefly shook hands at a ceremonial event commemorating Nelson Mandela (not a ball game). But he followed it up with speech remarks criticizing dictatorships that neglect human rights. This is nowhere on the same  scale as Trump cozying up to Kim Jong Un ("We're in love!") or the Philippines'  iron-fisted dictator,  Duterte. 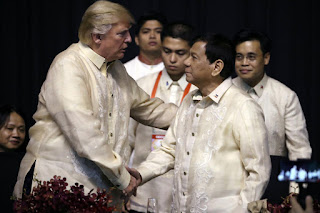 Trump in midst of his prolonged handshake with Duterte

Trump even gushed at the time how Duterte had "done an unbelievable job with the drug problem"  failing to note he'd used state-sponsored murder squads to get the job done.  But that is one authoritarian approving the work of another who he'd love to emulate.  In Obama's case it was being civil to a dictator in a public commemoration ceremony but taking his ilk to task in subsequent remarks.

Getting back to Sonder-Shapiro, he next carped about having to live in a "parallel universe" where Dems control all three branches of government and "are the ones handing down mask mandates, vaccine mandates, and lockdowns"   which he insisted were hallmarks of authoritarianism.  They are not, and in fact orders for vaccinations (smallpox) go back to the turn of the last century and are supported by law.   But this is why Nance asked him: "Do you know what a virus is?"

Maher then went off on a tangent about the "power of wokeness" i.e. in using the example of the NY Times not covering the lab leak theory of Covid's origin.  But in fact they have covered it, Maher just never saw the columns.  (E.g. The lab leak theory', by David Leonhardt, May 27, 2021, and 'Did the Coronavirus Come From a Lab?',  June 22)

"The last 4 years have seen the descent of the U.S. into almost sheer autocracy. I've been on this show where we talked about Russia backing Trump, like they backed Austria and Serbia, and France.   The entire Western world was teetering on the edge of turning into an axis of autocrats.  Then you talk about a few things on Twitter?  That ain't autocracy, son!  What  autocracy does is it destroys governments.'

Whereupon Maher came in with his false equivalence  again, chirping: "It's not autocracy but it is anti-freedom."    Which came over like a slow child's retort.   No awareness that freedom always has context and an essential accompaniment called responsibility.  It isn't absolute and can never be so.

Later, the conversation turned to CRT (critical race theory) and Shapiro claimed the controversial ideas associated with it are being taught in schools—a claim that has been advanced by many conservatives but which many teachers have dismissed as untrue.  I also showed this to be bollocks in a recent post, e.g.

Nance, to his credit, boiled the CRT controversy down to one simple, accurate point:  "Critical race theory is  a subject because the Republican Right has made it a subject. No real school board is mandating this as a course."

Which I had also pointed out in my post, noting the Reeps went out of their way to create dog whistle buzz words to fire up the fear centers of what passes for brains in their ignorant base.   In this case a loser named Christopher Rufo claimed credit for hijacking left terminology to turn it into a "potent political weapon."

The general theme of complaint about the left from both Shapiro (in his accusations of "authoritarianism") and from Maher - in his anti-freedom malarkey-  seems to turn on a belief the left uses political correctness  to cancel and limit speech.

But author Amanda Marcotte - in her book 'Troll Nation  -  How The Right Became Trump-Worshipping Monsters Set On Rat-F*cking Liberals, America, and Truth Itself '    -  explained the "sleight of hand"   the Right's  whiners use to create the "myth of political correctness", i.e.

"They conflate being challenged with being censored."

In this way she shows it is really the Right's whiners who want to stamp out free speech on the left, i.e.

After all, as she puts it, what are liberals doing when they challenge the Right's claims-  such as with CRT --  if not using their free speech to counter the Right's?   This is basically what we beheld with all of Shapiro's whining Friday night.  Complaining about how we progressives are challenging the Right's authoritarianism,  but being  called left authoritarians because we do.   That is the core basis of Shapiro's absurd book.