What Is Responsible For The Gap In Exoplanets Radius Distribution? 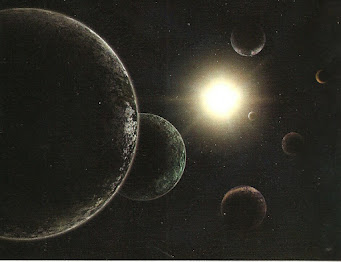 It seems like yesterday when we first heard of "exoplanets" and then one realizes it was twenty-six years ago that planetary astronomers discovered the first such planet orbiting a distant Sun-like star. Today thousands of exoplanets are known to inhabit our local swath of the Milky Way.  Ever since we've also been confronted by mysteries about these other words, including why there are so few "Goldilocks"  planets, those at just the right distance from the central Sun to potentially support life.

Another mystery - which may be related to the previous one- is that planets with radii just a bit larger than Earth's (6400 km)  appear to be relatively rare.  This has been referred to a a "radius valley" because a graph of exoplanets vs. radius shows a drop off at about 1.7 Earth radii.  Why is this?  Or better, how can it be explained since science avoids 'why' questions. 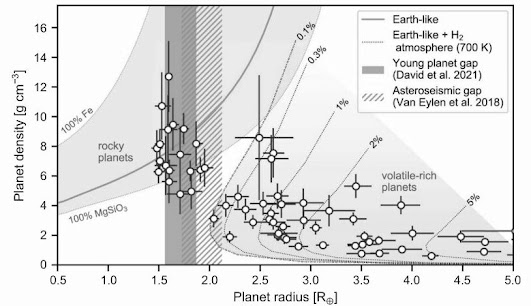 One version of graph of planet density v. radius

A team has now used observations of hundreds of exoplanets to show that this planetary gap isn’t static but instead evolves with planet age—younger planetary systems are more likely to be missing slightly smaller planets, and older systems are more apt to be without slightly larger planets. This evolution is consistent with the hypothesis that atmospheric loss—literally, a planet’s atmosphere blowing away over time—is responsible for this so-called “radius valley,” the researchers suggested.

In 2017, scientists reported the first confident detection of the radius valley. (Four years earlier, a different team had published a tentative detection.) Defined by a relative paucity of exoplanets roughly 50%–100% larger than Earth, the radius valley is readily apparent when looking at histograms of planet size, according to  Julia Venturini, an astrophysicist at the International Space Science Institute in Bern, Switzerland, not involved in the new research.

Trevor David, an astrophysicist at the Flatiron Institute in New York, and his colleagues were curious to know whether the location of the radius valley—that is, the planetary size range it encompasses—evolves with planet age. That’s an important question, said David, because finding evolution in the radius valley can shed light on its cause or causes. It’s been proposed that some planets lose their atmospheres over time, which causes them to change size. If the timescale over which the radius valley evolves matches the timescale of atmospheric loss, it might be possible to pin down that process as the explanation, said David.

In a new study published in the Astronomical Journal, the researchers analyzed planets originally discovered using the Kepler Space Telescope. They focused on a sample of roughly 1,400 planets whose host stars had been observed spectroscopically. Their first task was to determine the planets’ ages, which they assessed indirectly by estimating the ages of their host stars. (Because it takes just a few million years for planets to form around a star, these objects, astronomically speaking, have very nearly the same ages.)

The team calculated planet ages ranging from about 500 million years to 12 billion years, but “age is one of those parameters that’s very difficult to determine for most stars,” David said. That’s because estimates of stars’ ages rely on theoretical models of how stars evolve, and those models aren’t perfect when it comes to individual stars, he said. For that reason, the researchers decided to base most of their analyses on a coarse division of their sample into two age groups, one corresponding to stars younger than a few billion years and one encompassing stars older than about 2–3 billion years.

When David and his collaborators looked at the distribution of planet sizes in each group, they indeed found a shift in the radius valley: Planets within it tended to be about 5% smaller, on average, in younger planetary systems compared with older planetary systems. It wasn’t wholly surprising to find this evolution, but it was unexpected that it persisted over such long timescales [billions of years], said David. “What was surprising was how long this evolution seems to be.

These findings are consistent with planets losing their atmospheres over time, David and his colleagues proposed. The idea is that most planets develop atmospheres early on but then lose them, effectively shrinking in size from just below Neptune’s (roughly 4 times Earth’s radius) to just above Earth’s. “We’re inferring that some sub-Neptunes are being converted to super-Earths through atmospheric loss,” David told Eos. As time goes on, larger planets lose their atmospheres, which explains the evolution of the radius valley.

Atmospheric loss can occur via several mechanisms, scientists believe, but two in particular are believed to be relatively common. Both involve energy being transferred into a planet’s atmosphere to the point that it can reach thousands of degrees kelvin. That input of energy gives the atoms and molecules within an atmosphere a literal kick, and some of them, particularly lighter species like hydrogen, can escape.

In the first mechanism—photoevaporation—the energy is provided by X-ray and ultraviolet photons emitted by a planet’s host star. In the second mechanism—core cooling—the source of the energy is the planet itself. An assembling planet is formed from successive collisions of rocky objects, and all of those collisions deposit energy into the forming planet. Over time, planets reradiate that energy, some of which makes its way into their atmospheres.

Theoretical studies have predicted that photoevaporation functions over relatively short timescales—about 100 million years—while core cooling persists over billions of years. But concluding that core cooling is responsible for the evolution in the radius valley would be premature, said David, because some researchers have suggested that photoevaporation can also act over billions of years in some cases. It’s hard to pinpoint which is more likely at play, said David.  Adding:

“We can’t rule out either the photoevaporation or core-powered mass loss theories.”

Posted by Copernicus at 6:06 AM