Can An Exoplanet Exist In A Triple Star System? The Evidence Says 'Yes'


Let us recognize that one of the most formidable problems in all of celestial mechanics is the 'four body" problem, or how 4 objects can exist in a stable system under a central gravitational influence.  This has now come to the fore with many astronomers scratching their heads on evidently finding such a system 340 light years from Earth. (Note: Another such system, 51 Eri, is also trinary but dynamically different - see below.)

The planet in question is four times the mass of Earth and gets illuminated by not one but three different stars in a gravitationally bound triple star system (see illustration). In this system it takes 550 Earth years to complete one revolution around the central star. That central star, HD131399A, exceeds the Sun's mass by 80 percent or about 1.6 x 10 30  kg. It orbits a system  center of mass shared with a smaller star, HD 131399B which is itself orbited by another star: HD131399C.

In effect, with the planet one has a four body system. In celestial mechanics, the two body problem is most often treated in university courses, e.g. using a template such as: 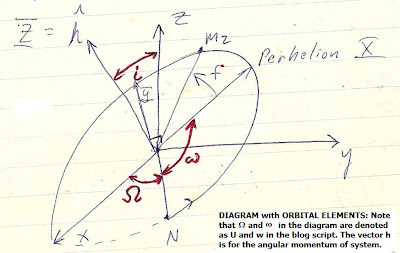 for a  planet of mass m2 in orbit about the Sun with mass m1, with thee orbital elements shown. More generally, given m1 >> m2, one treats a restricted two-body problem.

By extension for a restricted 3-body problem (with interacting masses m1, m2 and m3) one would take m3 small enough so it does not affect the motions of m1 and m2. In effect, m3 would denote a planet in a double star system consisting of stars of masses m1 and m2.

To see a simulation for a 3-body system (at time 3:10) one can go to this link. In this case the masses are all about equal.


For the triple star system shown, assigning the exoplanet a mass m4, one would have to analyze a restricted four body problem, with planet mass m4 small enough that it does not affect the motions of m1, m2 and m3.  Needless to say, this is a problem most astronomy majors would not run into even in an advanced (graduate level) celestial mechanics course. An actual optical imaging of the system is shown below (obtained using the SPHERE instrument of the Very Large Telescope in Chile): According to the Ph.D. student (Kevin Wagner) who discovered this exoplanet in the trinary system, publishing his findings in the July 7 issue of Science, e.g.   http://bit.ly.Jovian -3stars

For a quarter of the giant planet's orbit the paired stars (m2 and m3) set while the more massive star rises (and vice versa).


The University of Arizona researchers found the trinary's exoplanet (designated HD131399Ab) with direct imaging. In other words, rather than using indirect observations based on light curve variations they observed and studied light from the planet itself. It was also notably the first exoplanet discovered using the Very Large Telescope in Chile's Atacama Desert. This was accomplished using the telescope's auxiliary Spectro-Polarimetric High Contrast Exoplanet Research instrument. This is designed specifically to capture infrared radiation from an exoplanet while  blocking out light from surrounding stars.

What is most interesting about this new exoplanet is the orbital semi-major axis (a). In most trinary systems planets orbit close to one star while the other 2 stars are much farther away. As an example, take the system 51 Eridani for which the planet orbits a star at 13 AU (the Earth is 1 AU from the Sun) and the other two stars are at 2000 AU.  However, HD131399Ab orbits the major star at 80 AU - or twice the distance of the Sun from Pluto, while the twin stars (HD131399B and HD131399C) are at 300 to 400 AU from the central star.

According to Wagner, quoted in EOS: Earth & Space Science News (Aug 15, p. 8) this meant the exoplanet is trapped in a precarious balance amid the trio of stars' gravitational fields. He surmises that if the planet had been closer to components B and C it would have been "flung off" into space.

To see a specific (artist's)  simulation of the trinary system under consideration, go to: