As I pointed out in previous posts, the Sloan Deep Sky Survey is an important component of cosmological data providing us with not only a refined cosmic perspective but also accurate measures of the cosmos pertaining to its rate of expansion.  That dark energy was likely accelerating the expansion was known as long ago as 2000, from measurements made by the Maxima and Boomerang craft. The combined data enabled a power spectrum of spatial temperature fluctuations to be assembled (see graphic) using a spherical harmonic function fit.  The multi-humped graph  plotted mean square temperature. fluctuation (in micro-Kelvin on vertical axis) vs. multipole order  ℓ on the abscissa. This multipole order also coincides with the spherical harmonic order index  ℓ. The temperature differences dTi   appeared at angular separations of π/  ℓ and displayed a non-uniformity on angular scales of about 1.0 deg. The first peak occurred at  ℓ= 200 and the 2nd peak was asymmetrically spaced relative to it. 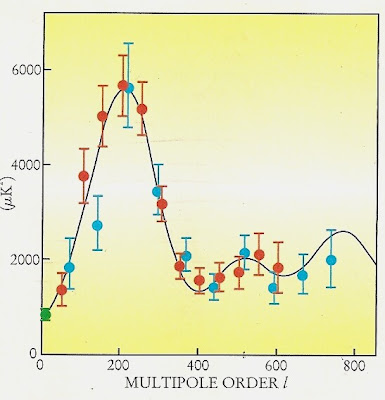 where the denominator refers to the critical density, which we worked out earlier for the current Hubble constant.
Thus if: r >   r c
(c = critical)

Then the cosmic density is able to reverse the expansion (e.g. decelerate it) and conceivably usher in a new cycle. (New Big bang etc.) The observations that help determine how large r
is, come mainly from observing galaxy clusters in different directions in space and obtaining a density estimate from them. The Boomerang and Maxima detectors showed that  W ~ 0.3 or that:

so there was no danger of the cosmos decelerating.
Subsequent precision measurements of the cosmic microwave background (CMB), including data from the Wilkinson Microwave Anisotropy Probe (WMAP), have recently provided further evidence for dark energy. The same is true of data from two extensive projects charting the large-scale distribution of galaxies - the Two-Degree Field (2DF) and Sloan Digital Sky Survey (SDSS).
The curves from other data with corrected apparent magnitude v. redshift (z) give different combinations of  Wdark to Wmatter over the range. However, only one of the graph combinations bests fits the data:

Wdark = 0.65 and  Wmatter = 0.35  =  W m
A later assessment of the data concluded that the combination could also be posed as an addition such that:   W m   +   W A    where the first term was associated with matter (including dark matter) and the second term was based on vacuum or "zero point energy". This then has become associated with dark energy or negative energy  giving rise to repulsion.
How to understand negative energy?  If your take a rubber band and stretch it outwards in all directions  you have to do work to expand it .We say the band exerts negative pressure. This is analogous to the outward condition of the expansion of the universe. DO it rapidly and you are analogizing accelerated expansion via vacuum energy. Conversely, if you seek to compress an inflated balloon you need to do work to compress it - so we say the air within exerts positive pressure.  But how would one integrate negative energy or vacuum energy into the cosmic picture of an accelerating expansion?  We can thank Saul Perlmutter (cf. Perlmutter, Physics Today, 2003)
for enabling this,  given he formulated the applicable equation of state, viz.   w = (p / r) = -1
Where p denotes the pressure and  r  the cosmic density. Solve for p, the pressure and one obtains:
p = - r

In other words, a negative pressure. This then meshes with general relativity's allowance for a "repulsive gravity" - since any negative pressure has associated with it gravity that repels rather than attracts.  More explicit formulation is possible when it is recognized that the accumulation of data now appears to show:
0.62 < Wdark < 0.76, where Wdark = rdark/ rc,

And a lower bound of:     p =  -1.3 / r
Some might argue that such cosmic repulsion shows a "new law" of physics, but it's merely extending the existing concept of gravitation to show it has a repulsive as well as attractive aspect, and has always been consistent with Einstein's general theory of relativity. The beauty of the most recent findings are that the cosmological constant - once believed by Einstein to keep the universe in a stasis condition - is now needed for the acceleration.   The preceding findings have been further confirmed by the Baryon Oscillation Spectroscopic Survey or BOSS survey —which  according to blogger George Dvorsky  “one of the most precise measurements of the expansion of the universe to date, and confirms a leading explanation for the dark energy physicists believe is driving  that expansion.” 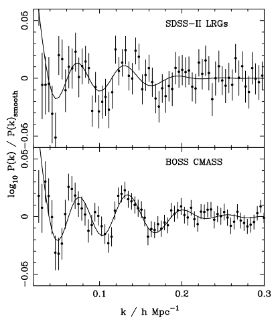 The power spectra from the BOSS and Sloan Sky Survey data - again based on spherical harmonic functions - are shown above and the careful reader can see the similarities with the Maxima/ Boomerang data from 16 years earlier.  (Graph preceding with yellow background)
It turns out that what we are in fact looking at acoustic oscillations, somewhat similar to what we saw for the Sun in my Feb. 27 post, e.g.
http://brane-space.blogspot.com/2016/02/a-look-at-solar-oscillations.html
but now confined to a baryon-photon plasma,  treated as a single fluid of baryons. Much like the solar acoustic modes we can again use the Legendre polynomials, e.g. P

)  to treat the acoustic oscillations. Only now, as a function of galaxy fluctuations of a given scale - related to the wave number k. (Abscissa for the lower graphs shown).
Note that the order of the Legendre polynomial ℓ  plays a similar role for the angular decomposition that the wave number k does for the Fourier decomposition. Thus, we see the earlier power spectrum (yellow background) is in terms of angular decomposition while the next pair of graphs (containing k) relate the Fourier decomposition. The point is that in each case accelerated expansion is revealed. For ℓ  >   2 the Legendre polynomials are oscillating functions containing a greater number of oscillations as ℓ  increases. Therefore, the value of is inversely proportional to the characteristic angular size of the wave mode it describes, i.e.

ℓ  =  1/  q
Enter now the startling image shown at the top.  Note that the image contains "voids" and points. The CMB fluctuations discussed earlier have evolved to today's voids. Thus each point shown represents a galaxy equivalent of 100 billion stars on average.. That means, according to Dvorsky’s calculations, that the image captures roughly 4.8 quadrillion  stars, but within an area of one twentieth of the entire sky.
More importantly, the relation of voids to points discloses an accelerating cosmic expansion based on vacuum energy.  The collected data from BOSS will soon be able to measure the cosmic expansion rate H(z) with 1-2% precision and ultimately enable more refined tests for the rate of cosmic expansion and the nature of dark energy.
See also:
http://brane-space.blogspot.com/2016/02/dark-matter-and-dark-energy-in-universe.html
Posted by Copernicus at 6:57 AM