Are Millennials Too "Cool" About National Politics? Probably 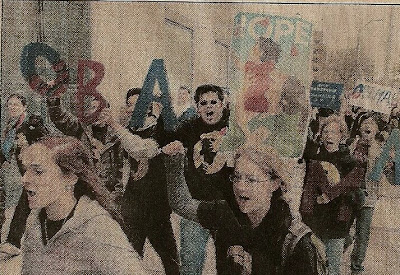 Colorado College students yell 'Obamanos!' on their way to the polls in November, 2008. Nearly 28 percent of eligible college age voters showed up that year. Will they do so this year or just say 'meh, no worries'?

Josh Zepps'  video effort 'We The People Live' (made at the DNC last month) was the subject of a July 30 post. Zepps had bemoaned how much  money was going to the needs of the elderly, especially via Medicare costs at the end of life, see e.g.

He used this to lambaste the "progressive orthodoxy" which he claimed selectively ignores this inexcusable largesse while dunning the young families, youthful segment of the population who support the elderly with their taxes.

I noted the validity of many of his arguments but also that oldsters are not primarily responsible for the maldistribution of  federal resources, especially medical care.. Now I will make the further argument that the younger demographic  (mainly millennials) affected must share a lot of the blame. Why? Because they have been far too detached, some would say cool, concerning their involvement in the political system. This is especially by way of voting..

It is ok then to whine and cry about your not getting the goods,  money, or benefits you think you are due, but what are you doing about it besides kvetching?  In a recent NY Times op ed piece (Aug. 14) I read, regarding millennials:

"The Republican Party has been loosed on the land, and they get it with their trademark coolness....Their parents are in a lather of fear over Trump. The kids are -  meh....it'll pass. Of course, they still have to vote."

Ah, but WILL they?  The outlook from existing voter statistics is not encouraging. In fact, these data show seniors - not the young - make up an increasing, not decreasing share of the Americans eligible to vote. To fix ideas, according to the Census Bureau's National Population Projections, both the 50-64 and 65 and older age groups are growing as a share of all eligible voters. Further, they will continue to grow into the 2020 and 2024 election cycles.(This is assuming the millennials remain at their current  voter turnout rates.)

Most claims for the impact of young voters, like that given above, inevitably point to the millennial numbers eligible to vote. But in truth and fact, these projections mean little unless the ones specified actually show up to vote.  Again, the data can shed light here. It turns out that seniors are the most reliable voters with nearly 70 percent counted on to cast ballots as in this election. Compare that to the 18-24 year olds who've only exceeded a 40 percent turnout twice since 1996.

Pew Research reports consistently that only 10 percent of likely voters are under 30, and yet this is the age demographic most adversely affected by a plurality of federal resources being spent on seniors But what exactly do these under 30s expect when the political class feels it can write them off each year as non-serious threats? On the other hand they can't be so cavalier with seniors who will vote their asses out if they don't like their proposals.

The voting percentages are even worse in the off year elections, which are often as important as general elections. The reason is that House seats are often up for grabs and it is in the House that budgets are made and where economic winners and losers determined. In the 2010 election, for example, barely 16% of 18-24 years olds voted compared to 28 % in 2008. Similar stats applied to Hispanics. Neither group seemed to understand that to have one's interests even nominally protected it is important to show up for every election.

Since we moved back to the U.S. in 1992, Janice and I have  voted in every single election including the off years. We were especially perturbed when we diligently voted in the 2010 election and noted the numbers of young and Hispanics, blacks who stayed away - thereby allowing the Repukes to seize control and likely now retain it indefinitely thanks to the wonders of redrawing district boundaries - otherwise known in political parlance as "gerrymandering".  In 2014 it was just as bad. For example, of the 25 million Hispanics eligible to vote, only 6.8 million actually did.

Yes, it is true that most of us over 50s are "old fogeys" and not cool regarding the latest gizmos and games. We don't play Pokémon Go and regard twitter mainly as the province of the grammatically challenged. Of those of us over 65 only 25 percent own smart phones. Pretty laughable, eh? Except that when it comes to filling out those electronic voting machine ballots we are experts and in doing so understand our issues will prevail over those "too cool to vote".

If the young detest being nicked for taxes to pay for seniors' benefits (as Josh Zepps suggests)  there is a way to turn the situation around: Get your butts to the polls this November in large numbers and show the politicos once and for all you are a force with which to be reckoned.  Then, reinforce that perception by getting to the polls in large numbers for every future election - including the mid-terms.


Do that and I guarantee you that the political  parties and candidates will hear you and pay more attention to your needs, priorities than to a brash video.
Posted by Copernicus at 7:16 AM