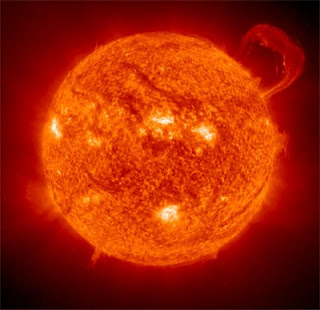 The subject of electrodynamics is critically important in understanding the energetic, spatially localized events on the Sun, such as spicules, subflares and large flares, as well as CMEs (coronal mass ejections).  This is particularly in connection with the more complex magnetohydrodynamics of solar active regions that spawn the localized events.  All electrodynamics begins with the famous equations of James Clerk Maxwell.  In general, Maxwell’s equations will be expressed in vector form:


In addition, there are three “constitutive relations” that allow any of the above vectors to be re-cast in slightly different forms:


One can also obtain the wave equations from the Maxwell differential (vector) equations. For example, take:


Take  the curl of both sides of the vector equation in H:


But by a vector identity:


Which is one of the wave equations in terms of H.


Writing all the component wave equations  out:


1.       Solar Physics formulation of  Electrodynamic Laws:
In solar applications, D and H are seldom  - if ever – used, and neither are m  and e  . For example, for  Maxwell equation (i) one is more apt to make the following changes:


This is the solar version of Ampere’s law.


The solar version of Ohm’s law is generally modified for finite conductivity, s to obtain:


However, there are special cases for which one defines a “frozen in” condition. Obtaining the particular condition depends on the laboratory, solar or space physics situation and context.
Adopting the first condition and allowing v = 0 we find:


Now, take the curl of both sides:


Also, we have from a well -known vector identity:


So the previous equation (on substitution) reduces to:


Which has the form of the standard diffusion equation:


Where D denotes the diffusion coefficient, in this case:


This has dimensions of (length) 2 divided by time. In effect, a sample length scale for consideration would have:


Such that for all times t’ < < t, the magnetic field and the plasma can be considered to move as one. This defines the term frozen in.


In solar physics the formulation is a bit more complicated and begins with re-casting Ohm’s law for current density:


Again, take the curl of both sides of the equation:


This leads to the end result:


Note that the first term on the right is exactly analogous to the plasma diffusion term derived in the lab plasma context. One can think of it in terms of resistive “leakage” or the diffusion of magnetic intensity across the conducting fluid.  The second term containing the velocity is a convective term and one can think of it in the solar context as the appropriate representation of the frozen in condition for magnetic field lines in solar plasma.


Whichever term becomes dominant will depend on the time and length scales and the magnitude of the magnetic Reynolds number  Âm   . If   Âm   >> 1 then diffusion can be ignored, otherwise it can’t. It is commonly expressed:


Where L is a typical length scale for a given solar environment, VA   is the Alfven velocity and h  is the magnetic diffusivity. The infinitely conducting condition applies for  h   -> 0.  This implies zero electrical resistance so if magnetic field lines aren’t cut, e.g. as shown here:


Then the field lines must be frozen into the plasma. Hence, the frozen-in condition, high magnetic Reynolds number and infinite conductivity all mean the same condition for solar plasma.


Ampere’s law in the solar context:


A more general form of Ampere’s relation is given by:


In S.I. units it then becomes:


The total current can also be expressed, in terms of the z-component of magnetic intensity;


Ampere’s law in its vector identity form is often written:


where ‘curl’ is a complex mathematical operation using partial derivatives for a certain coordinate system, such that for example:


For cylindrical coordinates, such as applicable to solar loops to a fair approximation. This can also be further simplified for one-dimensional modeling, cf.


which is the exact truncation value of the Lundvist Bessel function solution.


In solar physics situations, the force –free assumption dominates so that:


In general, we incorporate the “force –free” parameter (a)  into the solar version of Ampere’s law such that:


This is the mathematical starting point for the treatment of an evolving force-free field.  For a potential (current-free) field a = 0 so that Ñ X B  =  0. This is the simplest case, i.e. in which no magnetic free energy is stored.


As an example, consider using the basic 1-D curl:


From the preceding curl elements:

Whence,  for variation in one quantity:


Now, substitute the top equation into the bottom and multiply through by (-a) to get:


Note for the special case a = 0 we get what is called the current-free condition for which there is no residual free energy to be extracted.  On the other hand, for any region for which a > 0, there exists MFE to be extracted, e.g. for solar flares.


1)Take the electric field E to be in the x-direction and write out an expression for curl E.


If the length scale is L »   10 7 m  and the Alfven speed is VA  = 103   m /s, then find the magnetic Reynolds number for the region. From this assess whether the magnetic field is frozen in or not.


4) The vector potential A is often written as: B = curl A


Write out the full mathematical form for curl A in rectangular coordinates.


(b) A steady current I flows through a hollow cylinder of radius a  and is uniformly distributed around the tube. Let r be the distance from the axis of symmetry of the tube to a given point.


6) For the problem 5(a), using the same quantities, estimate the force free parameter, a.  Typical solar values of  a associated with coronal loops are of magnitude »  10 -10 m –1.   How does the value you obtained compare?