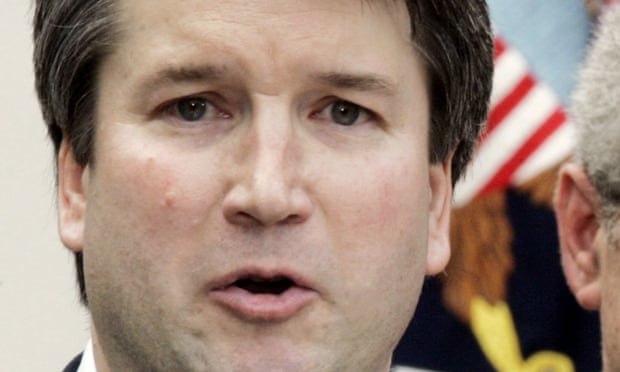 The would be rapist Brett Kavanaugh - would definitely be found to be that - if the FBI were allowed to expand its background check on him in that area now.

Back in my July 10 post, I wrote that Trump the "pussy grabber's' pick for the Supreme Court (Brett Kavanaugh)  "is not the worst pick but he still merits scrutiny."   This was also, to be sure, after breathing a sigh of relief that Amy Coney Barrett was not chosen, see e.g.

Now, in the intervening two months we've learned much more about Kavanaugh including maybe why the nation's pussy grabber-in- chief would pick him. That is, not only to protect him in case of a potential Mueller indictment or even subpoena, but well, because maybe it takes a pussy grabber to recognize a fellow would-be species member.

For me, Kavanaugh's chances as a confirmed SC nominee crashed when Christine Blasey Ford stepped forward to make her serious allegations about Kavanaugh's attempted rape some 36 years ago.  This  concerning the same guy who was part of Ken Starr's infamous team and even questioned Clinton on how much ejaculate he produced in his liaisons with Monica Lewinsky.

Now Prof. Ford says she is willing to testify about her experience, and this will happen on Monday as the eyes of the nation watch.  I am convinced, even before that drama unfolds, she will be found to  be the one with greater credibility- and at least two R-Senators' votes will be peeled off - sending Kavanaugh down to defeat. Hence, his nomination is toast, see e.g.

Kavanaugh Is Toast
Premature? I don't believe so. As Sen. Kamala Harris put it on CBS Early Show this morning, she has absolutely nothing to gain, nada, other than severe excoriation and ridicule as the Reepo dominated Senate Judiciary Committee goes after her like rabid rats  - trying to portray her as a kook or liar - like they did with Anita Hill some 27 years ago.   The difference here is that Prof. Ford needs a lot fewer Reepo Senators on her side, believing her account, than Prof. Hill needed way back when. (And let's recall that the Dems weren't much use back then either!)

Again, let's get it clear in our heads this isn't about finding Kavanaugh guilty of a criminal act given the statute of limitations has long since passed. This is about allowing a less than sterling moral character to have influence on the nation's highest court.  As blogger P.M. Carpenter put it, in the cited link above:

"Yes, he is going down, I'd wager, because Republican senators' "female constituents will not tolerate … rug-sweeping," as the Washington Post's Ruth Marcus put it. "Yes, it was high school," continued Marcus, "but if you do something bad enough in high school, it can lose you your seat on the Supreme Court."

Ford is being criticized for having a vague memory about the attempted rape incident. Yet her memory — and supporting notes from her therapist — are specific enough, concrete enough, indeed bad enough to be unforgivingly damning.."

Of course, Kavanaugh has offered a full denial, saying: “I have never done anything like what the accuser describes – to her or to anyone.”  But what the hell would you expect him to say: "Yes, I admit doing that, when I was a brash, entitled young kid, but I was running on testosterone ya know? Please gimme a break now!"

And to the point once more, I don't accept that on Monday Prof. Ford needs to provide absolute proof that Kavanaugh did what she alleges. All we need is to have enough credibility displayed that it is probable beyond a reasonable doubt he assaulted her, covering her mouth when she tried to scream and trying to remove her clothing.

Again, no one who has committed an act of violence against  a young woman  (even in high school) should be in a position to make future binding decisions about women’s lives – even if they were a reckless teenager when they did it.  Oh and even if they’re very sorry now and all of Kavanaugh's remaining record discloses he's a basically  decent guy  in other ways.

We accept that with age and maturity he availed himself of plausible rehabilitation - but still - that assault in his early years cannot be forgotten or  dismissed now. Not when so much is on the line, including the future of Roe v Wade.


True, testimony from both Ford and Kavanaugh on Monday  will not bring about perfect clarity.  It can't given that, as Sen. Harris said this morning, the FBI was not given the authority to do its background investigation on this event.  So as it stands there simply isn’t much in the way of evidence beyond Ford’s word. But I am predicting that word will be cogent and powerful when she delivers it.  And no, we already acknowledge whatever she says, Kavanaugh will not be led away in chains or handcuffs.


What’s at stake isn’t the deprivation of Kavanaugh’s life or liberty, but the privilege to hold one of the most important positions in the nation, for which good character and fair treatment of others is necessary.   We may be able to excuse the fact this guy was nominated by the nation's number one serial sexual assaulter, but we cannot have his confirmation if there's even a whiff of  extreme sexual impropriety, as there appears to be.

For all these reasons the WSJ editorial today (The '#MeToo' Ambush) is mere last minute desperation before the hangman's noose appears, as when it asks: "Why go to such lengths (i.e. taking a polygraph test) if Ms, Ford really wanted her name to stay a secret? Even this weekend she could have chosen to remain anonymous".

Yes, she could have. but she is also smart enough to  know if she did remain nameless her claims would never be taken seriously.  Nor would she have been granted a public forum to air them.  It is precisely because coming forward dramatically shows she's prepared to defend herself in an open hearing  (vs. Kavanaugh's denials) that the media's  paying any attention.   Hell, she's even prepared to face the Reepo rat brigade on Monday, despite the fact there is zero upside for her other than establishing her credibility as a victim of an attempted rape - even after 36 years. Many women in the #MeToo movement will also relate to her, of that you may be sure.

One more observation in passing: If by some fluke or perversion of process Kavanaugh does succeed in still getting confirmed look for an even larger groundswell of women adding to the blue wave tsunami coming in November.  "Bloodbath" in the words of one GOP strategist, yep and times ten.
-----------------
Update: It now appears Christine Blasey Ford  will no longer be appearing in any hearing on Monday. This follows her being terrorized by a gaggle of demented degenerates  -  Trumpies no doubt- who forced her and her family into hiding after sending her vile emails and death threats, as well as hacking her computer and impersonating her online.   I still stick with my prediction that Kavanaugh's confirmation will be sunk  - one way or another.  The proper action to have taken, if the Senate Judiciary Committee was serious at all, would have been to demand that Trump authorize an updated FBI background investigation of Kavanaugh. But, of course, that would have meant neutralizing the one guy who could set him free in a SC decision, say following a Mueller indictment or subpoena.
See also:

Republicans are fearful of a full airing of an attempted rape allegation
Posted by Copernicus at 8:40 AM