The Ultimate in Socialism: See 'Nature'! 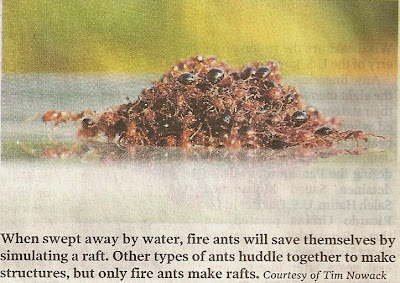 Despite all the bad mouth blabbering of anti-Socialists, it remains the system most able to secure the lives and welfare of the most people, bar none. It does this because it erects and sustains a common good in which all contribute according to their resources, thereby ensuring no one ever falls through the safety net. I saw this when I lived under the governance of Milwaukee's last Socialist Mayor Frank Zeidler, and also when I lived in the democratic socialist nation of Barbados for 20 years.

The notion circulated that 'Socialism is against human nature' and one must 'suffer to survive' is the usual type of addle-pated bilge circulated by free market fundamentalists and their lackeys in the corporate media. But tested against actual human experience the claims don't hold water. As the authors of Capitalism vs. Capitalism have noted, the Rhine economies (with large doses of socialist behavior) actually exceeded American cowboy capitalism in productivity for most of the 70s, 80s. Evidently, some ethic of redistributive sharing works.

Meanwhile, Matt Miller in his The Tyranny of Bad Ideas has pointed out that all the so-called European "welfare state" economies (e.g. Denmark, Norway, Sweden etc.) fared much better than the neo-liberal, market dominated U.S. during the recent recession. They provided the resources for their citizens to be more resilient, and also their higher formal tax structures prevented the sort of macro-scale deficiencies we still see in the U.S. where infrastructure is crumbling, public pensions are under-funded and people are being told they're "wealthier" because the stock market is higher. Think again! That higher market share value is all based on vapors. It's all variable phantom money which can just as easily plunge tomorrow (say from a new Middle East oil shock) as rise. People who base any wealth on stock share value are basing their security on financial quicksand.

In Barbados, meanwhile, the endemic socialist, communitarian structure promotes a healthy growth of the social commonweal and the belief that what is done for the benefit of one, or a few, redounds to the benefit of all. Hence, the imperatives for government subsidized low cost housing, national health insurance for all, free education through college. All of these are paid for via higher taxes overall, and a progressive scale that begins with 60% rates on the wealthiest with zero loopholes confected by an entrenched system of political bribery and lobbies.

In the U.S. capitalist system, it is more rank commercialized competition that prevails - and that engenders a perpetual creative destruction that ravages precious resources. In Barbados, with few resources, each must be maximized. There isn't the quantity to allow duplication or other squandering in wasteful competition. In the U.S., the exact opposite holds. Huge amounts of resources are yearly squandered in competitive games- that have only one or a few 'winners'. In effect, the 400 billionaries counted in this country have emerged at the expense of vast finite resources being destroyed forever. The waste, in fact, is unimaginable. Meanwhile people here without critical thinking skills or adequate education are led to believe they can also become rich, hence their ongoing antagonism against higher taxes which would actually more likely secure their futures!

In Barbados, by contrast, the bulk of people accept higher taxation as the price to have free education, easily accessible health care (without going broke), nationalized housing co-ops and a genuine prescription formulary that doesn't see them entering "donut holes" and so forth. The citizens are mature and smart enough to understand that the odds of attaining these things on their own steam are slim and none. Hence, the support of the commonweal.

Now, in nature we have a stunning example of the principle of collective security as well, in none other than the fire ants. (See photo) Evidently when these creatures are swept up by a flood, they save themselves by joining forces and connecting to each other to form a raft. They pile together, locking arms and legs and can survive for months this way, or at least until dry land is encountered. Alone, as individuals, none of them would make it. (Investigations by Nathan Mlot at the Georgia Inst. of Technology, show when individual fire ants are dropped into water they struggle, flail about then drown) Like the Bajans and other socialist-inclined humans, they have the basic sense to understand that survival of each depends on survival of all. No one of them is foolish enough to communicate to the others, "Hey, I wanna do this on my own. I ain't part of any nanny raft!"

Would that most Americans had the innate sense of these tiny insects!
Posted by Copernicus at 9:16 AM