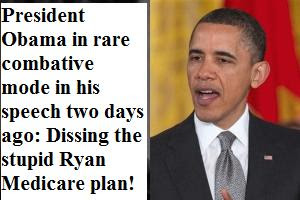 Hail to the Chief! And thank you, President Obama, for standing firm against the Republican austerity lunacy, in terms of Paul Ryan’s contemptible “plan” to fix Medicare by converting it into a voucher program that most seniors will never be able to use anyway- because no insurance company wants to compete for 30 million oldsters approaching legions of medical issues. This pseudo-plan was never intended to be serious but to stake out a position so far to the extreme Right as to try to force Obama to compromise by moving to the far center Right. Didn’t work! In his eloquent speech Obama showed how we are all in this together and that the rich carpetbaggers and tea bag funders can’t expect any more filthy lucre at the expense of the commonweal.

Thus, Obama has promised not to allow the Bush tax cuts to go forth yet another 2 years and he will veto any plan to allow it next year. He knows, and we know, that such tax breaks – especially for the rich- are simply unaffordable in this deficit environment and they certainly don’t add to economic health, nor do they create jobs -a myth the Repukes have invented but which a Financial Times analysis dispelled months ago in an independent analysis.

“The 2000s- that is the period immediately following the Bush tax cuts – were the weakest decade in U.S. postwar history for real, non-residential capital investment. Not only were the 2000s by far the weakest period but the tax cuts did not even curtail the secular slowdown in the growth of business structures. Rather the slowdown accelerated to a full decline”

Nor am I so cynical (especially with Mr. Obama’s re-election hinging on his promise) that we “need to write it down on a note and save it in the fridge to check next year” as certain columnists have remarked. No, we don’t because it is only in Mr. Obama’s political interests to follow through. Liberals, those who made up 40% or more of his voters in 2008, expect him to fully carry this out, particularly if we are in the dire deficit straits so many claim, and vast pressure is being brought to bear on Obama (e.g. from the IMF) to make good on his own solutions. In fact, many of us believe ALL the Bush tax cuts (invented by an Economic prof named Glen Hubbard for the Bushies, as the film ‘Inside Job’ makes clear) ought to be simply allowed to expire. This simple, expeditious move is the easiest way to save $3.3 trillion over the next ten years. That already is over one three-fourths of the $4 trillion in cuts Obama promised to deliver.

The other cut: $400 billion to the military is also more than welcome, as the Pentagon budget is already bloated, mainly on account of useless pork waste merely created for military-based towns and cities to exploit at the expense of everyone else. As an example, there is Colorado Springs, which now expects a wasteful $1 billion Combat Air Brigade of 120 helicopters to be built by 2013 when the Afghan adventure is supposed to wind down and out by the following year.

This also is a no –brainer since we cannot afford to remain either in Iraq or Afghanistan at the rate of $117 billion a year in “supplemental spending”. The money is there to be cut, and the Pentagon squealing like stuck pigs that it “will reduce our defense capability” is pure posturing baloney! No, it will reduce the kickbacks and subsidies to the defense contractors and their lobbyists who buy “defense” votes from our congress critters at our expense!

The $480 billion in cuts to Medicare is more problematic but I already gave a number of ways this money could arrive: mainly by cutting out Medicare advantage plans (about $130 billion over ten years) and allowing Medicare to bargain for lowest prescription drug costs like the VA, raising another $200 billion ). Raising the FICA taxes to 8.4 % as I suggested (when the current hiatus ends) can also inject revenue to help.

All of these ought to be on the table and I hope that as the details of Obama’s plan are spelled out we will see them, as opposed to burdensome elements like higher co-pays and deductibles for Medicare plans. For the bulk of seniors, most on fixed incomes, these are simply not an option – but I wouldn’t remove from the table higher copays and deductibles for the richest seniors, i.e. those with incomes in the upper quintile or over $100,000/year.

Obviously, in a severe deficit environment everyone must sacrifice. But to expect the mass of fixed income seniors to do so, given how much extra they're already paying into Medicare, is unreasonable. It is long past time to tap the ones who've been laughing to the bank, including the highball wealthy, yacht-owning fat cats, and the overstuffed defense contractors who are more like leeches!
Posted by Copernicus at 9:42 AM