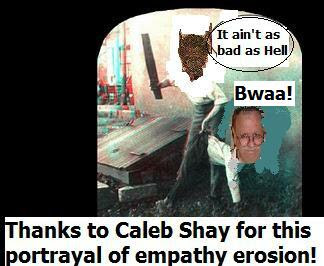 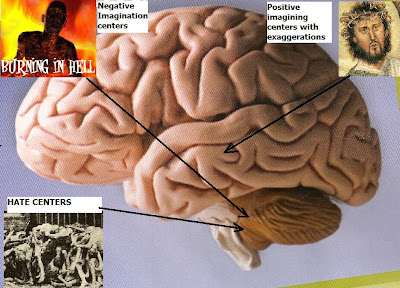 "Evil" has always been a loaded, disingenuous term precisely because of all the emotional, theological baggage it carries. Anyone these days can call anyone else "evil" but no one really knows what it means, other than 'less than human' or in league with the Devil, by the definitions of some fundie pastors.

In previous blogs I tended to define it in terms like "sin", as the gap between expectations and actions when comparing actual behavior to that imagined by the brain's higher thought centers in the neocortex. Thus, the tri-partite structure of the human brain (with significant left over reptile parts in the reticular formation) caused the language and thought centers in the neocortex to regard all behaviors emerging from the reptilian parts as "sin" or "evil". These included everything from criminal acts, to lustful ones and even rape, or stealing food from a baby after bouncing it up against a wall. To the human higher brain centers, all these acts are the work of "beasts" and hence inhuman, and "evil".

Alas, things may not be so simple, what with Simon Baron-Cohen's new work, Zero Degrees of Empathy: A New Theory of Human Cruelty. The aim of the book is to explore how it is some humans can be so incredibly cruel, and wreak havoc on so many while pouring out racial, ethnic and other hatred. What is it that turns these people to become so misshapen? Baron-Cohen, a renowned Cambridge psychologist, is well qualified to pursue this issue and answer the question of the ages: What is cruelty? What is evil? And can they be explained scientifically?

First, as an objective scientist, Cohen dislikes the term "evil" (freighted as it is with supernaturalism and emotion) as much as I do. In place he uses "empathy erosion" as an alternative. Empathy is just the capacity to feel what another person does, put oneself in his place, and hence - be able to feel his pain. For example, it would be analogous to putting oneself in the place of a poor black, say being racially mistreated or abused in the Old South, before Civil Rights came in. Putting oneself in his place, one would feel his pain and want to do anything to help him. Not doing so, and the person would either join in setting attack dogs on him, or stand by and watch while KKK'ers beat him, which is even worse.

Because empathy erosion is more measurable than the term evil (since one can gauge its presence or absence by using positron emission tomography in the region of the brain called the posterior superior temporal sulcus) then it's more useful since it's quantifiable. A typical way to do a base quantification would be to hook the person up then show him assorted photos, such as concentration camp scenes, and measure the response. If the PE radiance region area is maxed out at a certain limit, than that discloses highest empathy. If not, then empathy is absent and hence there is erosion and likely evil.

The next step to test this would be to use the sort of tests devised by psychologist Philip Zimbardo, where subjects are informed they have control of a shocking device, and are then issued orders to shock "criminal" subjects or not. (Note: the category of latter subject changes with the people assigned the shocking. For example, for a group of Christian fundies doing the shocks, those to be shocked may be atheists). Once orders are given, the shocker applies volts to the shockee. The level and frequency of the volts delivered is an indication of how much empathy - or not- he has for the person at the other end.

The Nazis were not totally insensible to how their victims were feeling, they simply didn't care! They lacked empathy and hence displayed monstrous empathy erosion. Hitler displayed some of the least empathy, and as explained in one earlier theory by Harvey Hornstein (Cruelty and Kindness: A New Look at Aggression and Altruism,1976, Prentice-Hall) his own empathy erosion probably arose from having authoritarianism imposed on him: His father Alois used to beat the boy senseless, and often for no reason. Later, devoid of empathy, Hornstein reasons Hitler took out his pain on the Jews. Tragic, but one finds such examples recurring a lot in current life, e.g. to account for why abused kids become abusers themselves.

Hornstein's theory was that the nastiness such as seen in Hitler wasn't so much due to lack of empathy but lack of altruism, when authoritarianism rules, but I'd say the two are more closely linked than not. That is, if you aren't an empathetic person, there's little chance of being an altruistic one!

Of more generic interest for the religious person, is whether empathy is anywhere in the Judaeo-Christian tradition. Indeed, it is and we have a number of Christ's words and quotes such as: "Love your neighbor as yourself". This is momentous because it defines the love of strangers not family or loved ones. The paradigm is an important one because it enjoins people to love others not out of some feelings for them, but rather an act of will. And also, by that act of will one's actions will follow suit. It is a matter of what one DOES not any warm glow in the heart.

Science fiction's Captain Kirk put it in a more basic, rudimentary form for a certain group of undeveloped aliens he was trying to help, in terms of killing off other tribes. As he put it: "We know there is the urge to kill, but we say: today we will choose not to kill!" In the same way, following along with Christ's injunction of the love for strangers, one can say: "I know I can hate, but I won't today!" What I am getting at, is that perhaps some act of will is required to thwart or limit empathy erosion!

Of particular interest to me is the way Cohen demonstrates how we all insist on treating other humans as objects. No where is this more visible than in the online world, where anyone can assume any identity and say whatever he or she wishes. Calumniate another, curse his mama and daddy, or God, it's all fair game....because,...no one ...no person...is at the other end. This is exactly how and why online bullying proliferates. Put two people one on one, however, and the utterance of the sarcasms and deprecation all but cease. Why? Well, because we're now forced to confront another living, breathing person not just a vacous virtual persona!

IN the end, lots more work needs to be done on the whole issue. Ultimately, the only way to end empathy erosion may be through the use of quantum dot interfaces and neural networks in the brain, whic raise the level of human empathy to where it could be, and perhaps decrease the total amount of "evil" in the world.
Posted by Copernicus at 12:26 PM