How Fox Viewers Are Brainwashed 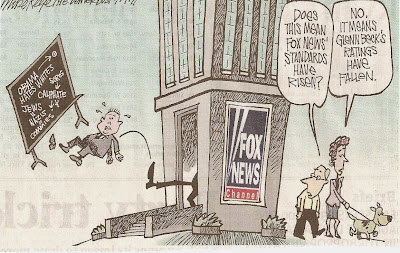 It was Adolf Hitler who once opined that if you repeat a lie often enough you will get more than enough people to believe it. This seems to be epitomized in the modern version of Reich Dept. of Propaganda: Fox News. Their role in deforming perceptions was first brought to attention some six years ago by surveys of voter perceptions (in conjunction with the Iraq war) on how many believed al Qaeda was part of Saddam's force. Nearly all those who believed this to be true (nearly 67%) were Fox News viewers, compared to barely 22% who obtained their news from other sources (e.g. CNN, ABC, NBC etc.)

How could there be such a huge disparity on an issue that really ought to have been a no-brainer, since - whatever Saddam was- he was emphatically NOT a religious Islamic fundie of the type that motivates al Qaeda! One needed only to survey and learn recent Iraqi history to know that, and to understand Saddam was a secularist who consolidated power by ensuring the two Islamic religious factions (Shiites and Sunnis) remained divided. He understood the first rule of control: divide and conquer!

Yet a preponderance of Foxites actually believed he was in league with the screwball fundie Islamics who blew up the Towers on 9-11! What this discloses is that it may only partly be true to say that Fox succeeds in brainwashing educated people. The truer fact may well be that the less well educated are attracted to Fox News. Which elicits the question: Why?

What we know from studying the art of propaganda and the ease with which it is spread, as my late German friend Kurt (formerly a Hitler Youth) pointed out, is that one must appeal to the pre-conceived beliefs of the audience. Thus, to reach his putative audience Hitler appealed to numerous lies about the Jews (already present in the culture via the Völkisch tradition)including that they were less than human, and were usually also communists or at least socialists. He also tied them to bankers, and exploiting people via high interest loans, etc., although how he got so many to buy into this is beyond me! I mean, accepting at once the Jews are in league with bankers, and also commies and socialists? Seems rather disjunctive!

A more recent example which had tied into the rancor over the budget cuts, was the role of Planned Parenthood in terms of providing abortions. What you heard from the Republican House floor over and over was the lie that more than 90% of Planned Parenthood's services were allocated to abortions. A total, bare-faced lie! The true data, shows that barely 3% were abortion services, the remaining 97% were for health screenings such as mammograms, pap smears, and even prostate exams for males. None of this was disseminated by the Rs, but when one traced the source, he located the lie most often being repeated at Fox. (I heard it while in the dentist's chair yesterday afternoon, while having two fillings put in - and promptly asked the assistant to change the channel to CNN.)

The other lie promoted by Fox during the budget skirmish was that federal funds were being used by Planned Parenthood to fund the 330,000 abortions it performed last year. But under the Title X legislative clause, they are not permitted to use one single dime of federally allocated funds for abortions! This is a detail that could be pursued anywhere, yet as we know, believers seldom do this because of the risk of having their preconceptions overturned by facts!

So where does Planned Parenthood get the money to perform abortions for the poor? Well, mainly from donations! On average, for example, I donate about $25 a year to PP for whatever use they have. This is actually a pittance, barely 10% of what many others contribute - but then I watch and limit charitable contributions as part of budgeting, and only give to those charities that have a high efficiency rating, i.e. 85% or more of the money is directed to the objectives stated.

Are Fox viewers interested in any of these details? Likely not, because most of them are also Tea baggers, and they demanded budget cuts to Planned Parenthood come hell or high water to vindicate their ideology. Not to save money!

A similar nuisance factor lie applies to Obama's birth certificate, an issue now energized further by Donald Trump putting in his two cents, including referring to Obama's step-grandmother actually claiming Obama was born in Kenya. Not mentioned, and doubtless too much fact for Fox zombies, was that this was debunked in 2008. Evidently, a repuke congress critter had made a long distance phone call to the step-grandmother in Kenya, two years before, and the connection was so bad that her reply was mistranslated. "Lost in translation" anyone? So the Foxite Birthers didn't want to hear it! Why change if they can exploit it over and over as a cheap means to try to delegitimize Obama's presidency? Analogous to what the hard Right tried to do with Clinton over Whitewater. Finally resorting to skullduggery over a cheap blow job and "perjury" to get an impeachment!

The latest sham debate has now erupted over the "certificate of live birth" which birthers insist isn't the same as a real birth certificate, while also spreading lies (as I reading in this morning's local wingnut rag) that Obama "has filed over 40 lawsuits" and "spent millions to fight it". In each case, total bollocks! In fact the sole legal case was pre-decided back in January when the Supreme Court refused to hear the suit brought by a retired USAF Colonel. A guy obviously that has too much time on his hands, but then that's the case for most of these forlorn people.

The unsettling fact, however, is that up to 51% of one of our major political parties believes this crap. That was from the most recent Gallup poll on it. This is disheartening and also disturbing, because it shows the cultural and political war now heating up will only become worse, as the brainwashed and under-educated will be faced off against the non-brainwashed and educated. Like the Civil War, it'll be father against son, and brother against brother. But maybe in the present climate that's all we can expect, and certainly until the brainwashed faction regains their sense and intelligence. At least to the point we can sit down with them and conduct an intelligent discussion!
Posted by Copernicus at 9:45 AM