Again: A Moron Who Can't Read! 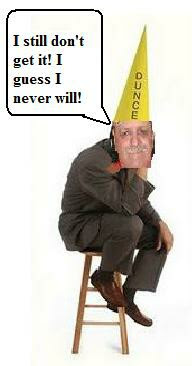 This really gets old fast, having to correct my wannabe preacher brother, who just can't seem to be able to comprehend what he reads. Is he that "duncie" to use the Bajan term, or does he maybe have dyslexia? Or, could it be he's always in such an infernal rush to put up hasty blogs, that he never checks his facts? In any case, it means - just as when we were young and I had to clean up after his messes, I now have to clean up his blogging messes - lest people be misled.

This refers to my recent blog, 'Confrontation with a Tea-bagger'. In reply to that, this bombastic brother of mine (who I'd really like to disown or exchange if I could) writes:

He ... states that people who are collecting Social Security and / or VA disability benefits can "kiss their VA benefits and Social Security disability checks goodbye," since ( according to him ) those are considered “welfare." Yeah , right , MORON! And I consider YOU a JACKASS!!

And I consider you a fulsome reep-tard, who can't read! How about them apples, BOZO BRO? But since you are such a retard let me help you out here. I will try to go slow and be nice. If you will check the blog again, you will see, from paragraph 11, the predictions made are not based on the current imminent shutdown but on the potential repercussions IF Paul Ryan's LONG TERM (10 year) budget is ever accepted. (In other words, that means it's not going to occur anytime soon). I wrote:

"if House Budget Maven Paul Ryan gets his way.... People like this Safeway worker.. won’t be able to afford a pot to piss in once Ryan’s plan is implemented. They sure as shit won’t be able to afford to buy health insurance at the age of 67 with the vouchers Ryan plans to dispense! And even if they can afford to buy insurance, no company will take them on what with the lousy medical loss ratio and no laws to insist any company take anyone!

They can also kiss their VA benefits and Social Security disability checks goodbye, since Ryan has said in no uncertain terms he intended to mandate nearly all of those be classed as “welfare” and people be made to prove they can’t earn a living otherwise. This was actually referred to in today’s Denver Post by columnist Mike Littwin in his piece ‘Paul Ryan’s Yellow Brick Road’.

Thus, at no time did I write or claim the above consequences were imminent from the current SHUTDOWN but rather if Ryan ever gets the chance to implement his "Prosperity" plan. As Littwin writes in his article (ibid.)
:

"According to economist Dean Baker's analysis of the CBO report, retirees under Ryan's plan could eventually pay as much as two-thirds of the total cost of their medical care"

This compares to roughly 33% from standard Medicare beneficiaries now, and that adds up to about $225,000 over a lifetime, or rather 20 years retired, with most money spent in the last two years. Projecting that ahead to when Ryan's plan would come onstream (in 2021) and factoring in medical inflation, that would mean nearly $550,000 for the average person on Ryan's vouchers to spend for medical care! Does Mikey the asshole idiot even read these things? If he does, can he understand what he reads? Like the Congressional Budget Office's (CBO's) own report? Of course not! He's too busy sucking up to his god, pandering to his sick followers with his racial bigotry or and pontificating that his "god's in control" even as he's incapable of explaining its inaction to dilute vast earthly disasters and inhuman crimes.

Littwin again, on the impact of a potential Ryan 10-yr. budget on the VA benefits and S.S. disability (ibid.):

"In one of the ugliest part of his report, Ryan warns that massive 'welfare reform' is needed to ensure that America's safety net does not become a hammock that lulls able-bodied citizens into lives of complacency and dependency'."

Specifically mentioned are those who claim Social Security disability as well as VA benefits, when there are NO good reasons for doing so, and the person or persons simply are able to get a doctor to write them a meal ticket. These are not my takes, but Ryan's, if only Pastor Buttbrain would exert himself to find out!

The Fool Wannabe Pastor from Miramar, Florida rambles on:

My friends , I concede that I’m no expert but I have read in several places that all a shutdown does is stop about 1/4 of federal spending. Mandatory spending (the other 75%) still goes out. That includes pay and benefits for retirees, the poor, disabled, veterans, soldiers, etc.

So what, in practical terms, would a shutdown actually mean to ordinary Americans? Would it disrupt their lives? Would they even notice? Well , Social Security payments will be fine!......Medicare is safe ... for now. Recipients will continue to receive checks for a limited time. However, if the shutdown were to stretch out for several months, payments could be cut off.

NONE of which is in question, since that isn't the point in dispute! The point in dispute has to do with what RYAN'S "Prosperity" plan budget would trigger, if ever enacted. But what this piece of shit does is what he always does: conflates two different things (Ryan's Prosperity budget, and the imminent shutdown) to make a specious case that I am all wrong, and a scare-mongering "moron" for highlighting things that will "never occur in the shutdown". Which is maybe why Mikey wants the shutdown to transpire like his tea party asshole pals- knowing that each week of shutdown will translate into $8 billion of federal money lost. Oh wait, maybe I'm giving too much knowledge credit to this pissant dope!

I hope for Mikey's sake that they don't occur, at least in his lifetime, but as I said that's contingent on whether the Repukes and their tea bagger pals are in power to force it down the population's throats. Let's hope they never are, and...in the meantime.,, Mikey the moron can avail himself of some good reading comprehension classes.
Posted by Copernicus at 3:57 PM