Confrontation with a Tea-Bagger 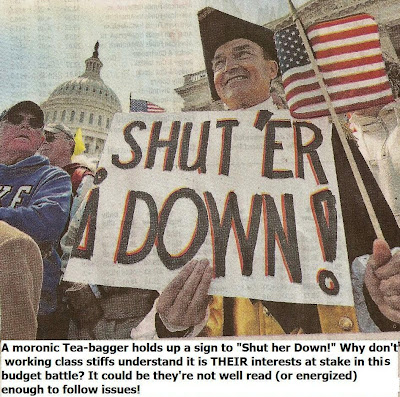 Everything began as pretty normal while paying for some groceries at the neighborhood Safeway this morning. Then, to the rear of me, I heard a woman’s voice squawking at the cashier:

“I just hope we don’t have a government shutdown, thanks to those Democrats! All they wanna do is spend, spend and spend!”

At that point, always willing to take up a fight where I hear idiocy, I turned around and glared at her. She was a Safeway worker, stocking the shelves at maybe a little over $9/hour, and when her eyes met mine she yelped:

“And who’s that lookin’ at me? What, are you a Democrat?”

“Nope”, I replied, “I’m a Socialist, your worst nightmare!”

Her eyes rolled then expanded to the size of saucers and finally bulged from their sockets as if she’d seen Satan himself. She began stammering before finally saying:

“Oh my Gawd! Oh my Gawd!...Well, I guess you’re entitled to your own politics.”

Indeed, I am. The question is: 'Why are you as a Safeway food stocker, not more in tune with how your welfare and economic interests stand to be decimated by the Tea Party and their band of half-assed idiots?' First, she’s not even remotely conscious of the fact that it’s the Tea Party that wants the shutdown, not the Dems. The latter have already offered nearly $33 billion in budget cuts for this fiscal year, the most mammoth on record. But the Tee-pees want a whole ‘enchilada’ of $61 billion! Clearly the word 'compromise' is absent from their lexicon.

Secondly, her theory- so typical of Tea-bagger mindrot, is that the problem is spending. This ninny like so many of her cohort, don’t grasp that it takes money- lots of it- to man air traffic control towers across the nation so that planes they take don’t collide each day, and also money to man food inspections – so the next Brussels sprout or peanut butter you consume doesn’t give you E. Coli.

Then there are the inspections of our nuclear power plants, as well as the distribution of food via the federal school lunch program (which serves the kids of many of these low salary workers who otherwise would barely have a cracker to eat in the morning). Finally, there is the business of the CDC, to protect us against the latest diseases, and the NIH – to perform research on the up and coming ones (like the NDM-1 superbug strain now spreading). Oh, and let’s not forget Medicare, Social Security, VA benefits and Medicaid – a trio which helps to keep more than 79 million of our fellows from poverty. Or….do these people want all those millions to just drop dead?

Well, if House Budget Maven Paul Ryan gets his way, that’s about what will happen. People like this Safeway worker? They won’t be able to afford a pot to piss in once Ryan’s plan is implemented. They sure as shit won’t be able to afford to buy health insurance at the age of 67 with the vouchers Ryan plans to dispense! And even if they can afford to buy insurance, no company will take them on what with the lousy medical loss ratio and no laws to insist any company take anyone!

They can also kiss their VA benefits and Social Security disability checks goodbye, since Ryan has said in no uncertain terms he intended to mandate nearly all of those be classed as “welfare” and people be made to prove they can’t earn a living otherwise. This was actually referred to in today’s Denver Post by columnist Mike Littwin in his piece ‘Paul Ryan’s Yellow Brick Road’.

So why isn’t this woman remotely aware of the fact that the Tea Party, who back Ryan, are totally against HER interests? Most likely because she and 99% of her Fox-watching cohort are largely under-educated, don’t read newspapers, and don’t follow the skein of deep politics at work in this country, where most of the message is massaged as propaganda to manipulate people like her to vote against their own interests, while rich puppet masters like the Koch brothers pull the strings!

So, just as the millionaires are threatened with the possibility of paying higher taxes (which they SHOULD pay) their orders go out to lobbyists and back door interest groups to stoke up the fear fires. Shout out the warning about “Liberals” and “Socialists” taking over the country (never mind that together they comprise barely 18% of the populace), and remind the working class of the Libs “godless ways” and trot out every fear factor you can think of – from aborting only black babies, to taking over the churches, or distributing sexy porn movies to Sex Ed classes! Anything to make the working stiffs wince, vomit and vote against their interests and for the rich.

Will they ever learn to see how they’re being gamed? I’d like to believe so, but so far the indicators aren’t too enticing. But at least the next time this teepee worker is tempted to spout off, assuming everyone around follows her bull, she will think before opening her uninformed yap. Maybe she and her ilk need to read Thomas Franks' What's the Matter with Kansas? to gain a semblance of a clue of how much they're all being used as dupes....by the likes of the Koch brothers!
Posted by Copernicus at 9:17 AM