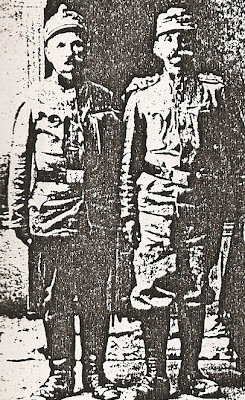 Well on top of the genealogical discovery of a bible-punching great great grandfather, I now have to add the find of a great grandfather (mother's side) who actually served in WWI under the Austro-Hungarian empire. As readers may know, World War I was triggered when the Archduke Franz Ferdinand was assassinated in June, 1914. The attached image from 1915 shows great grandfather Anton (left) with a friend, about a year after hostilities with Serbia had gotten underway. Of course, the U.S. still wasn't involved.

Ironically, as I learned on perusing old family documents, many compiled by my cousin Barbara, Anton might not have had to fight at all (he eventually attained a rank analogous to captain in the Austro-Hungarian Army). Evidently, a baker by trade, he set out to find his fortune in America in 1905. He came alone (his wife Magdalen remained behind) and found immediate employment in Pennsylvania. While there he regularly sent money home and also managed to save enough for his wife's passage.

Unfortunately, being a staunch Catholic, Magdalen realized the passage couldn't be made because the money wasn't adequate for her and her children. (Joseph, my grandfather, and sister Julia). Thus, Magdalen refused to leave her children, and so Anton returned home in 1907. Meanwhile, during Anton's absence, Joseph had been keeping up the bakery from the age of eight. He'd start the bakery oven at midnight and then help his mother with the baking of the rolls and bread until 5:00 a.m. After they were ready, he would deliver them across five to six square miles carrying them on his back. Only when he reached the age of 12 did Anton permit him to use the wagon and team of horses to deliver the baked goods.

In the course of doing business with the neighboring towspeople, Joseph learned their languages, including German, Hungarian, Bohemian, Russian(Serbian) and Polish.

As the threat of war heated up between Austria -Hungary and Serbia, Anton encouraged Joseph to leave the homeland, to avoid conscription into the Hungarian Army. Thus, Joseph - under Anton's watchful eyes- left Cabuna, Croatia at the age of 15, on March 19, 1914 - buying a ticket in Zabreb, then traveling by train to a port in Antwerp, Belgium (on the vessel Kroonland) which then docked at Ellis Island, New York, on Good Friday, April 12, 1914. This was barely two months before the trigger to the first World War: with the assassination of the heir to the Austro-Hungarian throne, the Archduke Franz Ferdinand on June 28, 1914, at the hands of Gavrilo Princip, a Serbian nationalist. This resulted in Austria-Hungary's declaration of war against the Kingdom of Serbia.

Anton was ensnared in it, but fortunately, his son Joseph escaped, and found lodging with his father's brother (his Uncle Wenzel) in Milwaukee. The rest, as they say, is history.
Posted by Copernicus at 10:28 AM