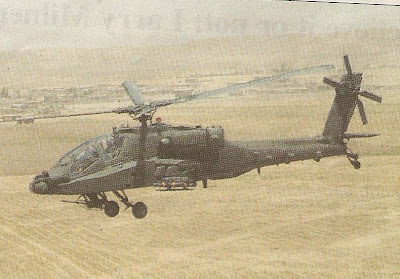 It is absolutely effing incredible, that in an era when the whiny -ass Tea- baggers of the nation demand stringent budget cutting, they are overlooking one of the biggest boondoggles of them all: a planned 'Combat air brigade' for Fort Carson, Colorado, which is now projected to run nearly $1 billion, if not over. At least $750 million is earmarked for construction costs, which will be needed to house 2,700 additional troops and families.

But this isn't all of it. In addition to construction spending, the Army will need to buy new aircraft for the CAB. Apaches (see image) will run $35 million each, Blackhawks - $19 million each, and Chinooks, $29 million each. Figure out the additional costs for 100 choppers and it's close to $250 million, making for a total of $1 billion and that's assuming no cost overruns (most likely with the new base construction).

Is this bullshit CAB really really needed? Hardly! Well, let me rephrase that: other than as a massive pork barrel spending sop for one hyper-conservative town already overflowing with retired military nutbags (including one that recently tried to impersonate President Obama to get his Selective Service records, and Social Security number- and ought to have his ass tossed in the brig for treason!) See also:


Anyway, a reality check is provided by the Army's own 2007 Environmental Assessment for high altitude training in forest land states like Colorado. The report noted:

"There are no sites either on Fort Carson or Pinon Canyon Maneuver Site that meet requirements in terms for this training in terms of elevation and associated geography".

Indeed, it is a well known fact that Apache choppers like the one shown usally operate over desert terrain not mountains. Hence, the justification for this CAB is based on pure unadulterated bullshit.

Why is it so crucial then to train in mountains or mountainous areas? According to one Army investigator, following a report made after a 2010 Apache crash west of Fort Carson at 12,000 feet, it is NOT! That investigator noted:

"There are few foreseeable mission requirements in the theater of Afghanistan that would require Army reconnaissance and attack rotary wing aircraft to land to pinnacles at high altitudes- even in the case of an emergency."

In other words, it's all hogwash! This is merely a put up PR job to attempt to defend an added monstrous "defense" expense and pork that isn't defensible.

Again, this is not about "attacking the military" here but rather attacking spending in an era of massive deficits and demands for cuts. A spending that simply cannot be justified by any form of logic, or practical reasons - not when two Army reports expose the basis as spurious. Moreover let me put this bluntly: any tea-bagger that demands stringent budget cutting but takes transparent military boondoggles and waste(pork) off the table - is a fucking hypocrite! Let me repeat: A FUCKING hypocrite!

It is time this CAB plug be pulled, and right now! $1 billion to this farce is $1 billion too much!
Posted by Copernicus at 2:27 PM