Tracking the Origins of the "Satan" Myth 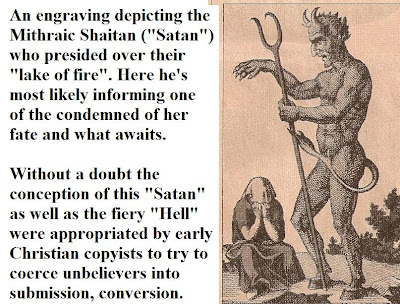 Having seen in the previous blog how the Hell myth was engendered, and then copied by Christian scribes from ancient pagan sources, it now makes sense to examine how "Satan" got his start. Ever since Dante Allegheiri gave life to "Satan" in his renowned Inferno, the 2nd Book of The Divine Comedy, theologians and philosophers have been captivated in trying to track down how or where the original conception of "Satan" arose. These efforts have spanned centuries and many different traditions and ethnicities, with some modern philosophical expositions coming from those like the popular philosopher, Joseph Campbell (now deceased) in the last chapter of his The Power of Myth.

What we can infer, is that the idea of an eternal punishment preceded any Christian theology on it by at least one thousand years. Generally, the concepts diverged as one of two forms: Tartarus or the ancient Greek version of "Hell" (see previous blog) and the fiery Mithraic version. The last is putatively the obvious version appropriated for use by Christianity and this likely was adopted at the Second Council of Constantinople by which time Mithraism was in retreat even in the Roman Empire. (Recall here, Emperor Constantine's 'Edict of Milan" which essentially made Christianity the offical state religion of the empire, though married to some traditional forms of the Roman Sol Invictus cult).

Some historical basics before decribing the Mithraic Shaitan: In the Graeco-Persian manifestation of Mithra (alt. Mithras) he was born of a virgin on the winter solstice, Dec. 25th. The leader of the cult was called a pope and ruled from a mithraeum. The Mithraists consumed a special meal (‘Myazda’) completely analogous to the Catholic Eucharist. And just like their Christian decedents, they celebrated the atoning death of a Savior (who according to Ized 28 was crucified). In addition, those who did not partake of the body and blood of Mithra-Mithras were condemned to “Hell’, designated as a “lake of fire”. Most authorities, and perhaps the best text for this is 'The Origin Of Mithraic Mysteries: Cosmology and Salvation in the Ancient World', Oxford Univ. Press, 1989, articulated this particular concept. As noted therein, the "lake of fire" description most likely arose from the perception of flowing lava (such as after a volcanic eruption) forming a pit or "burning lake" which is quite reasonable if anyone has gone near to an actual volcano, say after an eruption. Such lava "lakes" are fierce enough to melt lead or iron and would certainly be a horrific temporary "hell" for a human, never mind an "eternity"!

The Mithraic Shaitan (see graphic) meanwhile presided over the dispatch of incoming culprits to the "lake". He generally informed them first of their transgressions, then enlisted lesser demons or agents to carry them into it where they'd be kept forever. The author doesn't go into tremendous detail on his nature but it appears to be a given this wasn't needed. It was left to later imaginative Christian "Demon theorists" to expatiate at length on the Christian carryover (see e.g. The History of the Devil’, by Dr. Paul Carus, as well as The Compendium Maleficarum of the Ambrosian monk Francesco Guazzo.)

What might be the earliest period or epoch for Shaitan's emergence? A clue is to track the time line for the texts based on the pagan epistles known as the Izeds (28 in number) appearing in the Zendavesta. The Zendavesta, literally "text and comment," was the doctrine of Zoroaster (Zarathrustra), comprised in eight parts, written at different periods, but of which the earliest have been assigned to the date of B.C. 1200-1000. In its present form it was collected by Ardeshir, the founder of the Sassanian dynasty, from oral tradition, at the time when he re-established the ancient religion of Persia. In effect, the concept of a Shaitan presiding over a fiery "Hell" (Lake of fire) could have well existed since 1200 B.C. or more than 1,200 years before Christ was claimed to refer to it.
Posted by Copernicus at 8:54 AM