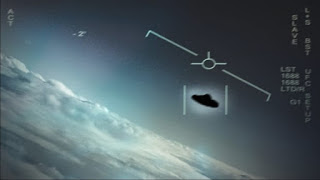 Object locked onto by Navy pilot.  Neil Tyson wants us to believe this UFO is a result of a "glitch" in the aircraft's imaging system. 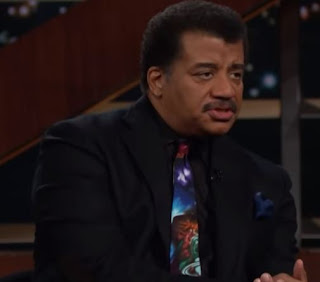 Tyson, trying  to convince Bill Maher that Military pilots'  recorded UFOs are a result of 'glitches' in aircraft  imaging systems.

The problem with overthinking a phenomenon, no matter how bright you may be, is that it usually doesn't end well - say if you're on the air.  Because of your over-active neurons you will either shoot yourself in the foot, put said foot in mouth - or just plain sound condescending, dumb or both.  Such was the case with Neil deGrasse Tyson Friday night, while discussing the military pilots' recorded sightings of UFOs (now called UAPs or unidentified aerial phenomena).

Tyson is a skeptic and prides himself on being a rational one.  In this case, however,  his rationalism devolved into cherry picking a series of strawman objections to the Navy pilots' recordings being taken at face value: i.e.  intelligently controlled craft able to aerodynamically out maneuver our own.   This tactic ultimately ended up with the astrophysics popularizer having proverbial egg on his face.

Tyson began by telling Maher: "We need to come at this from another direction, and ask the question: Why do they only reveal themselves to Navy pilots?  Why don't any ever show up in the 6 billion odd high resolution color photos human beings are uploading to the internet every day."

At which point one had to wonder if Tyson's IQ even attained triple digits, and he's been outperforming his native abilities. Of course, if such craft operate in the skies they will most likely be seen by those who monitor the skies - even in the case of national defense or training exercises. Enter the Navy pilots.  Spend enough concentrated time with attention on the skies, in other words, and you are bound at some point to see such objects - Navy pilot or not.

As for why they don't show up in the billions of high res photos uploaded to the net each day, that's what we call a "doh"(or dope) question.  It's because humans are inherently navel gazers more preoccupied with their own lives,  events (birthdays, weddings, graduations etc.) than what's going on in the skies.  Maher came close to destroying this bunkum by shooting back: "Because they're not in fucking space where the aliens are!"

Leading to Tyson's  biggest gaffe query or misstep, likely because he'd already wrapped himself in such condescending smugness a fall was imminent, to wit: "And why is the best image of an alien craft a fuzzy, monochromatic tic tac on a display screen?"

This even brought a groan from Janice, and a frustrated: "Come on, Neil, don't be dumb! They were also seen visually without any instruments!"   What happened to technicolor UFOs, or at least multi-color?     Well, sorry, Neal, but this is the best you're gonna get with a gun metal gray object.  Deal with it.

But the example highlights the desperation of the ultra skeptic provincialists  -  like Tyson-  trying to escape what's staring them in the face. But wait, he's not done yet scooping the egg onto his face.  This occurred after Maher pointed out the objects were observed by deeply serious people, namely the pilots - with thousands of hours of experience in recognizing -identifying the sundry objects, craft sharing air space.  But Tyson attempted to downplay this experience factor by interjecting an even dumber objection:

"That doesn't matter! Are you human?  Then you are equally susceptible to delusion and to bias."

Uh, no, dummy.  Not if you are a trained Navy pilot who can't afford to be mistaking unknown craft, or aviation threats, with weather balloons, drones or Venus. Or delusions!  Say like Billy Bob Cornpone might.  The very fact Tyson found it necessary to diminish the superior training level of such pilots showed  - as Janice observed "He has a bee in his  bonnet about these things."

Perhaps realizing how dumb that retort sounded, Tyson next resorted to the skeptic fallback position, that there is a "glitch" in the imaging system.

In this case, we're then treated to this predictable response, which one supposes is Tyson's core 'theory' of the case:

"Every piece of software I've ever seen has glitches. Every time every one. So I'm saying the imaging system they're using has glitches.  And they'll say 'we checked it and it doesn't have glitches' and I'll say okay so you are then so sure it doesn't have glitches that you'll now say we're being visited by intelligent aliens from another planet."

But if one plays back the 60 Minutes segment with the pilots, none are saying that we are being visited by aliens.  They are simply saying they cannot explain the aerodynamic behavior observed in any prosaic way.   Tyson's glitch nonsense doesn't come up - and CBS' Bill Whitaker doesn't even ask it -- because it's too stupid to be considered.   I mean, these are multi-million dollar fighter jets using this equipment and tested already in all kinds of  simulations and real time, real world conditions.  For cripes sakes, does Tyson really think a glitched imaging system is going to be employed by Navy jets and the Pentagon?    And again, as the pilots interviewed pointed out, the radical dynamical behavior was observed independently - not just with the image and radar system.  Those merely confirmed the objects locked onto were real.

The  point is that Tyson's  conclusion is patent bunkum,  i..e.  "So you're not going to accept there are glitches so you can now say we're being visited by intelligent aliens from another planet with unknown physics.  That's a huge leap."

Again, the absence of glitches in the imaging system does not say "there are intelligent aliens visiting from another planet", it says that the video-captured objects - whatever they are- are real and their aerodynamic behavior is genuine. Now, if that leads one to conclude an extraterrestrial source, so be it. But none of the pilots interviewed by Whitaker said that.

Tyson's problem is that his denial runs so strong- demonstrated in his succession of irrelevant straw man objections -  that he ends up as a pseudo skeptic.   The real issue he dodges is the extraordinary behavior of the objects themselves, not in the supposed "image glitches",  the monochromatic color of tic tacs, or why billions don't upload high res images of them to the net.   His responses should serve as an object lesson for real science popularizers about the dangers of being too glib, too smug in what one thinks one knows.  Suffice it to say it was not one of Neil Tyson's best performances.

Posted by Copernicus at 5:02 AM