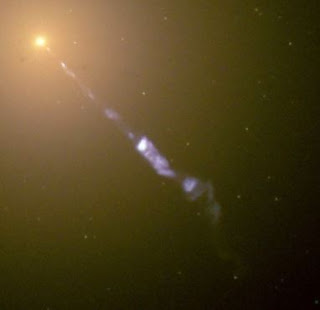 Jet from M87 galaxy in Virgo - due to black hole

M87 is a giant elliptical galaxy containing trillions of stars at the center of the Virgo supercluster. A jet of hot plasma emanates at relativistic speeds from the galaxy’s core (see accompanying image). In 1977, inspired by Roger Penrose's theory of black hole formation, Roger Blandford and Roman Znajek proposed a way by which a rotating black hole could extract energy from surrounding plasma and convert it into a jet. Indeed, they suggested that in general such jets emerge as the outflow from a black hole's accretion disk - the region in which magnetized gas swirls around the event horizon.  In effect, the spinning black hole acts like a magnetized conductor whose rotational energy is extracted and expelled in the form of jets.  This has to do with the Kerr black hole, defined entirely by its mass and angular momentum.  See e.g.

Can the Blandford–Znajek mechanism account for M87’s jet, given the values for field strength, temperature, and density inferred from the recent Event Horizon Telescope (EHT)  observations?  This is a question foremost on astrophysicist's minds as they examine the data.  In particular, tracing the dynamics of accretion and outflow processes requires directly observing the immediate surroundings  of a black hole.  The problem? The small scale structure of the event horizon of the black hole has roughly the equivalent angular size as an apple on the Moon as seen from Earth.

We know from advanced space physics that magnetic fields pervade the plasma that envelops black holes. As the plasma’s electrons gyrate round the field lines, they lose energy via what's called  synchrotron radiation. The radiation is linearly polarized in the plane of the gyration. As the radiation makes its way through the plasma along the observer’s line of sight, another electromagnetic process, Faraday rotation, comes into play. If all the magnetic field lines around the M87 galaxy were neatly aligned, the radiation’s polarization would be strong and rotated by the same amount. But if instead the field lines were a tangled mess, whatever polarization the radiation originally had would be wiped out.

As resolved and mapped by EHT, the fractional polarization of the radiation from M87’s event horizon is at most 20%. Additional ALMA (large millimeter array) radio observations-   which average the polarization over a larger region-   yield an upper limit of around 3%. The observed pattern is consistent with poloidal magnetic field—that is, a field with north and south poles like Earth’s. Such a field could be generated by plasma orbiting the black hole in an accretion disk.

In particular, the observed polarization is consistent with what astrophysicists call a magnetically arrested disk (MAD) scenario. As the magnetic field builds up near the event horizon, it becomes so intense that it pushes back against the plasma being drawn into the black hole. The scenario forces the magnetic fields to orient themselves perpendicular to the accretion disk (along the north and south poles of the spinning black hole), and this is what gives the polarized image the “twist.”

One particular collaboration has created a set of jet models and then simulated how their associated radiation would appear if observed by EHT at the distance of M87—4900 light-years. The model that best matched the observations validated an assumption that Blandford and Znajek had made: that magnetic fields in the vicinity of the event horizon are dynamically important for jet production. (See eg. K. Akiyama et al., Event Horizon Telescope collaboration, Astrophys. J. Lett. 910, L13, 2021.)

Streaming out from the center of the galaxy M87 like a cosmic searchlight is a black-hole-powered jet of electrons and other sub-atomic particles traveling at nearly the speed of light. In this NASA Hubble Space Telescope image (top of post) , the blue of the jet contrasts with the yellow glow from the combined light of billions of unseen stars and the yellow, point-like globular clusters that make up this galaxy.

At first glance, M87 (also known as NGC 4486) appears to be an ordinary giant elliptical galaxy; one of many ellipticals in the nearby Virgo cluster of galaxies. However, as early as 1918, astronomer H.D. Curtis noted a "curious straight ray" protruding from M87. In the 1950s when the field of radio was blossoming, one of the brightest radio sources in the sky, Virgo A, was discovered to be associated with M87 and its jet.

Now, thanks to the EHT project and the achievement of Earth-sized baselines - to achieve the highest angular resolution in ground-based astronomy - we've been able to observe the supermassive black hole in M87 at the scale of the event horizon.   Most impressive is that we now have a plausible explanation for the jets appearing in M87 and other supermassive black-hole bearing galaxies.