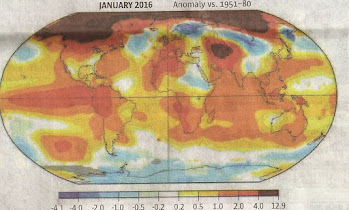 The new report on Earth's increasing energy imbalance ought to shake even the most jaded to the core.  We are talking here of the amount of heat Earth traps- which has roughly doubled since 2005, contributing to more rapidly warming oceans, air and land, according to new research from NASA and the National Oceanic and Atmospheric Administration.

The study, which was published this week in the journal Geophysical Research Letters, has noted that fluctuations in the climate may have played a significant role in the acceleration, including a strong El Niño event from 2014 to 2016, which led to unusually warm waters. See e.g.

The  Pacific Decadal Oscillation -  a longer-term, El Niño-like fluctuation-   also switched from a “cool” phase to a “warm” phase. around 2014.

Earth takes in about 240 watts per square meter of energy from the Sun. At the beginning of the study period, in 2005, it was radiating back approximately 239.5 of those watts — creating a positive imbalance of about half a watt. By the end, in 2019, that gap had nearly doubled to about 1 full watt per square meter.

That doesn't sound like much to fret about but the energy increase is equivalent to four detonations per second of the atomic bomb dropped on Hiroshima.    This according to Gregory Johnson, an oceanographer for NOAA’s Pacific Marine Environmental Laboratory and co-author of the study. For those who want a more prosaic comparison, it's like every person on Earth using 20 electric tea kettles at once.

Oceans absorb most of that heat, about 90 percent, but now even they are reaching a maximal absorption level. As the seas rise, they are also warming at a pace unanticipated as recently as ten years ago. A warmer ocean means more powerful storms, and die-offs of marine life, but it also suggests that the planet is more sensitive to increased carbon dioxide emissions than previously thought.

The closest geological epoch to what we're seeing today is the Pliocene era, 4.1 million to 4.5 million years ago.   By analyzing ice cores and ocean sediments, researchers have determined that temperatures during that time were nearly 4 degrees Celsius (7 degrees Fahrenheit) higher than in the modern preindustrial era and that sea levels were about 78 feet higher than today.   When  current researchers compared satellite data to temperature readings from a system of ocean sensors, they found a similar pattern and an agreement between the data sets that confirmed the extent of energy imbalance.

Still, some scientists aren't yet convinced the trend for serious increase in energy imbalance is established. Kevin Trenberth, a distinguished scholar at the National Center of Atmospheric Research, said the results of the study aren’t particularly surprising given these climactic variations. But 15 years is not enough time to establish a trend, he said.   He added:

“Certainly you’d like to see another 10 years or something like that to see how this behaves.  The question is: Will this continue?”

Johnson said that also is unclear, adding in a remark to The Washington  Post that the imbalance "could shrink in some years compared to others", but the general trajectory appears to be upward, especially if the Pacific Decadal Oscillation stays in a warm phase.

Johnson noted that tracking Earth’s energy imbalance will also help scientists better understand climate change.   Other common metrics, such as air temperature, only catch a fraction of the effect of the Sun’s heat. By contrast, the imbalance measures “the full amount of heat that goes into the climate system.”

Prof. Trenberth added that irrespective of the magnitude or reasons for the accelerated imbalance, the fact that it is positive is crucial.  Noting:

“It’s the sign that matters here.  The fact that it’s positive means that global heating is happening.”

That extra heat, especially in the oceans, will mean more intense hurricanes and marine heat waves.   In the immortal words of another researcher, Norman Loeb:

“I hope the heating doesn’t keep going at this clip."

You and I both, professor!

Posted by Copernicus at 8:40 AM