NFTs (Non-Fungible Tokens): Another Way For The Super Wealthy To Waste Money 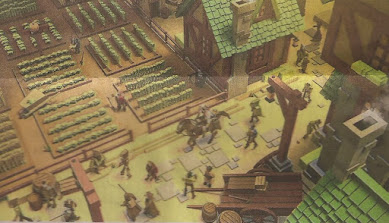 Virtual real estate in the role-playing game Mirandus, for which some people are willing topay seven figures of REAL money

According to a recent  (March 22) WSJ Business Exchange piece, the first tweet ever written by Twitter CEO Jack Dorsey has sold for $2.9 million.  That is, $2.9 million - enough to buy a decent home in Aspen, paid for a silly pile of words. Excuse me: a "digital certificate" showing a truncated set of words.  It must be nice to have so much damned money to just blow on bollocks.   According to the piece, the lucky bonehead with money to burn is Sina Estavi, "Bridge Oracle CEO, technically owns a digital certificate of the tweet."

Get that?  A "digital certificate"-  not even the actual hands on, tangible item.   Is it truly possible for people to be this ridiculous?  Well, uh yeah, when some other moron actually ended up paying millions for a vacuum painting of 'nothingness'.  In a world where too much money is "easy come, easy go"  and fantasies abound on making it rich with digital doo dads and virtual property (as well as cryptocurrency)  you can see where this is going.

Still, Estavi clearly believes his idiotic purchase requres some justification which is why he actually compared Dorsey's first tweet to the Mona Lisa, e.g.:

Uh no, Roscoe.  The Mona Lisa painting is real, a tangible entity, not some digital facsimile of it.  No way in hell will any sane person applaud your dumb purchase even 100 years from now.  Unless the whole world -  if it's still around  -  has gone batshit nuts.   That is not a huge imagining given we already have millions who believe demons are controlling a good part of our government - and perform child cannibalism.

But this Dorsey tweet example is but one minor taste of the madness that is "digital collectibles".    In the old days, we had old school collectibles and just about every manjack could recognize value when presented with the collectible, whether a TOPPS 1954 Henry Aaron baseball card, an 1878 Morgan silver dollar, or a Marilyn Monroe postage stamp.   In each case one had the choice of purchasing the collectible, or better yet, trading for it - assuming you had something of equal value.

In the most recent (June) AARP Bulletin,  readers - most of whom are baby boomers like me -   had to be reminded of the difference between old line collectibles like ball cards and the newfangled non-material NFTs. The subtext warning  was to avoid becoming another "lemming"  diving off the cliff  of hype in pursuit of dubious digital riches.  Along with the clear warning:

"Know exactly what you are buying before digging into thousands of dollars of your nest egg."

There was then the timely reminder given from an NFT broker of such goods:

"Let's remember that the new digital collectibles we call non-fungible tokens are assigned values just like the baseball cards and coins of old."

Of 'old'?  Hey, Bud,  I still have my 1950s Aaron (Milwaukee Braves cards) as well as many other sports cards obtained in trade deals with one or more of my now deceased brothers.  And know what?  I can retrieve them any time I want and examine them in my hands as actual 3 D objects, as opposed to some virtual entity in the 'cloud' or wherever. Yes, these cards were assigned 'book values' and books (e.g. 'Beckett's Official 1992 Price Guide') were even published with the values of cards for various conditions, e.g. mint, near mint, 'good',   'average' and poor.   Apart from the grade one always knew he was buying a real object, not a digital facsimile.

In a second WSJ article on NFTs, appearing on the same page (B4) as the first, we also learn:

The reason is that the whole value associated with the given NFT collectible must be 100% unique. No other one like it, which is how it derives its worth. And gets a lunatic in southeast Asia - say - to cough up $2.9 million for a tweet (as a digital 'certificate').   We are then informed that in March a 'digital collage "sold in Christie's for $69.3 million."  Give me a a break!

But hold on.  That's just the beginning of the madness.  If people are loony enough - and have enough money to blow - they can actually buy "real estate"  in a virtual - digital game world.  Like that shown in the graphic above (from the role-playing game, Mirandus).

Why shell out $10 million or more for a digital deed to such a piece of game real estate?  We are informed ('NFTs Spark A Digital Land Grab in Videogames',  March 22, p. B4):

"The real estate will appreciate as more players join the game and scarce land is sold to other players who may require the plots for certain tasks and missions."

Again, let's get this straight. The fool is prepared to cough up maybe $10 million in real money  for a virtual piece of land in a digital game.   And besides, "digital land purchases have brought in millions of dollars."   Well,  as P.T. Barnum once put it, "there's a sucker born every minute".

In more subdued terms:  NFT investors seem to be relying on the "greater fool theory" — all you need to profit from an investment is to find someone willing to buy the asset at an even higher price.

Pardon me, but I will stick to real, hands-on collectibles in coins, vintage cards, stamps and the like.  I will leave the digital forms to those like Sina Estavi who are deluded enough to believe a CEO's tweet is like the actual Mona Lisa painting.

Posted by Copernicus at 6:10 AM