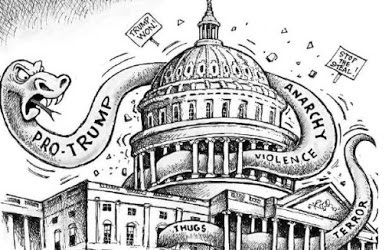 The news yesterday that House Speaker Nancy Pelosi (D., Calif.) will establish a select committee to investigate Jan. 6 assault on the U.S. Capitol,  is more than welcome.  It is also absolutely essential after Senate Republicans blocked an earlier effort to establish a bipartisan independent commission.

The committee will investigate and report on the facts and the causes of the attack by supporters of former President Donald Trump, and will make recommendations for the prevention of any future attacks, Mrs. Pelosi said.

The speaker had signaled her intention to form a select committee earlier this week during a meeting with the House Democratic Steering and Policy Committee, according to people familiar with the matter. But the formal announcement didn’t come until Thursday morning.

Recall barely 6 months ago I warned of the dangers of the January 6th insurrection being "lost" in the news cycle.  In fact, over this time interval - with every move of the Reeps and their media allies (at FOX, OAN)- it is more a case of forcing those events into a memory hole.   Clearly the Reepos know the jig is up and there is no putting the violence and sedition on Antifa or Black Lives Matter - despite what certain Trumpers tried to blabber on the last '60 Minutes' episode. ("Why would the Oath Keepers do that when they vowed to defend the Constitution?")  Well, because now we know they are traitors at heart, what with a recent Oathkeeper's testimony in a D.C. court.

But this is part of the reason we need to get at the bottom of events that day, including who profited from them,  to what degree military or cops were involved, and that includes how many are white supremacists.  A series of recent WSJ letters to the editor also showed the need for such an investigative committee, i.e. some of the comments:

"More Americans had been chilled and horrified by months of wanton violence, and burning of businesses, after the George Floyd incident.  Besides a large protest is a much more accurate term than the politically charged insurrection." -  Michael S. Beates

"Mayhem at the Capitol was disturbing but the insurrectionists weren't about to bring down the government....Despite all the Democratic party hyperventilation the only person shot and killed was a protester -  an unarmed woman who was an Air Force veteran."  Dana Davis

How letter writer Ferrell could blab that Americans "have processed the events"  and are  done with them, makes me wonder what planet he's living on.  How could they be "done" with them when we don't even know the full scope of what went on, the timelines,  and the level of conspiracy i.e. between the quasi military outfits like the Oathkeepers and Three Percenters etc.?

Michael S. Beates is another piece of shoddy work trying to compare last summer's protests to the insurrection.

"For starters, the Capitol is not a liquor store. When a mob breaks the Capitol buildings windows it is not criminal mischief but an assault on democracy itself and decency. That's the point, violence must always be understood in context."

"Any violence at all that fights injustice is violence with meaning behind it, born of the failure of other means and methods redress. Violence that means to spread democracy and justice and encourage fairness and the equal application of the rule of law has nothing at all in common with the wanton, anti-democratic riot of January 6th, fueled by Donald Trump and QAnon  conspiracy theories of an election that was stolen."

Thus January 6th was a violent insurrection in support of a failed coup attempt - which strikes at the very core of our nation - an existential violence threatening the very constitutional fabric.  This is exactly  why it can't go without being punished including convicting Trump.   As Velshi explained:

"To compare the underlying goals of protests about injustice - that gave sometimes become violent at their edges- to the anti-democratic seige with violent aims at its core -  fueled by lies and conspiracy theories, is simply to ignore history."

Walking around in the Capitol and the House chambers and offices with plastic zip ties, generally used by crooks to bind victims, is not "rioting"   or "protesting".  Neither is calling for the assassination of Nancy Pelosi, or parading with Confederate flags, and setting up a real gallows to hang Mike Pence.   Indeed, the very act of breaking into the building - e.g. by smashing windows and doors-  places the invaders as just that, no better than common felons breaking and entering a property. But the invasion and desecration of the Capitol makes it insurrection, an act of domestic terrorism.  Not a mere "protest".

Letter writer Dana Davis finishes off the daft opinions of the WSJ  'Three stooges' - claiming the insurrectionists "weren't about to bring down the government.'  But maybe he was too dense or too damned blind to see the working gallows to hang Pence or the Molotov cocktails trucked in by one Alabama "protester".  As for Ashli Babbit -  the "unarmed woman" - let's be clear she was no innocent.  She was an insurrectionist lawbreaker and traitor -  not a patriot. Nor is she a damned martyr. She and the rest of the MAGA mob were trying to break into the main chamber where lawmakers were huddled and it was the Capitol cop's job to put an end to that effort using his weapon.  She had been warned with the other gangsters and ignored it.

The words of Rep. Adam Schiff rang out clearly last night on 'All In', endorsing the Select Committee, i.e.  "We are not going to simply turn away from this terrible tragedy. We are going to get to the bottom of it."

This will be to find out what went into this insurrection, why didn't we see it coming,  what was the status of the intelligence and was it shared?  And most important, how do we protect from something like this in the future?

The pathetic WSJ letter writers, and the Repugs in the Senate, can bury their heads in the sand if they want- but no normal citizen can let this assault against the Capitol and our democracy simply slip into oblivion without turning over every dastardly input that caused it.  Most importantly, the select committee - like the House Select Committee on Assassinations - sets down a historical marker for the events.  This assures it will find its way into the history books, never mind the Repukes.  As Adam Schiff noted, they want nothing done on any bipartisan commission   or select committee-  because:

"They are afraid it will show complicity among their members in propagating the big lie and fomenting the insurrection.  That's why they don't want this to see the light of day, and most particularly Donald Trump doesn't."

As indeed the GOP fear and obstruction did show complicity, with 147 in the House seeking to halt Biden's electoral college certification and assorted seditionists in the Senate - including Josh Hawley and Ted Cruz - seeking to overturn the valid election results to turn the U.S. into an official banana republic.

Whether half the country disdains the committee's findings is immaterial.  The point is this flag must be planted or this nation and its core principles mean nothing.  So we can't leave it to idiots or the ignorant to dictate.